On June 13, Chevron Corporation (NYSE:CVX) closed a deal with the Republic of Chad to divest its assets in the landlocked African country. Chevron sold its 25% interest in seven oil fields in the Doba basin in southern Chad, along with its 21% stake in a pipeline system that carries crude oil to the Cameroonian coast, for $1.3 billion.

Last year, the seven oil fields averaged a net crude oil production of 18,000 bbl/d. The holdings were an important part of Chevron's presence in Africa and were profitable, but the company saw the present as "an ideal time for a divestiture." Chevron gave no details on why it saw the present as an ideal time to divest, so let's dive into some of the factors that may have driven that assessment and what impact this decision will have on Chevron and its competitors. 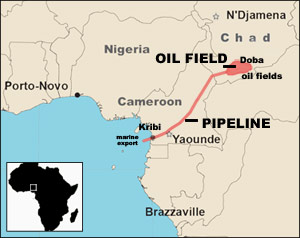 Chad's oil production is heavily concentrated in the Doba oilfields in the country's south, close to the border with the Central African Republic. Although the CAR has suffered chronic instability for decades, the recent unrest has been especially severe.

In March 2013, a loose alliance of armed groups known as the Seleka seized power in a coup and later turned on each other. Civilians were caught in the crossfire. Foreign fighters from surrounding countries, including Chad and Sudan, have entered the CAR and exacerbated the conflict.

The CAR now faces a serious humanitarian crisis. Nearly 1 million people have been displaced since December 2013. 70,000 CAR refugees were accepted into Chad between December 2013 and March 2014. Chadian forces in an African Union-led security force intervened in the CAR last December, but were withdrawn in April after allegations of violence against civilians and siding with Seleka groups. Due to geography and population transfers, it is not far-fetched that the violence could spill over into Chad -- even in the face of the Chadian government's decision in May to close the border between the two countries.

Corruption and poor performance
Several things threatened the profitability of Chevron's assets. For one, Chad has enduring problems with corruption. Furthermore, the Chad-Cameroon pipeline was carrying just 50% of its daily transport capacity of 250,000 bbl/d. Production from the oilfields declined to 18,000 bbl/d last year from 22,000 bbl/d in 2012.

Corruption and declining production make Chad a less attractive place to do business, even without the potential unrest.

Chevron's strategy and priorities
Chevron plans to divest $10 billion in non-core assets by 2017. Selling its Chadian assets is a tactical move that supports Chevron's strategy of focusing on upstream growth from shale/tight oil and gas, liquefied natural gas (LNG), and deepwater reserves. An aspect of Chevron's strategy is to decrease capital expenditures, which have skyrocketed in the past several years. 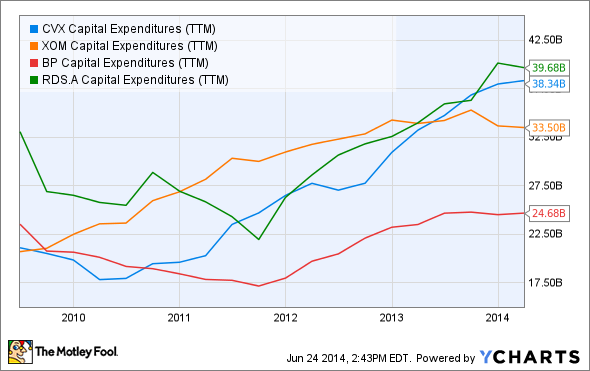 Chevron currently has higher capital expenditures than all of its major competitors except Royal Dutch Shell plc. When Chevron announced in January that 2013 net profits declined 18% from 2012, investors were unhappy and its share price took a hit. By cutting back on capital expenditures, Chevron will be focusing its operations, trying to maximize revenue while minimizing costs.

Who may benefit from Chevron's exit
Last year, the Chadian government announced plans to triple its oil production by 2015. The country's oil reserves are estimated to stand at 1.5 billion barrels. With Chevron now out of the picture, companies willing to accept the risks and challenges of doing business in Chad stand to gain opportunities.

1. ExxonMobil Corporation (NYSE:XOM)
ExxonMobil is the operator of the Chad/Cameroon Development Project, including its oilfields and pipeline. The company has a 40% share in the consortium responsible for developing Chad's hydrocarbon resources, making it the consortium's largest shareholder.

Although the Chadian government now owns the 25% share formerly held by Chevron, it may opt to sell some of its share in the future to raise funds or attract expertise. It could be beneficial for both ExxonMobil and the government for the share to be sold to the company, given that ExxonMobil is the consortium's largest shareholder and project operator. If the government sold over 10% out of its 25% share, ExxonMobil would become the majority shareholder.

However, a scenario such as the one described above would likely require more productive relations than currently exist between the government and ExxonMobil. The government sued the consortium for over $830 million in unpaid taxes in March. ExxonMobil is pursuing an out-of-court settlement.

2. Glencore Xstrata plc. (LSE:GLEN) and Caracal Energy Inc. (LSE: CRCL)
Glencore Xstrata financed Chad's $1.3 billion purchase of Chevron's assets. The top commodities firm purchased Caracal Energy in April for $1.35 billion, and had previously purchased stakes in five Chadian oilfields from Caracal in 2012. Glencore Xstrata now holds export marketing rights for 90% of the country's oil. The firm enjoys good relations with the government and would be well-positioned to buy any stake the government sought to sell.

Foolish conclusion
Trends in the energy sector, including rising capex costs, have pushed Chevron to change its strategy. Selling its Chadian assets was a good decision because of the region's instability, the declining production of the assets, and the disappointing transport volume carried by the Chad-Cameroon pipeline. However, Chevron's exit opens up opportunities for competitors pursuing different strategies in the potential-filled region.