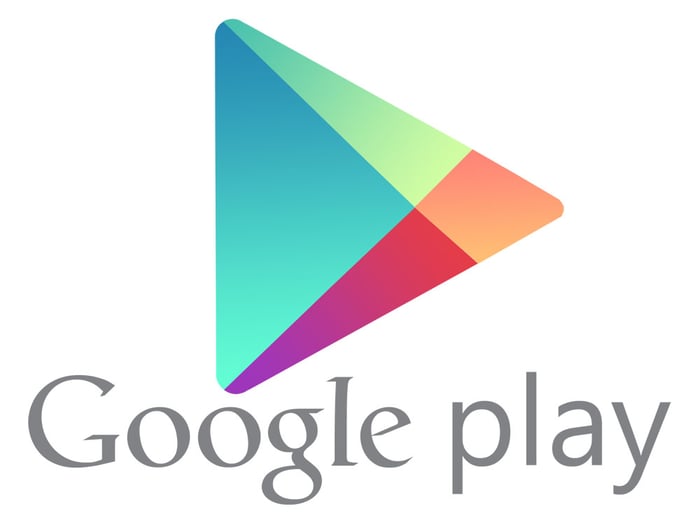 For a business valued at nearly $400 billion, Google (NASDAQ:GOOG)(NASDAQ:GOOGL) has demonstrated a surprising aptitude for maintaining impressive growth. With the company already working from an enormous base, revenue in Google's most recent quarter jumped a solid 19% year over year to $15.42 billion. But if a recent report from data analytics firm App Annie is any indication, one of Google's most promising businesses is just getting started.

Growth-hungry investors, meet Google Play, the search giant's one-stop digital shop for everything from mobile apps and music, to magazines, video, and books.

Google Play is exploding (in a good way)
True to its name, however, App Annie focuses mostly on crunching app-related data. And in the case of Google play, those metrics alone happen to be quite impressive.

First, App Annie notes there are now well over 1.5 million apps on Google Play, which represents an increase of roughly 60% since the beginning of July 2013.

But wait, you say, this doesn't seem all that impressive. After all, just last week Amazon (NASDAQ:AMZN) announced its Appstore selection had nearly tripled year over year. And you'd be right, but note Amazon was working from a significantly smaller starting point, and its Appstore now sits at "just" 240,000 apps and games. In terms of numbers of apps over the past year, this means Google Play has effectively added the equivalent of more than two Amazon Appstores to its running total.

Meanwhile, though Google Play's number of app downloads in the first quarter rose "just" 50% year over year, Google has done an excellent job monetizing that base; Google Play app revenue increased 140% over the same period. Within that, revenue originating from Google Play's games accounted for nearly 90% of total Q1 sales. And by May of this year, the vast majority -- or around 98% -- of total Google Play revenue originated from in-app purchases within freemium-style apps.

In dollars, please?
So we've got the percentages, but what about specific dollar totals? Unfortunately, Google doesn't break down Google Play revenues just yet, so we're out of luck there. However, we can glean some interesting insights from recent events.

For one, following its first-quarter report in April, Google chief business officer Nikesh Arora told investors it introduced Google Play movies to 39 new countries last quarter. This more than doubled its total number to 65 countries whose consumers can now rent and buy movies through Google Play.

In addition, Arora said more than 75 million new users had joined Google Play Games over the previous six months alone, which meant Google ended up paying out four times as much money to developers in 2013 compared to 2012.

Even better, at the annual Google I/O conference earlier this week, the company told developers the number of new Google Play Games users has accelerated even further to 100 million new accounts in the last six months. As a result, Google is planning to make Google Play Games one of the core pieces of its impending new Android TV offering.

We also know Google Play sales are likely crammed into Google's vague "Other Revenues" category, which increased 48% year over year in Q1 to $1.55 billion, or just 10% of Google's total revenue. By comparison, Apple's rough equivalent in its "iTunes, software, and services" segment turned in revenue of $4.573 billion last quarter, good for a modest increase of just 11% over same year-ago period.

This in mind -- and even assuming Google Play represents a large chunk of Google's "Other" revenue stream -- suffice to say maintaining anywhere near its current rate of growth could significantly impact both Google's top and bottom lines for the better.

In the end, that's why Google Play should be music to investors' ears.