World Wrestling Entertainment (NYSE:WWE) is looking pretty shaky this year, almost as though Seth Rollins body slammed its stock into the mat. After a big run-up in 2013 and a strong start to the current year, shares of the wrestling federation fell harder than Big E after going up against Rusev, and the stock is now down more than 60% from its 52-week high. What gives?

The short answer is the WWE Network, the wrestling league's subscription streaming service that is replacing the current pay-per-view model. For $9.99 per month, subscribers will receive 24/7 programming that includes access to WWE's live programming as well as its extensive video-on-demand library that at launch at the end of February had more than 1,500 hours of video available for viewing. 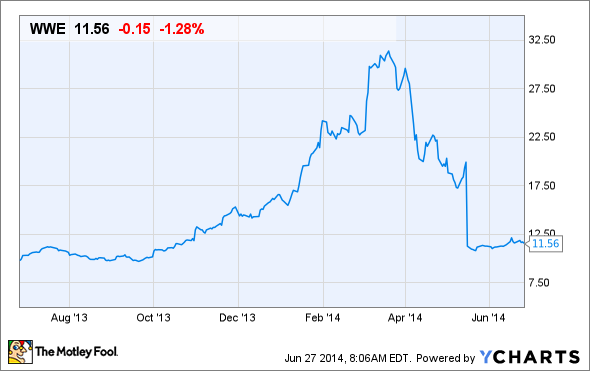 Basically, if you're already viewing at least two pay-per-view shows now, which can cost about $45 each, it's a no-brainer to sign up for the mandatory six-month commitment period (you can't just test it for a month then quit). Even those who might only watch one pay-per-view show still might consider it since there's a lot more programming that will be available and it represents a big overall pricing discount. The problem for World Wrestling Entertainment is whether it can generate the support necessary to finance the new model.

WWE says it needs anywhere from 1.3 million to 1.4 million subscribers in order to replace profits it will lose by eliminating pay-per-view, and has a goal of 1 million subscribers by the end of 2014. First-quarter results issued on May 1 show the difficulty it's going to have getting there, as it recorded a net loss of $8 million, or $0.11 per share, compared to the $3 million profit, or $0.04 per share, it gained in the year-ago period. Worse, its guidance for the second quarter reflected widening losses, as much as $18 million.

As of April 6, WWE had 667,287 Network subscribers, meaning for its streaming service to hit 1 million it's going to need a 50% surge in viewers. It's doing that by slashing the cost of watching a wrestling program. If someone were to watch all 12 pay-per-view events, they'd pay around $540 total; a full year's Network subscription will run just $120. That's a major hole to plug, so it's clear WWE is hoping the deeply discounted price will make up in volume what it's losing in per-show value.

It's argument is that when you combine subscribers with its already existing pay-per-view members, the 1 million viewer number is doable. Because they get access to live events they would need to otherwise pay for, it becomes a compelling option to WWE fans.

According to Forbes, the WWE has some 97 million "active" fans and there are 50 million U.S. households that have at least one fan. In terms of television viewership, the only sport bigger than wrestling is the NFL, with WWE's programming being the top-rated shows on USA Network and SyFy. The WWE brand is among the top "most talked about" on Facebook and it has over 4.4 million followers on Twitter.

Its social media presence is certainly top-notch, so transforming itself into a digital media powerhouse, as its Network seeks to do, and changing it from a network broadcast sports organization into a Internet-based entity, certainly has potential. Investors, though, remain skeptical about its being able to pull it off. Accustomed as they are to its traditional network TV revenue model, the change is scary.

But at 15 times earnings estimates and less than two times revenues -- and factoring in the incredibly loyal fan base it possesses -- World Wrestling Entertainment's valuation may have been thrown to the mat, but it's not down for the count. Like one of its life-altering story lines, investors ought to expect a dramatic comeback with a chest-thumping performance at the end.

After Nearly Doubling, Why Is World Wrestling Entertainment Stock Down 30% in 2014? @themotleyfool #stocks $WWE Next Article
Current