Many have speculated Apple (NASDAQ:AAPL), Facebook (NASDAQ:FB), and Google (NASDAQ:GOOG) could take down the biggest banks if they moved into the financial landscape. But one recent survey revealed the technology firms would face a long and difficult battle if they ever made such a bold move.

The bright belief
All signs are pointing to the three technology titans entering the payments landscape. Google already has a position through Google Wallet. Facebook is reportedly preparing to obtain regulatory approval in Ireland, which would allow it to issue digital credits that can be turned into cash. And Tim Cook of Apple said plainly in January, "[T]he mobile payments area in general is one that we've been intrigued with, and that was one of the thoughts behind Touch ID."

Knowing the likely movement of the companies into the payment sphere, the next supposed step would be into the actual banking industry.

After all, more than two years ago popular technology website Gigaom ran a story titled, "What is the next industry Apple can disrupt? Banking!" And in 2011 Businessweek ran "Facebook, Your Future Bank." And of course Google has its Wallet functionality, which in some ways allows it to mirror a bank.

With all that in mind, it's easy to think the banking industry is poised for disruption. But the three firms may face a tougher battle than anyone would like you to think.

The troubling truth
In a recent survey, consultancy Accenture found just 27% of individuals in North America would consider banking with an institution that didn't have branches. Of course, Google, Apple, and Facebook could build their own branches if they wanted to, but that would likely fly in the face of the Silicon Valley lure they offer. And that was just the beginning of bad news. 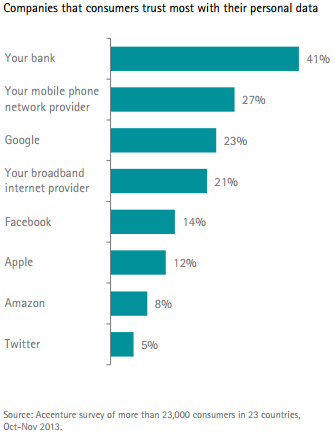 In addition, as shown in the chart to the right, consumers across the globe simply trust banks more with their personal data than everywhere else. While Google ranked higher than Apple and Facebook, the reality is, just 23% of people trusted it relative to the 41% posted by banks.

While this shows the hesitations people have when it comes to their data, the reality is, privacy concerns would be a major limiting factor for those firms in the technology industry.

Although 29% of individuals in North America said they would consider banking with Google or Apple if they offered the service, the reality is switching banks isn't something people do often. In fact, just 12% of people in mature markets had "switched to another bank for their primary account or other products within the past year."

And while banks face challenges in the future the study noted:

[B]anks also possess inherent competitive advantages in the digital world. They have large and relatively "sticky" customer bases; vast amounts of customer and transaction data; and valuable know-how in the field of payments, security, compliance, and financing -- all of which are difficult to replicate.

The thought of Google, Apple, or Facebook expanding into the banking world may seem to present an appealing and massive opportunity for both consumers and shareholders. But the reality is more and more signs reveal the such moves would likely be more difficult and costly than any of us first thought.