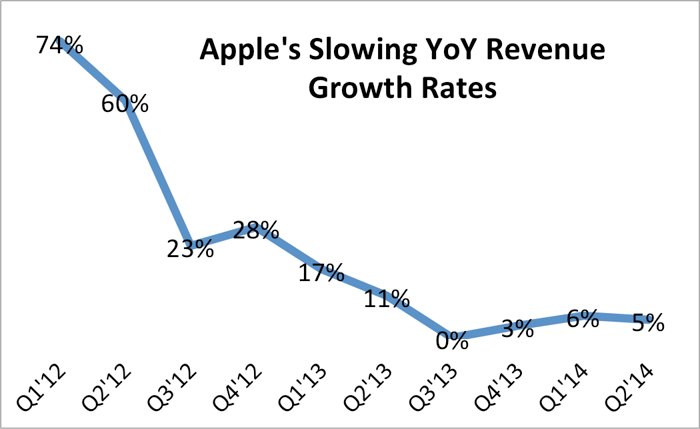 There are "factors at work," says independent Apple analyst Robert Paul Leitao, "which will lead to faster rates of revenue growth in the new fiscal year beginning this fall." In fact, Leitao estimates that next fiscal year revenue could approach $210 billion, up from a projected $182 billion this fiscal year. As Leitao explains, this would "handily surpass the Street's current consensus estimate of $194.19 billion in FY2015." Even more, a $200 billion top line would push Apple's year-over-year revenue growth back into the double digit rates. Can Apple really grow its monstrous top line so meaningfully?

While Leitao has a list of factors that will drive this growth, here are some of the most intriguing.

Plummeting iPod sales are becoming immaterial to results
The iPod had its day. But its day is over. Even Apple's price drop in its entry-level iPod Touch last week will not revive the dying line. 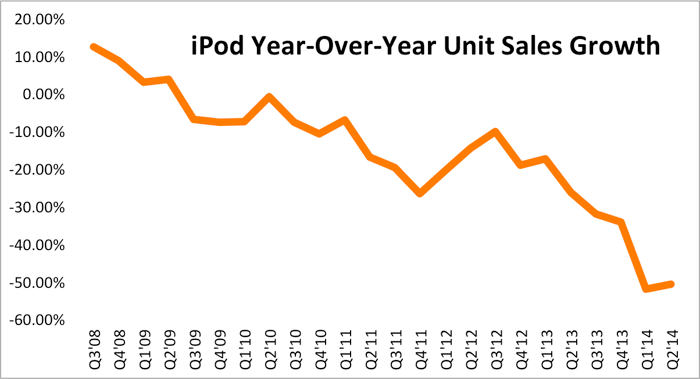 While the declining business used to be big enough to affect Apple's overall revenue growth rates, Leitao explains, the business is now becoming to small to even matter. This fiscal year, Leitao predicts the iPod line will contribute just $2 billion of revenue. While that number may sound big, it accounts for only about 1% of Apple's projected fiscal 2014 total revenue.

Moving forward, the iPod line will be essentially immaterial to the company's results in FY2015 as Apple's reported revenue will move above $200 billion. ... The net impact of the iPod line's demise is that next fiscal year Apple's reported revenue growth rates will reflect more the underlying growth rates of the company's three major device lines.

Hot, new products
The biggest driver of all for this surge in revenue growth rates? Apple's purportedly hot product pipeline of iPhone 6 phones with new form-factors and larger displays and the rumored iWatch

This estimate is inclusive of the expectation for larger-screen iPhones to debut this fall. Add to the FY2015 revenue mix the much-anticipated release of the iWatch line of accessories and Apple may deliver reported revenue growth of greater than 15% next fiscal year or total reported revenue approaching $210 billion.

Apple has been quite vocal about its confidence in its current product pipeline. Eddy Cue, Apple's senior VP of Internet software and services, even told Re/Code's Walt Mossberg and Kara Swisher at the Code conference in May said that Apple has "the best product pipeline I've seen in my 25 years at Apple" coming later this year.

While the iPhone line will have to grow organically to contribute to Apple's top line growth, the iWatch will be "wholly accretive to revenue," Leitao predicts.

Leitao's arguments are straightforward, sensible, and convincing. Of course both Leitao and I are unashamed Apple bulls, so you'll likely want to seek out a sensible bear case for the stock to develop a more objective view of the company's outlook. And when you find that sensible bear case, please let me know -- because I'm still searching.

How Apple, Inc. Will Get to $210 Billion in Revenue @themotleyfool #stocks $AAPL Next Article
Current