Apple (NASDAQ:AAPL) has slashed prices on its iPod Touch devices in hopes of slowing the product's revenue decline. The company remains a global superstar, but it has felt the pinch as Google's (NASDAQ:GOOG) Android operating system continues to dominate the global smartphone market, while Android and Amazon's Kindle Fire compete with the iPad for the tablet crown. Will the price slash prove enough to save the iPod, or should Apple move on to other projects?

The Wall Street Journal reported price cuts for the existing 32GB and 62GB models of the iPod Touch, which will drop to $249 and $299, respectively. Those prices represent a $50 savings on the 32GB and $100 off on the 62GB. Apple went a step further by releasing an upgraded version of the 16GB Touch that now includes a rear-facing camera and offers the wider color selection found in the higher-end models. The 16GB Touch will sell for $199, marked down from $229.

Apple needed to act in some way before iPod sales fell any further. Should Apple continue with the marketing schemes, or should it let the iPod die an organic death?

Fall of the iPod
The first iPod launched in 2001 and soon etched out a comfortable spot in pop culture. The line was popular but never grew to the level of the iPhone. Passing years have diminished the iPod's relevance, as smartphones and tablets became more commonplace and services including Pandora and Spotify altered how consumers can access music.

Sales have continued to decline for the iPod, with only the holiday boosts providing revenue peaks. 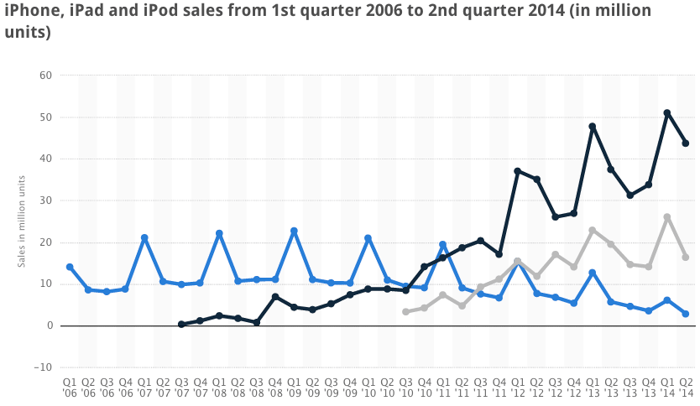 How far has the iPod fallen?
In the second-quarter report, net sales for iPods had dropped 52%, year over year, to $461 million and represented only 1% of overall revenue. Unit sales were also down 51% compared to the prior year's quarter.

Those drops would seem steep regardless of how the other products were performing, but the iPad tablets have also struggled to maintain sales growth. Revenue for iPads dropped 13%, to $7.6 billion, while the number of units sold dropped 16%.

Only the iPhone showed double-digit growth, with net sales up 14% to $26 billion and unit sales up 17%. Apple has maintained those sales even as Google's Android operating system has conquered the smartphone market with a larger price range of devices. According to Gartner, Android accounted for more than 78% of worldwide smartphone sales last year, while Apple held about 16% of the market. The wider price range of Android-equipped devices offers greater accessibility but has also led to OS fragmentation, which leaves Android more open to hacking and glitches than iOS.

With iPhone sales continuing to grow and new devices around the corner, why is Apple still bothering with the iPod?

Why won't Apple kill the iPod?
Rumors of iPod's death have swirled for years, yet Apple is now making a promotional push, complete with a freshened-up device. The company isn't ready to say goodbye.

One reason for saving the iPod might revolve around those Christmas sales spikes, which are declining but still offer a nice little seasonal boost for the company. Apple might also want to keep the iPod around for more sentimental reasons. The iPod was the product that changed the modern perception of Apple to that of a hip innovator. Plus, killing the line would mark the first major cut under CEO Tim Cook, who might not relish axing such an iconic product while he's still emerging from Steve Jobs' shadow.

Apple won't run into the ground by keeping the iPod active. The company generated $13.5 billion in cash flow during the second quarter. Those weakened iPad sales still total up to the billions. There's not a lot of risk in trying to breathe a few more years into the iPod line.

Foolish final thoughts
At the end of the day, an iPod Touch is essentially a call-free iPhone. The new pricing strategy might not substantially boost sales, but Apple can well afford to take the risk.