CONSOL Energy (NYSE:CNX) is continuing to evolve its business, with plans to form a master limited partnership. Walter Energy's (OTC:WLT) efforts to shift its coal footprint, meanwhile, have left it over-leveraged and bleeding red ink.

Change is constant, but not always good
No business can sit still and survive, with the buggy whip being a tailor-made example. That kind of explains why Walter Energy made the decision to increase its exposure to the metallurgical coal market. Thermal coal, used for producing energy, was increasingly being targeted by environmentalists. However, met coal, used to make steel, wasn't. And the same economic development that was leading to increased thermal coal use overseas was also leading to higher met coal demand.

And, better yet, met coal commands higher prices, making it a more profitable business than selling thermal. At least that was true in 2011, when Walter Energy paid around $3.3 billion to get more met exposure. That type of coal now accounts for roughly 95% of the company's business. Only since that point in time, met coal prices have plummeted. 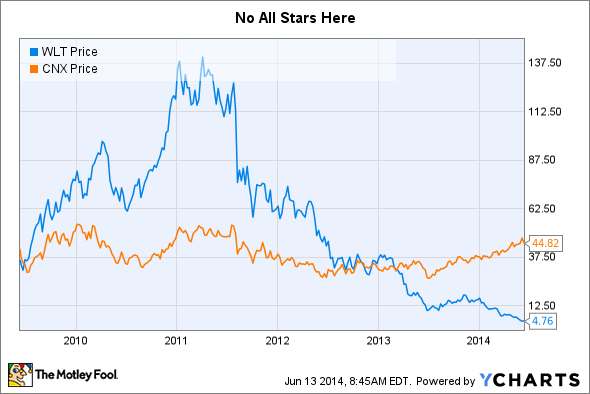 About a third of the acquisition cost was written off in 2012. That write-off, however, balances against the debt that Walter Energy used to make the met purchase. And that paints an ugly picture. Debt was a modest 20% of the miner's capital structure before the acquisition. After the deal, it was a manageable 50%. But after the write-off, it rose to a more troublesome 75% or so of the capital structure.

If met coal markets don't turn higher soon, Walter Energy could have a big problem on its hands. Although you could argue that most of the damage has been done, only the most aggressive investors should get aboard Walter Energy until it stops bleeding red ink -- something it's done for seven quarters running now.

Change is good
Change in the coal industry, however, isn't always a bad thing. For example, CONSOL Energy saw the environmental problems impacting coal, and also made a strategic shift. It shifted toward natural gas, which was quickly displacing coal in the U.S. power grid. For example, natural gas use for power doubled between 1995 and 2010. And the U.S. Energy Information Administration expects demand to keep going higher.

To help fund its gas efforts, CONSOL Energy sold off its oldest and least efficient coal mines. That changed the company from a coal miner with some gas assets to a gas driller with some really well positioned coal assets. However, even at that time, CONSOL Energy hinted that it might not be done. That's because it owns assets beyond coal mines and gas wells that management didn't believe the market was fully valuing.

That's why it's now looking to spin off its Marcellus shale gathering business into a limited partnership. That will start the process of highlighting the valuable assets hidden beneath CONSOL Energy's material energy businesses. It could also provide an avenue for future funding if CONSOL Energy decides to sell more midstream assets to the new entity. Some of the most notable assets inside CONSOL Energy include the Baltimore coal export terminal and its gathering operations in fields beyond the Marcellus shale.

Good and bad change
Walter Energy's move into met coal wasn't a bad decision, it was just poorly timed. It doubled down on a commodity when prices were peaking. That could lead the company down a road from which it can't recover. And the longer met coal prices remain depressed, the harder it will be for Walter Energy to ensure its own survival.

CONSOL Energy, which has also undergone big changes of its own, has charted a better, more diversified course. That said, its share price has plodded along for the past five years. Recent moves suggest management wants to change that, which means now could be a good time to jump aboard.