"In contrast to this have-to-be-smart-every-day business, there is what I call the have-to-be-smart-once business. For example, if you were smart enough to buy a network TV station very early in the game, you could put in a shiftless and backward nephew to run things, and the business would still do well for decades." -- Warren Buffett, 1996

When scouring the market for long-term investment opportunities, Berkshire Hathaway (NYSE:BRK.A) (NYSE:BRK.B) CEO Warren Buffett always looks for a solid "moat." A moat is a long-lasting competitive advantage. A business with a solid moat is likely to generate strong, consistent profits.

Companies in the media industry tend to offer strong moats, and none moreso than network TV stations. As a result, Buffett has made several significant media investments at Berkshire Hathaway. The best-performing of all these investments was the Washington Post Company (now known as Graham Holdings (NYSE:GHC)) -- which Buffett recently sold as a 100-bagger.

The beauty of network TV stations
Buffett's key insight about the broadcast TV business was that you didn't need to be a very smart entrepreneur to make a lot of money owning a TV station -- you just needed to be smart enough to buy it for a decent price.

According to Warren Buffett, broadcast TV stations have solid moats

The reason is that a relatively small number of broadcast TV licenses/frequencies were available in any given market. There were an even smaller number of TV networks. In the pre-cable era, this meant that each local TV market in the U.S. was dominated by a few TV stations that could command top dollar for commercials.

Even today, with the proliferation of cable channels and the rise of Internet TV, broadcast TV channels still tend to draw the biggest audiences. (For example, new episodes of popular network TV drama NCIS have regularly drawn 15-20 million viewers in recent years.) As a result, despite significant technological changes, broadcast TV stations remain quite profitable.

In addition to its flagship newspaper and some other businesses, the Washington Post Company already owned several TV stations in 1973. These were located in the Washington D.C., Jacksonville, and Miami markets. It added to its TV holdings in subsequent years.

It didn't take long for Buffett's bet to pay off for Berkshire Hathaway shareholders. By the end of 1983 -- just 10 years after Buffett started buying shares of the Washington Post Company -- his investment's value had risen from $10.6 million to $137 million!

Despite that relatively quick gain, Buffett was not interested in selling, because he recognized the favorable economics of the broadcast TV business and expected it to generate a steady profit stream. Indeed, he held on to all of his Washington Post Company stock for another 3 decades -- and the stock continued to rise. 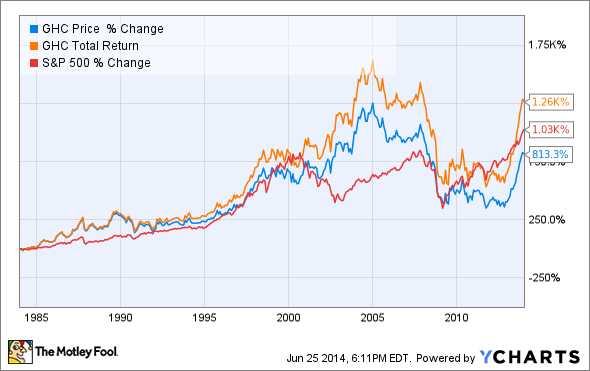 Buffett still loves TV
Warren Buffett's recognition that the Washington Post Company could practically print money thanks to its ownership of several TV stations helped him make more than $1 billion for Berkshire Hathaway investors on a $10.6 million investment.

Buffett is always looking for businesses that have strong moats, and apparently he still thinks broadcast TV stations fit the bill. When he finally decided to exit Berkshire Hathaway's investment in the Washington Post Company (now known as Graham Holdings), he didn't just sell his shares for cash.

Instead, he got one of Graham Holdings' top TV stations -- Miami-based WPLG-TV -- in exchange for Berkshire's Graham Holdings shares. (The deal also included cash and the return of some Berkshire Hathaway shares owned by Graham Holdings.) Buffett's love affair with TV stations isn't over yet: nor is his affection for businesses protected by solid moats.