The NPD Group reported earlier this month that U.S. customers ate 1.1 billion servings of bacon in the year ending April 2014, an increase of 6% compared to the previous year. This might be part of the reason why, on this coming Fourth of July weekend, Wendy's (NASDAQ:WEN) is bringing back its 2013 menu blockbuster: the Pretzel Bacon Cheeseburger .

The competitive fast food landscape has caused the industry's top players to go back to the basics. McDonald's (NYSE:MCD) is making breakfast a priority after a big 2013 menu miss, while Burger King (NYSE:BKW.DL) is creating new menu items derived from its classic Whopper.

The big question, though, is will Wendy's Pretzel Bacon Cheeseburger declare its independence this year and become a menu staple, or will it vanish again like it did in 2013?

Wendy's recent earnings compared to those of its two closest rivals
First-quarter fiscal 2014 earnings for Wendy's showed that revenue fell 13.3% to $523.2 million as a result of the disposition of 418 company-operated restaurants to franchisees, offset by income from rental and franchise fees. However, net income jumped $44.2 million to $46.3 million as a result of successful debt restructuring in 2013.

Breakfast has been a key theme among fast food companies recently. In particular, McDonald's has brought more focus to the breakfast segment by expanding its coffee offering and adding new breakfast items in the face of competition. May 2014 same-restaurant sales for McDonald's show that it is still underperforming in the U.S. with sales down 1% .

Burger King has recently decided to enter the "breakfast wars" by selling an item it already knows everyone loves -- burgers .

Burger King's stock price has been on its own run lately, up over 19% year-to-date. Even though it reported a revenue decline of 26.5% to $240.9 million in the first quarter due to refranchising costs, net income jumped 68.7% to $60.4 million on growth domestically and abroad. Same-restaurant sales went up across all four of its segments and this included 4.8% growth in its Europe, Middle East, and Africa, or EMEA, segment and 0.1% growth in the U.S.

One of several ads to promote the recently discontinued Tuscan Chicken on Ciabatta at Wendy's.  Credit: Wendy's

After investing in a nationwide campaign through T.V. commercials and social media outlets, Wendy's even invested in its first 'short film' to promote the Tuscan Chicken on Ciabatta sandwich before discontinuing the item.

Hits and misses are part of the fast food game. as McDonald's and Burger King know all too well. The infamous Mighty Wings failure will be on the minds of McDonald's management for quite some time, while Burger King's fall to No. 3 behind Wendy's in terms of U.S. sales is partly the result of its own menu misses.

Wendy's decision to bring back its 2013 hit may also be explained by simply looking at its same-restaurant sales numbers for the past several quarters. As shown below, same-restaurant sales jumped in 2013 when the Pretzel Bacon Cheeseburger was on fire. Management likely wants to see if lightning can strike twice for the company. 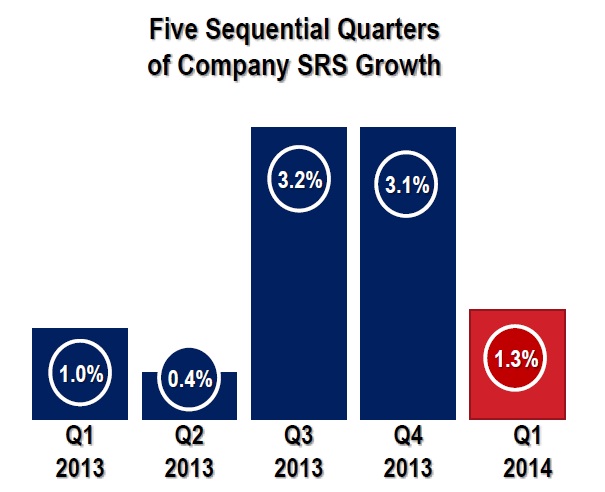 Since the departure of the Pretzel Bacon Cheeseburger, same-restaurant sales have fallen.  Credit: Wendy's

During its conference call, Wendy's management also acknowledged that competitors will likely replicate items like the Pretzel Bacon Cheeseburger in some way. This may be another reason for its return.

Overall, there is a good chance that the Pretzel Bacon Cheeseburger will have a longer stay this time around.

First, the restaurant margin outlook given by the company highlighted issues with rising commodity costs. Beef prices, in particular, caused Wendy's to reduce its margin outlook by nearly 0.5% even though only about 20% of its total commodity cost is beef-related. The ability to market the sandwich in the $5 price range may allow Wendy's to hedge against rising beef costs -- something it wouldn't be able to do with menu items at lower price points.

Second, the long-term same-restaurant sales outlook of 3% doesn't fit with the first quarter's performance. Looking at the figure above, it is clear that Wendy's needs the Pretzel Bacon Cheeseburger now.

Will the pretzel bun duo stay this time around? Credit: Wendy's

Wendy's customers have spoken in recent months. Although both the burger and chicken sandwiches with the pretzel bun cost $4.99 and $5.09, respectively, so they cost more than the other LTO sandwiches introduced since July 2013, customers clearly favor the pretzel bun.

In the end, only Wendy's knows if the Pretzel Bacon Cheeseburger will find a permanent place on the menu this time around.