Sempra Energy (NYSE:SRE) isn't on too many lists of top dividend stocks. Currently, Sempra Energy's dividend yield is just 2.5%, which is well below higher-yielding utility peers like Consolidated Edison (NYSE:ED) and its 4.4% yield, or  FirstEnergy's (NYSE:FE) 4.2% payout. However, the company is expected to grow its earnings twice as fast as its peers through the end of the decade, which could fuel big dividend increases at Sempra Energy. The question is -- will it be enough to turn Sempra Energy into a dividend investor's dream stock?

Utilities aren't known to be growth stocks. Instead, most utilities are focused on generating predictable cash flow that can be distributed to investors via dividends. What's unique about Sempra Energy is that it, too, is focused on generating predictable cash flow, so its risk profile is similar to both Consolidated Edison and FirstEnergy. However, in addition to that low-risk profile, the company is loaded with earnings growth potential. Currently, Sempra Energy expects to grow its earnings by 9%-11% per year through 2019, while its peers in the utility sector are only expecting about 5% annual earnings growth during that same time frame.

As the following slide notes, the company has a number of development opportunities in its pipeline. 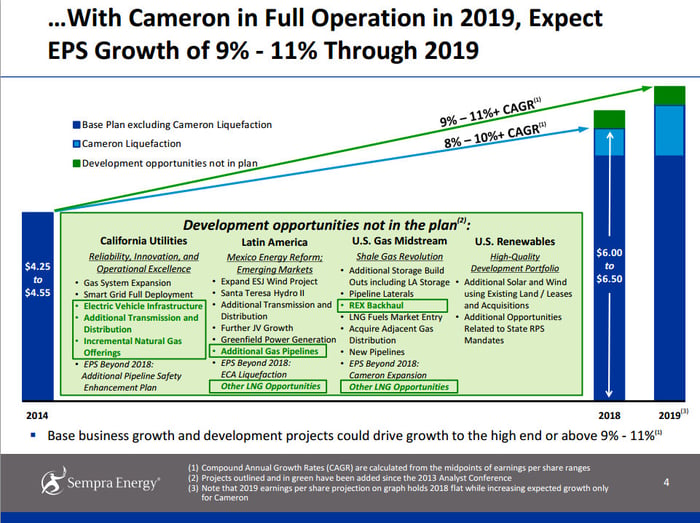 Among its biggest growth drivers is the Cameron LNG export facility, which is expected to be fully operational by 2019. That project alone could add $350 million per year to Sempra Energy's earnings, which is a big step up for a company that's expected to earn about $1.1 billion this year. Beyond that, Sempra Energy has plenty of growth projects in development at its international operations, as well as in its renewable segment. Further, Sempra Energy has additional growth opportunities not currently within its plan that could grow its earnings more than current projections.

Utility peers Consolidated Edison and FirstEnergy don't have that same growth potential. Consolidated Edition's growth, for example, will come from investments in electric infrastructure to support the growth of New York City. During the past five years, Consolidated Edison has grown its rate base by a compound annual rate of 4.65%, which is about the rate investors can expect going forward. Meanwhile, FirstEnergy is focusing on growing its transmissions segment so that it can offset the struggles of its competitive operations. First Energy's plan will continue to support a strong dividend, but overall growth will be limited.

Falling from the bottom line to investor's pockets
Faster earnings growth at Sempra Energy should deliver faster dividend growth than its peers. It's quite possible that the company will grow its dividend right in line with earnings growth through the end of the decade. If that happens, it would make today's current yield a bit more compelling. Take a look at the following chart, which projects Sempra Energy's dividend yield at the current stock price if the company grew its payout by 9% per year.

Investors who buy and hold Sempra Energy's stock could lock in a yield that will grow to nearly 4% by the end of the decade. That's solid, but investors can lock in a higher yield today at either Consolidated Edison or First Energy, both of which should continue to deliver dividend growth in the low single digits.

Taking that a step further, even if Sempra Energy is able to grow both its earnings and its dividend by 11% each year through the end of the decade, it will have a hard time matching the dividend rate investors can get elsewhere already. As this next chart shows, even at an 11% growth rate, investors would only lock in a 4.28% rate at today's stock price.

Investor takeaway
Investors are paying a high price for Sempra Energy's growth. That has pushed its current dividend down to the point where it's really not all that compelling. Further, even with all that growth, investors can lock in better dividends elsewhere with slower-growing peers like Consolidated Edison and FirstEnergy. So, despite the compelling earnings growth rate, Sempra Energy isn't about to become a dividend investor's dream any time soon.