The Dow Jones Industrials (DJINDICES:^DJI) set their 13th record of the year on Wednesday, posting a 20-point advance that brought the average to within 24 points of the 17,000 level. Even as second-quarter earnings season looms large in the near future, investors are still paying close attention to economic data, and tomorrow's key report on the jobless rate and nonfarm-payroll jobs creation has the potential to move the Dow. Let's look at what investors are expecting tomorrow and how the results could affect Dow components Wal-Mart (NYSE:WMT) and McDonald's (NYSE:MCD) in particular.

Currently, economists expect the economy to have created 215,000 jobs in June, roughly unchanged from May's report, and for the unemployment rate to stay at 6.3%. As you can see below, those figures would be consistent with the long-term drop in unemployment and the ongoing steady creation of jobs since the recession ended. 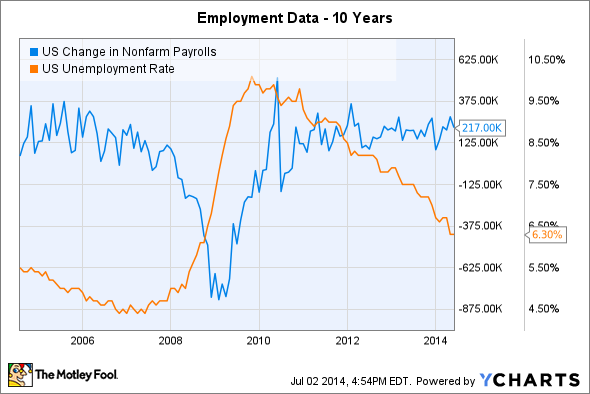 US Change in Nonfarm Payrolls data by YCharts

Yet when you look behind those employment numbers, one troubling trend emerges. Even as the unemployment rate has fallen sharply, so too has the participation rate among working-age Americans in the labor force: 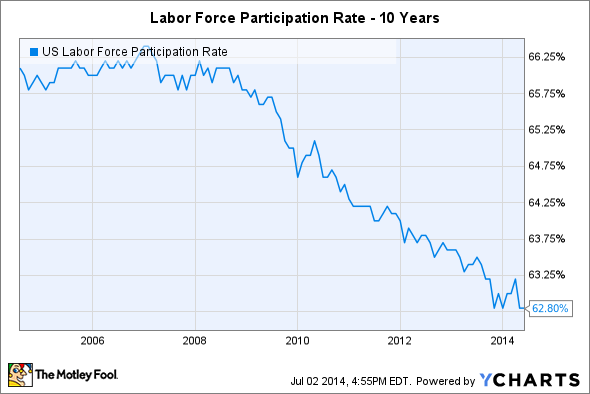 What that figure suggests is that many people are simply leaving the labor force. Even though those people don't have jobs, they're not counted as unemployed for purposes of determining the unemployment rate. As a result, the decline we've seen in unemployment is in some ways illusory if those non-participants have given up out of frustration rather than by choice.

What to watch for
Nevertheless, today's report on private job creation was much higher than investors had expected. While some doubt whether the private data will match tomorrow's government report, any support for employment will have significant economic impact.

In particular, both Wal-Mart and McDonald's have seen sluggish growth, and part of the cause of their troubles stems from the failure of many lower-income and middle-income workers to participate in the economic recovery. Wal-Mart has cited changes to food-stamp programs as part of the cause of recent sales disappointments, and McDonald's has recommitted itself to its value-menu strategy in order to woo those of lesser financial means through its doors. As their customer base becomes better off, both McDonald's and Wal-Mart have the capacity to win more of their business and finally pull out of the difficult times they've had lately.

A strong employment report tomorrow could easily give investors the boost they need to send the Dow Jones Industrials above 17,000. Whether they stay there, though, will depend on continued strength in the economy both in the U.S. and across the globe.