The wisdom of the so-called "buy and hold" strategy to equity investing will perhaps never go out of style. Besides the inherent tax advantages, it's the only method known to produce exponential gains consistently over the long term.

Biotech investors are certainly aware of the rewards that come with buying and literally never selling promising companies, even as they go through the typical speed bumps associated with clinical and regulatory pathways. Investors that purchased the IPO of Intercept Pharmaceuticals (NASDAQ:ICPT) in 2012 without selling in the interim, for example, have been richly rewarded with gains topping 1,000%. 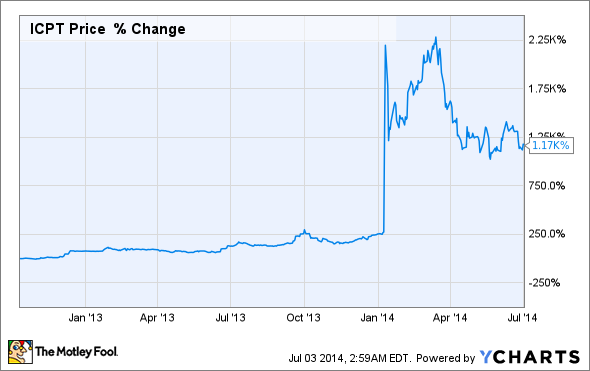 Intercept's parabolic move upward last January was catalyzed by its experimental treatment for nonalcoholic steatohepatitis (NASH), called obeticholic acid (OCA). As a refresher, the drug's mid-stage trial was stopped early for efficacy, causing shares to jump over 500% in a single day.

What's key to understand is that there are no approved treatments for NASH, despite the disease growing at a monstrous rate in most developed countries due mostly to the out of control obesity pandemic. Moreover, NAFLD (nonalcoholic fatty liver disease, of which NASH is the more severe form) is expected to outpace hepatitis C as the leading cause of liver transplants in the U.S. by 2020, showing the clear need for new treatments.

Galectin is developing a treatment for advanced NASH with liver fibrosis
Given the stunning success of Intercept, Wall Street has actively been looking for the next home run in this untapped market. Fortunately, there are several companies racing to follow in Intercept's footsteps.

Galectin Therapeutics (NASDAQ:GALT) is a unique candidate among these contenders that investors might want to pay special attention to moving forward. Unlike other companies developing NASH drugs, Galectin is specifically targeting patients with advanced disease with liver fibrosis. Most importantly, Galectin is aiming to actually reverse liver fibrosis with its GAL-3 inhibitor, known as GR-MD-02.

To date, Galectin has completed enrollment for the second cohort in an early stage trial for GR-MD-02 as a potential treatment for NASH, with a top-line data readout expected by the end of next month. Previously, the company reported that the initial cohort of patients receiving the drug showed that it was both safe and well tolerated.

In sum, Galectin's drug is in the early throes of clinical testing, but the market opportunity for NASH, compared to the company's market cap of roughly $300 million, has caught the attention of Wall Street..

Foolish wrap-up
I think Galectin is an intriguing speculative biopharma that could be a compelling buy and hold candidate. With early stage studies wrapping up, we should see a mid-stage trial soon that may lead to an early regulatory filing -- akin to Intercept's drug, especially since the company has been granted Fast Track status for GR-MD-02.

That being said, Galectin will more than likely need to raise money soon, given that it only had $36.6 million in cash and cash equivalents at the end of the first quarter. Furthermore, the NASH market has attracted big name biotechs like Gilead Sciences (NASDAQ:GILD) that are developing their own competing therapies. Gilead's experimental drug for NASH called "simtuzumab" is clinically more advanced than Galectin's, meaning that GR-MD-02 will likely have to outperform competitors in order to gain market share.

In sum, Galectin is not without its risks moving forward, but its value proposition makes it a stock worth putting on your watchlist.