On Thursday, the Dow Jones Industrials (DJINDICES:^DJI) closed above the 17,000 level for the first time, as a surge in job creation, and an unexpected drop in the unemployment rate, made investors more comfortable about the strength of the economic recovery. Since hitting 16,000 for the first time last November, the Dow has seen the pace of its rise slow somewhat; yet more than two dozen of its components have contributed positively to its advance. For Procter & Gamble (NYSE:PG) and Pfizer (NYSE:PFE), however, the road to Dow 17,000 has been paved with modest losses, as the two stocks have faced their own challenges that have kept shareholders from sharing in the Dow's good fortune. 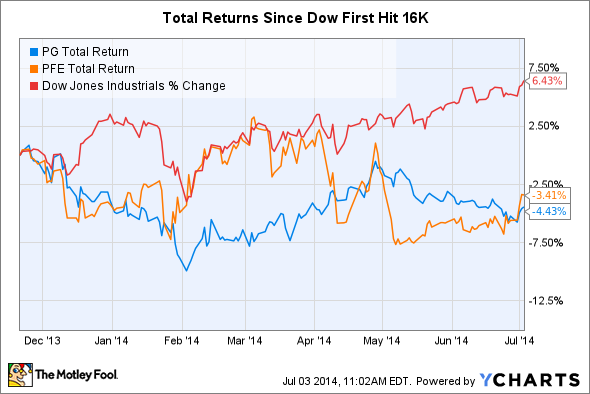 Procter & Gamble struggled during the winter months, with the stock declining to its worst levels in the days following its fiscal second-quarter earnings report in late January. During the quarter, organic sales rose by 3%; but adverse currency impacts held net sales flat compared to the year-ago quarter's results. Currencies also prevented the company from growing its profit, and Procter & Gamble's outlook for the full 2014 year for low- to mid-single-digit growth in revenue and earnings per share was relatively sluggish compared to valuations that give the stock an earnings multiple of more than 21. Fiscal third-quarter results announced in April raised similar growth concerns; but if a strong U.S. dollar finally gives way to a more normal foreign-exchange environment, then Procter & Gamble could see much better results in the future.

For Pfizer, meanwhile, much of the attention that the drug giant has gotten recently has come from its failed attempt to buy out British drugmaker AstraZeneca. Investors had liked the potential merger, not only because of the opportunity to merge drug pipelines and create synergies to reduce costs, but also because the merged company could have reaped substantial tax savings for Pfizer's business operations by adopting a U.K. tax home. In the end, however, AstraZeneca rejected multiple offers from Pfizer, indicating that the British company is only willing to combine at the highest possible price. That could be too much for Pfizer to pay, even for the extensive benefits available from the combination. Pfizer has plenty of prospects for success even without a merger, though, with drugs like its palbociclib breast-cancer treatment drawing positive attention from investors. With the potential to revisit a merger after six months, Pfizer has time to assess its own situation, and decide what to do later in the year.

The Dow's march to 17,000 has been relatively fast, and it's not surprising that it left a few stocks behind. With Pfizer and Procter & Gamble both having promising futures, you shouldn't count them out as the Dow continues to strive for further gains.