By buying up mature oil-weighted assets on the cheap, Denbury Resources Inc (NYSE:DNR) can use enhanced oil recovery techniques (EOR) to boost recovery rates and reward long-term investors. Through high-margin, low-decline assets, Denbury Resources can generate large streams of free cash flow that can be distributed back to shareholders via share buybacks and dividend increases.

Denbury has been steadily buying back shares over the past few years, but several months ago its management team decided to try something new. Denbury just initiated its dividend this year, and is already planning on doubling its payout. But before investors contemplate on whether or not to bank on Denbury's dividend, shareholders should take a look at how it operates. 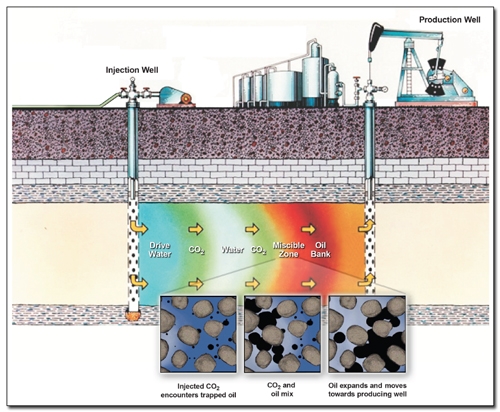 Denbury Resources produced 73,718 BOE/d (barrels of oil equivalent per day), 95% of which was oil, in the first quarter of 2014. Targeting old oil fields seems to have been a clever move by Denbury as it generates a $60 cash margin per BOE. What makes the high returns even better is that EOR operations tend to have a very low decline rate. For Denbury's operations, the initial decline rate averages between 10%-30%, which comes after several years of mild production growth. Shale wells, on the other hand, have first-year decline rates of ~70%.

With high levels of cash flow being generated from low-decline oil and gas assets, Denbury Resources has been generously boosting its capital return program to reward shareholders.

Committed to shareholders
It's hard to find a company more committed to giving cash back to shareholders than Denbury Resources. Denbury has bought back ~15% of its outstanding shares since the third quarter of 2011, boosting per-share metrics while still growing its operations. As of its latest quarter, Denbury still had $222 million remaining in its share repurchase program.

To further reward loyal long-term investors, Denbury paid out its first dividend ever this year of $0.25 per share on an annualized basis. This is just the tip of the iceberg, as Denbury plans to more than double its dividend next year to ~$0.55 per share on an annualized basis. Denbury currently yields 1.4%, which isn't very appealing to income-oriented investors. This is why management has decided to grow its payout by a whooping 220%. At $0.55 a share per year, Denbury would yield a decent 3.1% with room to grow.

Denbury Resources' funding plan seems reasonable, as it made an annualized $1.155 billion in adjusted cash flow from its operations in the first quarter of 2014. With its capex budget running at $1 billion and its dividend projected to cost $90 million this year, Denbury will most likely be able to cover the additional payout through production growth. A lower share count will also help.

Organic production growth and reserve upside
For 2014, Denbury is guiding for production to grow by 9% to 76,500 boe/d (low end of guidance). From 2015 to 2020, Denbury sees its production increasing by 4%-8% annually, which most likely will slow down over time as the production base increases. It is very important to note that Denbury is still expecting production growth even though its capex budget is expected to remain roughly flat at $1 billion per year over that time frame. This will provide Denbury with more free cash flow, and this can be used to fund its payout efforts while also reducing the share count; that's definitely a bullish combination.

Another very bullish catalyst for Denbury is the massive amount of reserve potential its assets could hold. At the end of 2012, Denbury reported 409 million BOE in proven reserves that was 80% weighted toward oil. By the end of 2013, that had grown to 468 million BOE weighted 83% toward oil. Factor in potentially recoverable reserves that could become proven over time through development and Denbury could be sitting on 1.25 billion BOE, 90% of which is oil.

If that were true, investors today would be paying just over $5 a barrel for a company that has a cash margin 12 times that. It's a company that is also doubling its payout next year and aggressively buying back shares. While Denbury Resources still has to keep digging up additional reserves to prove its lofty estimates, its ability to bring dead fields back to life can't be discounted.

Foolish conclusion
Denbury Resources is one of the most investor-friendly companies around, and is one that will soon become a strong income play. It has set out a plan to substantially grow free cash flow over the next few years, and management has guided for oil prices to average $90 a barrel in 2014 and 2015 before declining to $85 in 2016. Investors have already seen oil prices surpass those levels, and that happening again would further grow free cash flow through pricing upside. Combined with flat capex budgets and high single-digit organic growth prospects over the next six years, Denbury Resources could be a solid income play with growth potential.