Wade Michels
(DarthWader)
Author Bio
A former full time Fool, Wade believes in the bigger picture. Valuation is important, but so is having the ability to spot game-changing trends. He would rather pay a fair price for a great business than a great price for a fair business.

I confess, I enjoy World Wrestling Entertainment (NYSE:WWE). And if you're here, you probably like it too. You have to admire the passion the company instills in its fan base, who turn out in droves to watch their favorite Superstars do their thing.

These folks will pay up for T-shirts, hats, championship belts, and beer, just to get more from their experience. With over 350 million fans, the trending announcements on Twitter, and a seemingly endless supply of new and original content, at $9.99 per month, the WWE Network should be a no-brainer.

So why isn't it? Why have only 670,000 taken the plunge? The content is solid, the popularity is there: So where are the subs? 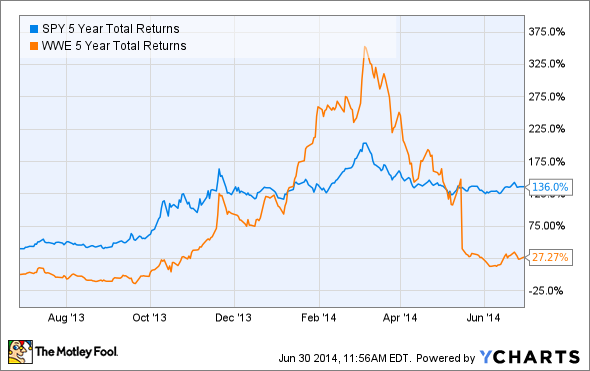 Have we seen this before?
For some perspective, let's look at Netflix (NASDAQ: NFLX). It you watch the broadcasts, the WWE network claims to be like Netflix only better. While that may be, the numbers don't support that claim. Netflix has a member base of over 48 million -- that's 72 times more than the WWE Network by its last count.

And that's OK. Netflix is a dominant force that has disrupted one industry and is working on disrupting another. But when it first started, it had a similar subscriber count as the WWE Network. Fast forward 10 years and Netflix has grown to more than $1 billion in quarterly streaming revenue.

Now, I'm not saying the WWE Network will grow up to be a Netflix-type juggernaut. But I am saying the precedent is there, the content is a great value, and there are enough fans to push the WWE Network way past where it is right now. For those interested in the rise of Netflix, perhaps you might find World Wrestling Entertainment interesting.

It's bigger than you think
World Wrestling Entertainment is popular ... strike that, it's very popular. From its recent investor presentation; it has the number 1 cable program, 350 million social media followers, is in 150+ countries, and has 2.6 billion YouTube views. All that adds up to a top 10 social media brand, according to the Dachis Group Social Business Index.

According to Nielson Media Research, average prime time views totaled 4.6 million for its flagship show Monday Night Raw. For perspective that was double the amount that watched ESPN. And its content is rich -- the company executes over 300 live events per year, it has 130,000 hours in its library, and it adds 500 hours or original programming to its lineup per year. If content is king, World Wrestling Entertainment produces plenty of it.

According to a recent WWE investor presentation, there are 116 million TV watching homes in the U.S. and 54 million of them don't care about the product. Well, that means that 53% or 62 million homes have some sort of love for sports entertainment. WWE estimates that 13 million are passionate about the company.

By last count the Network has 670,000 subscribers, so its growth potential is significant. Let's say a portion of its 13 million passionate fans eventually buy the Network. Management has stated that it needs 1.3 million to 1.4 million subscribers to break even. That means it needs to double its current count, or harvest just 10% of its passionate fan base, to make up for what it's losing in its pay per view business. Anything more than that, and we're talking about some serious outperformance.

Counterpoint
Judging by the recent collapse of the stock, many believe that the WWE Network will never make money. Those same pundits probably think the acting is equal to a bunch of bad one-liners from a Michael Bay movie. They also complain that the action is staged. And frankly, I would have to say they're mostly right.

Except for Dwayne "The Rock" Johnson, the performers are not great actors and the dialogue can get a bit goofy. But one thing the WWE does very well is put on a good show. Fans are aware that everything is bologna, yet they gobble the stuff up anyway. WWE no longer hides the fact that it is an entertainment company.

Once you get past that, you can start to appreciate the performances. It is 100% original and the WWE is the only one who does it well. Other wrestling organizations pale in comparison. The UFC is considered by many to be a sport, which makes it more of a threat to boxing than an entertainment company.

Foolish final words
So with all these data points, I think the only reason why the WWE Network isn't working is that it's only been around for a few months. I believe it needs time to push its platform. Time to work out the kinks, time to tap into just 10% of that passionate fan base.

With time, I think the WWE Network will be a major success. There are too many fans, there is too much content, and the value is just too good for it to fail. Ultimately, Vince McMahon may be thought of as a pioneer. If successful, the WWE may be the first of many companies that create a network so that customers can buy what they want, when they want.