Despite Dow 17,000, these three stocks lost ground last week. Find out why.

The Dow Jones Industrials ( ^DJI 0.00% ) made history last week, with a rise of 216 points carrying the average above 17,000 and reigniting investor interest in the stock market more broadly. Even though many investors have remained on the sidelines as stocks become increasingly expensive, the bull market shows few signs of stopping, and positive economic data are helping to support company fundamentals within many sectors of the market. Nevertheless, several Dow stocks missed out on the market's overall gains, with Microsoft ( MSFT 2.68% ), United Technologies ( RTX 1.49% ), and McDonald's ( MCD 1.61% ) being the three worst performers of the week. 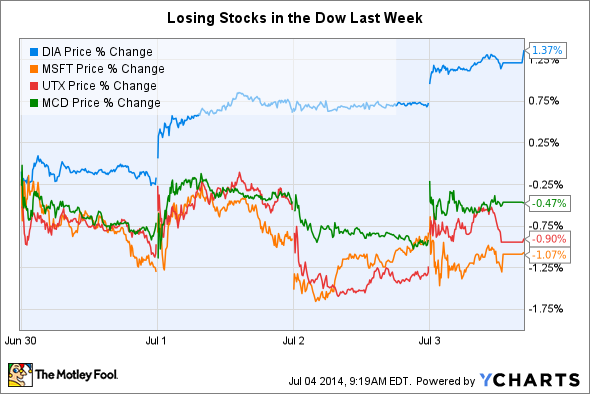 Microsoft fell more than 1% as investors weighed whether the tech giant's efforts to become more of a relevant player in high-growth areas of the sector will pan out. New products like the Android-powered X2 show Microsoft's new strategy of aiming to become more platform-agnostic, as the company admits that its lagging market share in the mobile operating system space has given it an insurmountable barrier to domination. Nevertheless, high hopes for the Surface Pro 3 and other proprietary hardware haven't panned out as well as investors had hoped, with Microsoft failing to get traction for the idea that a combination tablet/laptop can effectively meet the needs of users without making too many sacrifices. Despite ongoing strength in legacy software offerings, Microsoft still needs to establish its future direction to satisfy long-term shareholders.

United Technologies dropped almost 1%. The decline seems inconsistent with the general mood among investors, especially as fears about the first-quarter drop of 2.9% in U.S. gross domestic product start to give way to greater optimism about a spring recovery. With strength in its commercial aerospace business and support from the military side of its operations, United Technologies still appears laser-focused on its highest-margin opportunities. At the same time, if business conditions keep improving, then the rest of the conglomerate's businesses should benefit from higher demand for building-related services like elevators and heating and cooling systems. This week's drop seems more like a natural pullback from a year and a half of successive new all-time highs than a long-term threat to its future.

McDonald's fell half a percent as the fast-food giant suffered another defeat in its image. A Consumer Reports poll found that McDonald's ranked at the bottom below 20 of its peers for the perceived quality of its hamburgers. With the company having spent so much attention on revamping its menu to attract customers, ongoing dissatisfaction among some customers about its food has held McDonald's back in an increasingly competitive industry. McDonald's needs to take more dramatic action to restore its good reputation both in the U.S. and around the world.