"We get excited enough to commit a big percentage of insurance company net worth to equities only when we find (1) businesses we can understand, (2) with favorable long-term prospects, (3) operated by honest and competent people, and (4) priced very attractively." -- Warren Buffett, 1978 Berkshire Hathaway letter to shareholders

Do you wish you could invest like Warren Buffett? Luckily for you, the Oracle of Omaha laid out his 4 big rules for investing success in a Berkshire Hathaway (NYSE:BRK.A) (NYSE:BRK.B) shareholder letter more than three decades ago.

In 1988, Coca-Cola fit Warren Buffett's 4 criteria for a great investment

Buffett put his 4 rules into practice a decade later, when he invested in Coca-Cola (NYSE:KO). Not surprisingly, the investment was a smashing success. Within 10 years, Coca-Cola was a 10-bagger for Buffett. Despite a pair of recessions since 1999, Coca-Cola stock has maintained its value in Berkshire Hathaway's portfolio while generating billions of dollars in dividends.

Buffett's 4 rules
Buffett's first rule is simple enough. Buy stock in businesses that you can understand. There are surely tech start-ups you could invest in today that will crush the market in the next 10 years. But if you're not a technology expert, how will you find them? (Remember, if you're buying a stock, someone else is selling because he/she sees better opportunities elsewhere.)

Buffett's point is: why bother? There are businesses out there with good prospects that you can understand -- if you're willing to do some homework. Sticking with what you understand already gives you a leg up on a lot of investors.

Buffett's second rule is to stick to businesses with good long-term prospects. There are plenty of companies that have a good year from time-to-time -- but many of them don't have sustainable businesses. If you have any doubts that a company's products will still be sought-after in 10 years, that's a big warning sign.

The third rule is to buy companies with honest, competent managers. In many businesses, good management is the difference between generating steady profit growth and lurching from crisis to crisis. A management team with a long track record of success is likely to continue posting strong results.

Buffett's final rule is to look for attractively priced stocks. You should be able to find plenty of companies with good long-term prospects and talented management in businesses you can understand. If you overpay, you can still wind up with a poor result despite following the first 3 rules. If a business fitting the first 3 rules is really pricey, wait until you find another one that's cheaper!

Buffett's love affair with Coke
In 1988, Coca-Cola fit all 4 of Buffett's criteria for a great investment. First, it's really easy to understand the business of selling sugary drinks backed by one of the strongest brands in the world. In his 1989 shareholder letter, Buffett remarked that he became a loyal Coca-Cola customer more than 50 years earlier.

Second, Coca-Cola's brand name (and secret recipe) had kept the company on an upward trajectory for a century before Buffett first invested in the company. With international markets representing a huge additional growth opportunity, Buffett could feel fairly confident in Coke's long-term prospects.

Third, Buffett had great admiration for Coca-Cola CEO Roberto Goizueta, who led the company from 1980 until his death in 1997. While Buffett wished that he had bought Coca-Cola shares long before 1988, Goizueta's strong leadership during the 1980s was a key factor motivating Buffett's investment. Coca-Cola had posted solid earnings growth in the few years prior to 1988. 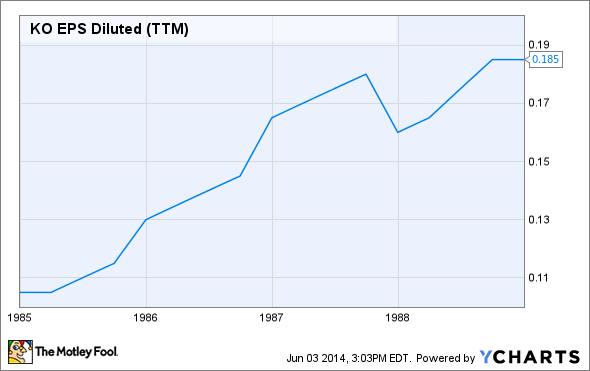 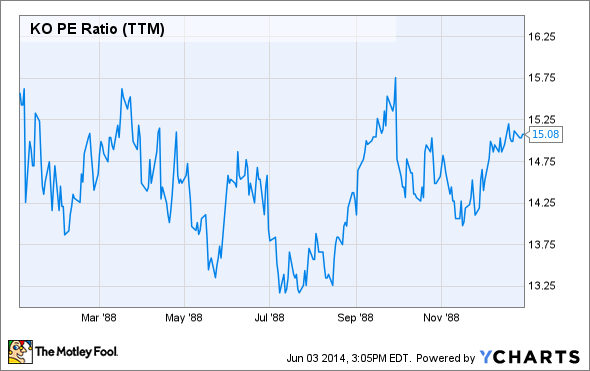 By the end of 1994, when Buffett stopped buying, he had put $1.3 billion to work in Coca-Cola stock, and that investment was already worth more than $5 billion. Once he had identified the opportunity, Buffett could relax and let Goizueta and his employees do the hard work. Two decades later, Berkshire Hathaway has not sold a single share. Its stake is now worth more than $16 billion, and produces nearly $500 million in dividends annually.

Foolish final thoughts
Buffett's first 3 rules of investing -- buy what you know, and stick to companies with good long-term prospects and good management teams -- are well-known by most Warren Buffett fans.

However, some Buffett admirers may be surprised by his focus on attractive prices. After all, Buffett also famously stated, "It's far better to buy a wonderful company at a fair price than a fair company at a wonderful price."

The two aren't really contradictory, though. Buffett always believed that the key to investing successfully was finding high-quality businesses. As long as you have a long-term mentality, it's possible to get a good return even if you pay a "fair" price -- not a great price. That said, the real home runs are when you find a great business at a bargain price. That is exactly what Coca-Cola was for Warren Buffett and his fellow Berkshire Hathaway investors.