It's getting increasingly difficult to pick a retailer with true competitive advantages. Murphy USA is one exception to the rule, having achieved double-digit return on capital ratios for the past five years.

In the ever-competitive retail environment, very few retailers have the ability to differentiate themselves and deliver superior financial returns. Murphy USA ( MUSA 3.56% ), a leading independent retailer of gasoline products and convenience store merchandise in the Southern and Midwestern parts of the US, is one of the notable exceptions.

It has achieved a return on capital employed ratio in excess of 11% in every year from 2009 to 2013. Murphy USA shares critical success factors with other successful retailers such as CST Brands ( CST ) and Hibbett Sports ( HIBB 1.92% ).

Asset ownership
While many companies have gone down the 'capital-light' path in recent years, Murphy USA has adopted an 'asset-heavy' strategy. It owns 90% of its stores and seven product distribution terminals, which allows it to keep both its operating expenses and fuel costs low.

Another peer which has similarly pursued an asset ownership strategy is CST Brands, a convenience store operator primarily in the Central and Southwestern states. It owns approximately 79% of the convenience stores it runs and therefore benefits from reduced rental cost volatility and lower exposure to lease expiry risks.

Rental expenses account for less than 0.5% of CST Brands' sales, which suggests that it isn't vulnerable to rent hikes from opportunistic landlords who seek a share of the profit pie. In addition, retail is all about location, location, and location. By owning most of its stores, CST Brands has greater control over its prime locations.

Like CST Brands, Murphy USA owns most of its stores and the results speak for themselves. Murphy USA incurs average monthly operating costs that are 44% less than those of the top quartile of stores by performance in the industry, based on the results of the 2012 National Association of Convenience Stores' State of the Industry Survey.

In addition, Murphy USA partially mitigates the risks of supply interruptions and increased distribution costs associated with delivering refined products to market because it owns a few of its product distribution terminals.

Benefiting from a retail giant's presence
While Wal-Mart ( WMT -0.30% ) has driven many small retailers out of business in the past few decades, many other companies such as Murphy USA and Hibbett Sports feed off of the foot traffic generated by Wal-Mart.

Sporting goods retailer Hibbett Sports focuses on serving small to mid-sized markets with populations in the 25,000-75,000 range. It tends to capitalize on the crowd-pulling effect of Wal-Mart stores by locating its stores in their vicinity and sells non-overlapping merchandise to capture part of the Wal-Mart shopper's wallet share.

A telling statistic is that approximately 79% of Hibbett Sports' stores are located in strip centers under the influence of Wal-Mart stores. Due to its ability to generate stable revenue streams by feeding off of the traffic from Wal-Mart, Hibbett Sport has managed to increase its top line in every single year of the past decade.

Similarly, Murphy USA has taken the relationship with Wal-Mart even further. As of the end of 2013, Murphy USA had 1,087 stores located close to Wal-Mart Supercenters and 31 stores situated at Wal-Mart Neighborhood Markets among its 1,200-odd locations. It inked an agreement with Wal-Mart in December 2012 which gave it the right to build 200 new stores at Wal-Mart locations over the next few years. Murphy USA estimates that there are about 1,204 Wal-Mart Supercenters that it has not covered in its core markets, which suggests a long growth runway ahead. 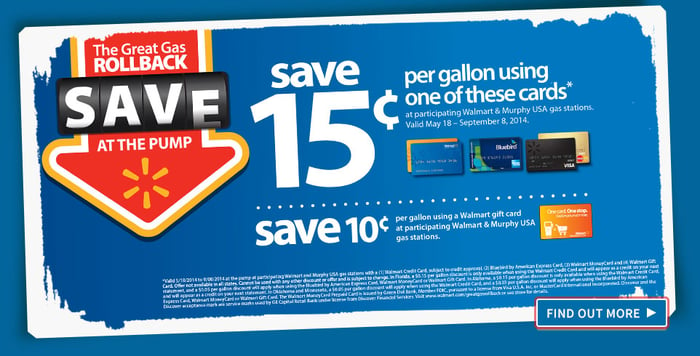 In addition, Murphy USA also works with Wal-Mart on a fuel discount program. Customers who use a Wal-Mart gift card, MoneyCard, or credit card will earn fuel savings of $0.10-$0.15 per gallon.

Foolish final thoughts
Murphy USA's high level of asset ownership and synergistic relationship with Wal-Mart are the two key reasons why it can maintain high profitability in a competitive market. With the potential to expand its store network to more locations in the vicinity of Wal-Mart stores, Murphy USA's growth prospects look equally promising.

Why Kraft Heinz Stock Might Offer You a Delectable Value