Goldman Sachs traded down in the Monday morning session, despite its positive outlook on the U.S. economy and the future of U.S. monetary policy.

Goldman made headlines unrelated to the stock's movement today, announcing a revised prediction for the Federal Reserve's interest rate policies. Goldman now expects the Fed to raise interest rates in the third quarter of 2015, half a year earlier than the banking giant's previous expectation.

A change in tune driven by an improving economy
According to Goldman Chief Economist Jan Hatzius, the updated projection was driven by "the cumulative changes in the job market, inflation, and financial conditions over the past few months."

In June, the U.S. economy trounced expectations and added 288,000 new jobs. The real-estate market looks as healthy as it has been in years. Consumer confidence continues to rise, while the disappointing first-quarter GDP numbers increasingly look like an anomaly -- the trade deficit widened on strong imports domestically and relatively weaker exports as the U.S. economy drives forward more powerfully than the global markets.

And don't forget that the Dow is trading above 17,000 for the first time ever.

Hatzius went on to say that Goldman views "this as an illustration of the substantial progress that the U.S. economy has made in overcoming the fallout from the housing and credit bubble." 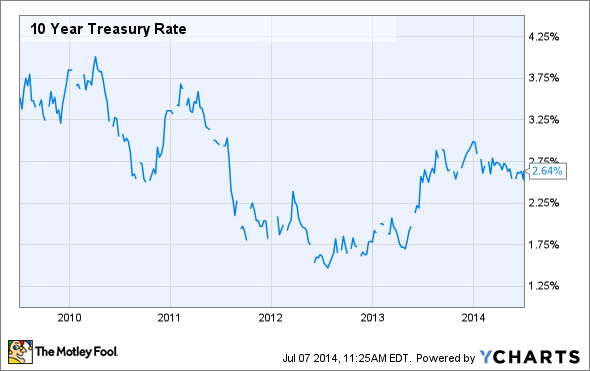 The easiest way to understand this rate and its impact is to consider your personal savings account. If a bank offered you 20% interest rate on your savings, you're very likely to keep your money in that bank. You'd forgo investing in stocks or real estate, because a 20% savings account is about as risk-free as you can get, with some smoking returns to boot!

On the other hand, if that savings account only offers 0.10% -- like many bank accounts actually do today -- you're much more likely to move your money into other investments to achieve higher returns.

The federal funds rate works essentially the same way. Banks deposit funds into the Federal Reserve, typically overnight, and earn a small amount of interest on that money. The higher the rate, the more likely banks will keep money at the Federal Reserve. Lower rates entice banks to loan that money out instead in search of higher yields.

This increased lending then helps boost the economy by putting capital into the pockets of businesses and individuals around the country. The only catch is that too much lending can create a spike in inflation. And herein lies the Fed's challenge when raising rates.

The downside to rising rates
If this is your first exposure to the world of changing interest rates, then up to this point you're probably thinking higher rates are nothing but positive. Rates rise when growth is strong and when unemployment is low.

Unfortunately, there's always a give and take.

Rising rates makes money more expensive. And that means that it's more challenging for businesses and individuals to afford new loans. Expensive money means lower spending, less investment, and lower returns on investment. It may mean the difference between a business taking out a big loan to build a new factory, or not. It can mean affording that new home versus not being able to make ends meet.

The risk is not just when rates rise, either. Rates that are kept too low for too long could stoke uncontrolled inflation.

Inflation today remains in check at a healthy level. However, rising inflation can crush even the most robust economies -- if prices rise too quickly, then the value of the money in your pocket can erode overnight, quietly stealing your wealth. 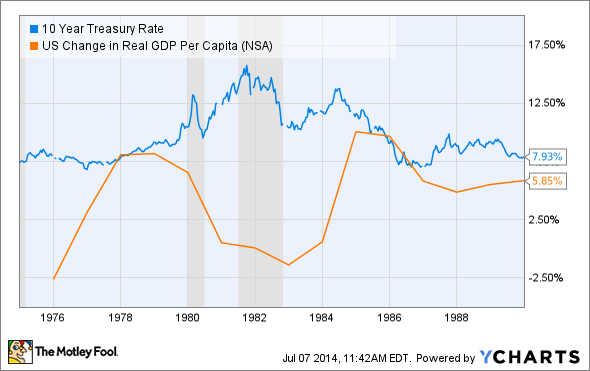 The only proven medicine for rampant inflation is high interest rates like the near-17% 10-year levels witnessed in the early 1980s. These high rates stifle growth and can easily send the economy into negative growth. Pick your poison -- short-term pain to solve inflation versus long-term stagnation.

The Fed must time the changing of U.S. interest rates late enough that the economy maintains healthy growth, but not too late such that inflation takes hold. This cuts to the core of Goldman's prediction today.

Managing interest rates is clearly an extremely delicate undertaking. It's balancing a see-saw without fully understanding how much weight is on either side.

That said, according to the economists over at Goldman, the timing of this shift is coming sooner than you think.