Alibaba will soon launch one of the most anticipated IPOs of the year. The China-based company owns a number of e-commerce sites that connect merchants and consumers that's more similar to eBay (NASDAQ:EBAY) and Etsy than Amazon.com (NASDAQ:AMZN). Alibaba has been valued between $170 million-$250 million by analysts ahead of the IPO, but what are some quick facts that investors need to know before diving in early?

1. Key Metric: GMV
Gross merchandise volume, or GMV, serves as one of the key monetization metrics for online retailers. GMV represents the total sales value of merchandise sold. Alibaba has a staggeringly high GMV compared to the competition.

Mobile GMV remains a growth area for Alibaba. The company reported $37 billion in mobile GMV last year, which accounted for about 15% of overall GMV. Compare those figures to eBay's mobile GMV of $22 billion-or 40% of total GMV. Alibaba still has room to gain more mobile users, though the fact that Alibaba accounted for over 72% of total mobile GMV in China means that the growth will likely come from other regions. 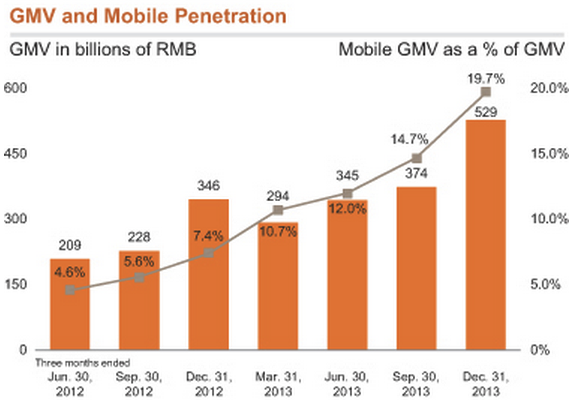 Investors shouldn't try to use these metrics for quick industry comparisons. Amazon and eBay don't report the same metrics in the same way so any potential comparison would come out as a rather apples-to-oranges comparison. That doesn't diminish the potential of the metrics as Alibaba continues to release more financial information; simply stick to the top-line metrics like revenue -- or GMV -- for industry comparisons.

3. Initial U.S. investment might look soft
CovergEx conducted a survey of 322 financial industry professionals and gauged the general interest in buying Alibaba. Overall, the respondents felt that Alibaba was a good long-term investment, but only 43% indicated an interest in buying Alibaba at IPO. The reason had more to do with the region than the company at question.

Only 30% of overall ConvergEx respondents owned shares in a Chinese company. Buy-side respondents were over 20% more likely to want in on the Alibaba IPO if they already owned equities in China. The hesitancy to take that first step into investments in the region could lead to weaker-than-expected U.S. investor interest.

Or, as ConvergEx Chief Market Strategist Nicholas Colas noted, a strong initial performance from Alibaba might provide the push needed for investors to take the chance on China. The deciding factor may well come down to how well Alibaba performs out of the gate, both in the acceleration of share price and the initial earnings releases.

Foolish final thoughts
Alibaba will likely accelerate following IPO with or without a strong initial interest from U.S. investors. Keep an eye on the GMV for industry comparisons and average orders per active buyers for a health snapshot aside from the obvious metrics like revenue and net income.

Long-term investors nervous about investing in China might want to use this new listing as a stepping stone into that market. The cautious will likely have plenty of time to keep an eye on Alibaba's metrics and still make it in at a decent price.