Editor's note: A previous version of this articled stated that NPAs were 7.2% of total assets as opposed to 0.72%. The Fool regrets the error.

In this post, we'll look at Webster Financial Corp. (NYSE:WBS), a $21.2 billion bank headquartered in Waterbury, Conn. You can find information on other banks at my Motley Fool article feed, available here. All data in this analysis was sourced from the FDIC's Quarterly Banking Profile and Capital IQ.

When I evaluate banks, I follow a model made famous by former Wachovia CEO John Medlin: soundness, profitability, and growth. As investors, we then take a look at valuation and the potential for investment after gaining a better understanding for each bank.

Webster Financial Corp. reserved $9 million for the first quarter, which represented 4.4% of operating revenue. That compares with 5% for the $10 billion-plus peer group, according to the FDIC.

Taken together, Webster’s soundness profile looks strong. The company has next to no non-performing assets and is still reserving a healthy bit of cash for the worst case scenario. This behavior by management is indicative of a risk management first culture. 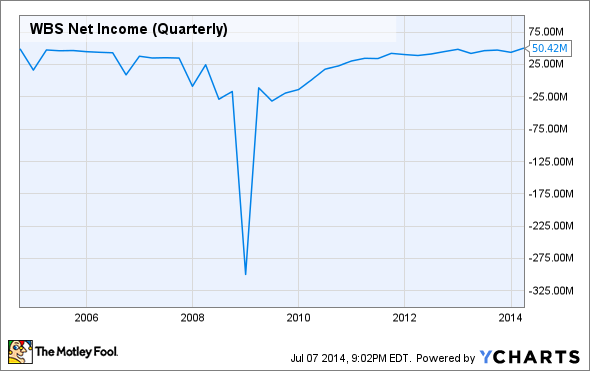 For Webster Financial Corp., the first calendar quarter of 2014 wasn't that bad. The company generated total net revenues of $205.1 million for the quarter -- that's total interest income plus non-interest income minus interest expense.

Over the past 12 months, Webster Financial Corp. has generated $763.8 million in total net revenue. Of that revenue, 76% was attributable to net interest income, the difference between interest earned on loans and paid out to depositors. The remaining 24% was through fees, trading, or other non-interest revenue sources.

The bank's primary focus is obviously on lending products, specifically to commercial and retail borrowers. The company does have a specific division that offers asset and wealth management, private banking, and other fee-centric businesses. However, based on the revenue mix it’s clear that Webster’s overarching focus is on the lending business.

The bank was able to turn a profit margin of 25% on that revenue. 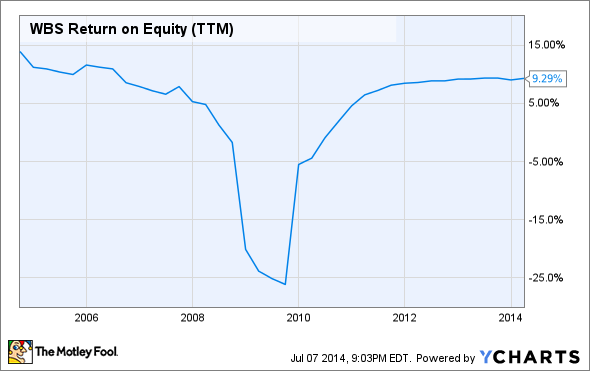 In summary, Webster relies very heavily on its lending business to generate revenues. The company produced slightly above average profit margins and spot on the average return on equity. In light of the company’s strong asset quality though, these profitability results are satisfactory. 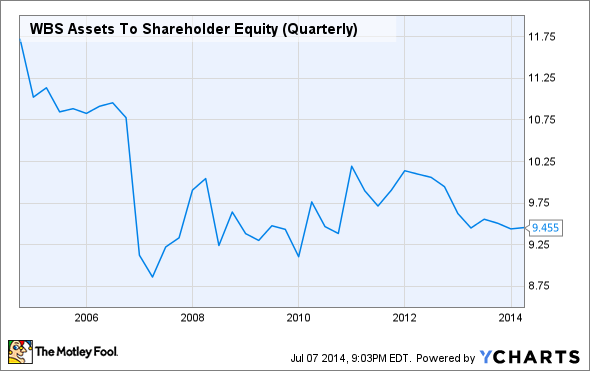 Webster Financial Corp.'s assets-to-equity ratio comes in at 9.5. The average of the 62 banks analyzed in this series of articles was 9.1.

Growth and valuation
Webster Financial Corp. saw its revenues change by 1.4% over the past 12 months. That compares with the 5.7% average of the 62 banks analyzed.

This change in revenue corresponded with a 6.2% rise in net income over the same period. The peer set averaged 14.1%.

Moving now to valuation, Webster Financial Corp. traded at a forward price-to-earnings ratio of 14.8, according to data form Capital IQ. That compares with the peer set average of 16.7.

Webster Financial Corp.'s market cap is, at the time of this writing, 1.8 times its tangible book value. The peer set average was 1.9.

Many investors use a general rule of thumb of buying a bank stock when the price-to-tangible book value is less than 0.5 and sell when it rises above 2. For me, that method is just way too oversimplified.

The company’s valuation metrics are about average compared to the larger peer group, which is likely driven by the company’s near average profitability, return on equity, and below average growth. For me though, the company’s asset quality is being underappreciated by the market.Based on the factors we’ve discussed here – soundness, profitability, and growth – Webster Financial seems like a bargain.

The single most important factor for long term banking success is making high quality loans. Do that while making a profit and growing, and a bank has a pretty good chance for long term success.