Samsung (NASDAQOTH: SSNLF) is still in the loop for now, as TSMC's production will merely be supplementing the South Korean conglomerate in supplying Apple with chips. One reason it's taken so long to add another supplier is that Apple and Samsung have collaborated for years on advanced manufacturing technologies. That's why Apple couldn't just shift its foundry business at the drop of a hat.

The evidence is piling up
Make no mistake: This is very likely just the beginning. Over the years, Apple has already shifted other component purchases away from Samsung wherever possible. To date, this has mostly been for fairly commoditized ingredients like memory and displays. But the processor is easily one of the most critical components. Apple is expected to continue this shift and to expand its relationship with TSMC in the years to come.

TSMC has begun mass production of A-chips on its 20-nanometer node. Samsung manufactures the current A7 on a 28-nanometer process. Further down the road, Apple and TSMC are already working together on 16-nanometer chips, according to the report.

Apple is expected to comprise about 10% of TSMC's revenue this year. The reported timing also lines up well with a boost in TSMC's monthly revenues. TSMC enjoyed a notable bump in sales in the second quarter. 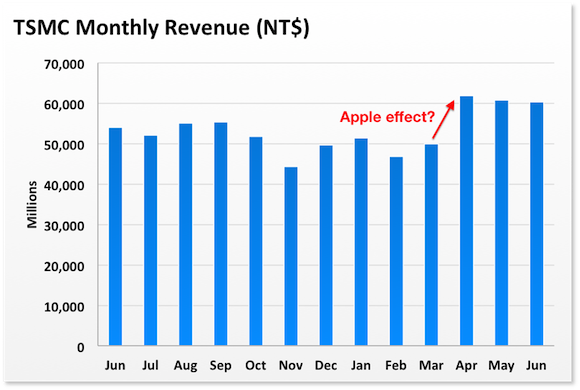 This is a huge win for TSMC, and one that it's likely worked on for years. Apple's foundry business has been estimated at $5 billion to $6 billion per year. Samsung's semiconductor segment generated nearly $37 billion in revenue last year. Losing a piece of Apple's business isn't fatal by any means, but it will definitely hurt.

On the other hand, TSMC generated just under $20 billion in revenue last year, so it will gladly welcome those checks from Cupertino. That's especially true since TSMC expects to spend between $9.5 billion and $10 billion on capital expenditures this year.

What about Intel?
Intel (NASDAQ:INTC) has also been vying for Apple's foundry business, and there's no mention of the chip giant in the report. Intel does have a technological lead over TSMC, but it also makes some strategic sense for Apple to prefer working with a pure foundry as opposed to a vertically integrated chipmaker that is entertaining a foundry business.

To some extent, Apple competes with Intel as Intel continues to try to grow its presence in mobile chips. Furthermore, there is still the possibility that Apple will eventually ditch Intel chips for A-chips in Macs once the performance delta narrows.

That's not to say that Intel is completely out of the running. Earlier this year, IC Insights speculated that Intel could cut a deal with Apple to get its Fab 42 up and running. Intel had delayed the Arizona facility's opening since it didn't need the capacity. Farther out, it's still possible that Apple could partner with Intel for even more advanced manufacturing processes.

For now, Apple can continue delivering incremental blows to Samsung, just at a time when Samsung's smartphone and related component businesses are suffering.