Please ensure Javascript is enabled for purposes of website accessibility
Free Article Join Over 1 Million Premium Members And Get More In-Depth Stock Guidance and Research
By Jay Jenkins - Jul 10, 2014 at 10:37AM

What do bad loans, high leverage, and a sky-high valuation have in common? Unfortunately for investors, they all describe Toronto-Dominion Bank.

Today, we'll look at Toronto-Dominion Bank ( TD -0.94% ), an $832.4 billion bank headquartered -- not surprisingly -- in Toronto and commonly referred to as TD Bank. You can find information on other banks at my Motley Fool article feed, available here. All data in this analysis was sourced from the FDIC's Quarterly Banking Profile and S&P Capital IQ.

TD Bank reserved $364.0 million for the first quarter, which represented 5.3% of operating revenue. That compares with 5% for the $10 billion-plus peer group, according to the FDIC.

The first question, perhaps most obviously, is whether the bank actually generates a profit at all. According to data from the FDIC, 7.3% of U.S. banks failed to generate a profit at all in the first quarter. That's one in every 14 banks! 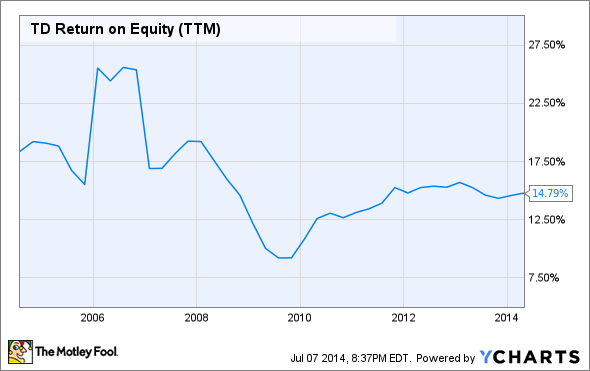 For TD Bank, the first calendar quarter of 2014 wasn't that bad. The company generated total net revenues of $6.9 billion for the quarter -- that is total interest income plus non-interest income minus interest expense.

Over the past 12 months, The Toronto-Dominion Bank has generated $25.5 billion in total net revenue. Of that revenue, 59% was attributable to net interest income, the difference between interest earned on loans and paid out to depositors. The remaining 41% was through fees, trading, or other non-interest revenue sources.

The bank was able to turn a profit margin of 26% on that revenue, slightly higher than average for large North American banks.

Clearly, TD Bank is doing something right on the profitability front. The company is churning out margins and returns better than its peers.

Circling back for a moment to the bank's soundness profile, it's comforting to know that the bank does have the income-generating engine to increase reserves as needed without denting the income statement in any noticeable fashion. But profit margins can be erased almost instantly by bad loans; this comfort is at best a mitigation and by no means a solution.

Ban's use all kinds of esoteric and overly complex accounting methods to determine leverage. We'll keep it simple here with an old-fashioned assets-to-equity ratio. The lower the number, the less levered (and more conservative) the bank.

TD Bank's assets-to-equity ratio comes in at 16.7. The average of the 62 banks analyzed in this series of articles was 9.1. 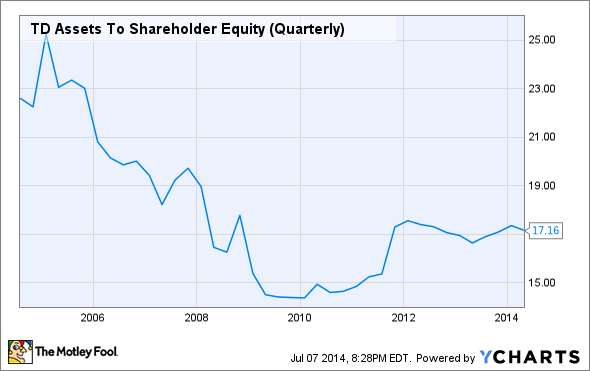 I hope that number stopped you in your tracks. It certainly made me look twice.

At this point, the bank's impressive ROE figure suddenly doesn't look so impressive. To be fair, a bank with 17 or so times leverage in 2005 wouldn't have been shocking at all. However, serious lessons were learned in the financial crisis about the risks of leverage -- risks that TD Bank is apparently willing to take, even with well above peer average non-performing assets.

Growth and valuation
Toronto-Dominion Bank saw its revenues change by 7% over the past 12 months. That compares with the 5.7% average of the 62 banks analyzed.

This change in revenue corresponded with a 6% in net income over the same period. The peer set averaged 14.1%. 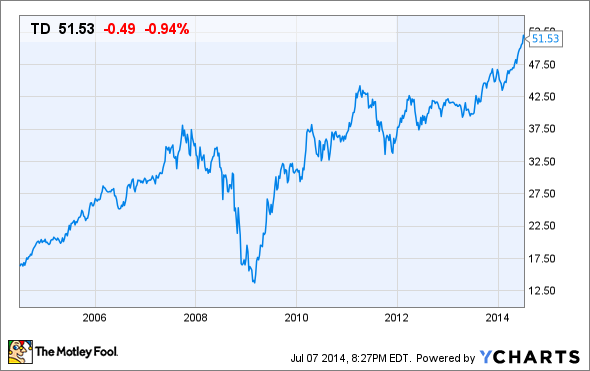 Moving now to valuation, TD Bank traded at a forward price-to-earnings ratio of 12.4, according to data form Capital IQ. That compares with the peer set average of 16.7.

Toronto-Dominion Bank's market cap is, at the time of this writing, 3 times its tangible book value. The peer set average was 1.9.

Based on the factors we've discussed here -- soundness, profitability, and growth -- I see TD Bank as being overvalued.

The bank has eyebrow-raising leverage and an asset base of questionable credit quality. The bank's impressive earnings and return on equity don't come close to justifying the bank's price-to-tangible book valuation of 3.

There's a Problem With This Bank's 15% Return on Equity

1 Foreign Bank Worth a Closer Look
Is This the End for This Bank's 4.1% Dividend?

4 Bank Stocks That May Be Overvalued