The oil king possesses large quantities of natural gas and has partnered with international firms to help develop its difficult-to-exploit reserves.

This month, Royal Dutch Shell ( RDS.B 0.41% ) withdrew its investment from Saudi Arabia's Kidan project, which was a joint venture between Royal Dutch Shell and Saudi Aramco. The Saudi government granted the two companies approval to conduct an assessment of the Kidan area in 2011. The area is located in Saudi Arabia's Rub' al-Khali, or Empty Quarter, the largest sand desert in the world.

Source: energy365 [the Kidan fields are located in the bottom right corner]

Why natural gas matters for Saudi Arabia
Saudi Arabia is experiencing high population growth and increasing demand for energy. Energy is heavily subsidized in the country where subsidies equaled about 20% of GDP in 2011. This creates a problem because using oil for domestic electricity generation and gasoline means the government is exporting less and not maximizing revenue from high oil prices. It would also lead to the oil superpower's strength as an OPEC swing producer being compromised and social services taking a hit. For the Saudi government, this poses geopolitical and domestic security risks; the social services made possible from the oil wealth play a key role in keeping a lid on domestic opposition to the government.

This is where natural gas comes in, particularly for electricity generation. Saudi Arabia boasts proven natural gas reserves of 288 trillion cubic feet, giving it the fifth-largest natural gas reserves in the world after Russia, Iran, Qatar, and the United States. At least 57% of these reserves are associated petroleum gas. The remainder, however, largely requires new investment and infrastructure to be extracted and brought to market. Saudi Aramco holds that only 15% of the country has been sufficiently surveyed for natural gas deposits, which means there may be much more.

It is clear why developing the country's natural gas reserves is a top priority for the Saudi government. All production is directed toward domestic use, with no gas imported or exported. Rising demand must be met with rising production. To this end, Saudi Aramco participates in three joint ventures with international energy firms.

Three efforts to develop natural gas reserves
1. South Rub' al-Khali Company (SRAK)
SRAK is the company formed by the partnership between Saudi Aramco and Royal Dutch Shell referred to earlier. While Royal Dutch Shell is ending investment in the Kidan project, it remains a partner in SRAK, whose awarded area is 210,000 square kilometers with a 25-year production period. If production efforts prove to be fruitful, Royal Dutch Shell stands to benefit nicely from booming demand in the Kingdom moving forward. However, developing these fields is extremely capital intensive. Kidan was expected to be a $8 billion project, with two $4 billion phases. 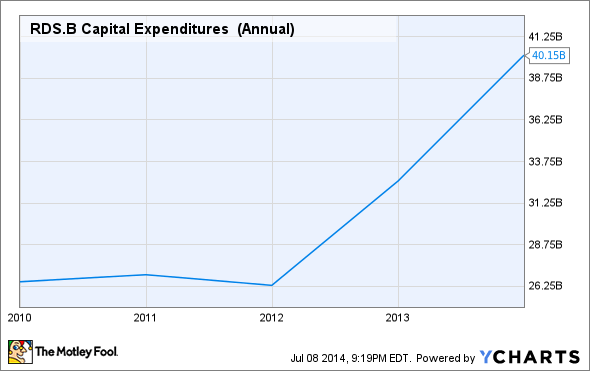 Capital expenditures would presumably be split equally between the 50/50 partners in SRAK. For Royal Dutch Shell, $4 billion for the project would represent a 10% or greater slice of its annual capex. This would have been quite significant for a company not focused on Saudi Arabia. However, integrated gas is is a growth priority for the company, and Saudi Arabia's large reserves and growing demand make it an attractive opportunity. Royal Dutch Shell's growth priorities may lead to Saudi Arabia becoming a major play for the company.

2. Luksar Energy
Luksar Energy is a joint venture with Russian oil and gas giant Lukoil ( LUKOY -1.41% ). Lukoil is an 80% stakeholder in the venture. The two partners explore a 30,000 square kilometer area in the Rub' al-Khali. Lukoil invested $500 million on exploration and appraisal of the area. The company considers the Middle East a "strategic region of development" as it continues to prioritize international expansion to drive growth. Drilling will begin in early 2015.

3. Sino Saudi Gas
Saudi Aramco also entered a joint venture with Chinese energy firm Sinopec ( SNP 0.53% ) to explore a 40,000 square kilometer area in Rub' al-Khali. Sinopec holds 80% of Sino Saudi Gas. The start of production would be especially significant for Sinopec because it would be the company's first gas-producing project outside of China. For Sinopec -- recently ranked #3 on the Fortune Global 500 list, after Wal-Mart and Royal Dutch Shell -- success on this Arabian project will increase revenue and strengthen its international presence.

Foolish conclusion
Saudi Arabia possesses great quantities of natural gas that have not been fully taken advantage of thus far. This needs to change if the Saudi state hopes to protect its geopolitical power and the socioeconomic stability of the country. Royal Dutch Shell, Lukoil, and Sinopec have great opportunities in front of them to benefit from high demand in Saudi Arabia; they are best-positioned to gain from successful extraction.

However, the technical difficulties of extracting much of the natural gas are considerable, as are the costs and uncertainty of where the gas can be recovered. These three factors have been enough to drive Eni, Repsol, and Total out of the search for commercially viable natural gas deposits in the Empty Quarter in the past. Despite Saudi Arabia's natural gas riches, the oil king isn't natural gas royalty just yet.