Editor's Note: An earlier version of this article had the wrong date for the Sapien XT's Japanese approval; the date below (June 2013) is correct. The Fool regrets the error.

Edwards Lifesciences's (NYSE:EW) stock has endured quite the roller coaster over the past two years.

In that time, shares of Edwards have fallen by more than 13% as concerns over the company's sales of its Sapien heart valves have swirled. But 2014 has been miraculous: Not only has Edwards jumped by more than 33% year-to-date, but this stock also has outperformed many of its peers in the cardiac device industry. 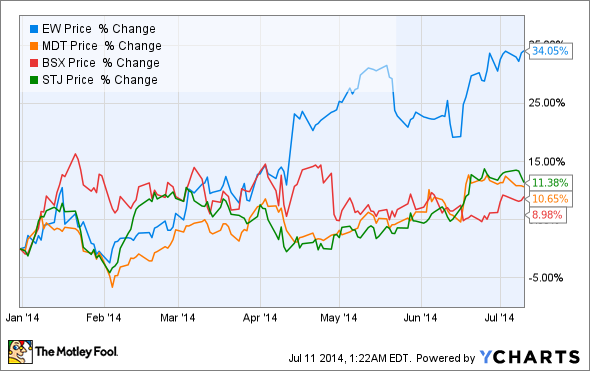 It's a remarkable rise that has rewarded investors for their patience. But can Edwards's stock keep up its run through the rest of 2014 and beyond? While this company has hit paydirt this year, challenges loom on the road ahead.

Approvals spark Edwards' run
Edwards certainly has had its share of hits this year. Perhaps no victory underscores the medical device maker's 2014 like its Sapien XT transcatheter aortic heart valve winning FDA approval in June. The stock jumped after that approval, and with the XT coming in multiple sizes, analysts believe that Edwards will be in a better position to square off with rival Medtronic (NYSE:MDT) following the latter's approval of its competing CoreValve. While the XT's currently approved for high-risks patients, Medtronic's device likewise won approval for patients less suitable for surgery to treat cardiac problems.

Analysts are optimistic. After the XT's and CoreValve's approval, Leerink Swann projected that the transcatheter aortic heart valve market could jump by nearly 20% through the end of 2014.

Edwards has made the most of the market's growth, even as the company's monopoly in the U.S. has ended with the arrival of Medtronic's CoreValve. The med tech innovator posted double-digit sales growth in its transcatheter heart valve business in its first quarter, and has made strong inroads overseas lately. International growth has been a key point of the company's climb in 2014. The Sapien XT earned Japanese regulatory approval last June, and the device earned CE Mark approval in Europe for valve-in-valve procedures earlier this year, expanding its reach across the Atlantic after first winning CE Mark approval back in 2010.

Optimism over the Sapien this year has pushed this stock higher and higher, particularly as investors jumped aboard the bandwagon after the stock's fall before 2014. Edwards has built around its star product by bolstering other areas of its business, including gaining FDA approval for its ClearSight blood circulation monitor in late June, but make no mistake: The transcatheter heart valve market is the big key to this company's -- and stock's -- growth, far outpacing its surgical heart valve therapy and Critical Care businesses in revenue growth in the first quarter.

Challenges ahead, at home and abroad
Unfortunately, rising competition at home and abroad, along with Edwards's ongoing financial troubles, mean that this stock may struggle to keep up its pace through the second half of the year.

While Edwards may have won some serious cash when it and Medtronic settled their ongoing patent dispute over the CoreValve in May, it also opened the door for its larger rival to push into the U.S. without the threat of court action hanging over its head. For its sake, Edwards will receive royalties from Medtronic of at least $40 million each year through 2022, a payment that Goldman Sachs estimated could add as much as 36 cents to earnings per share in 2014.

The company may need that boost. Leerink Swann estimates that Medtronic's jump into the U.S. could push Edwards' domestic market share down to 65% by the end of the year. While that's still a dominant majority, it's a clear sign that Edwards will need to step up sales growth in order to ward off its chief competitor at home.

The device maker saw overall U.S. sales fall by more than 2% in the first quarter, and without ongoing growth, Edwards could be in trouble in the long run. Edwards's earnings are still under fire, with adjusted EPS declining by more than 54% year-over-year in Q1, making growth all the more pivotal for Edwards's big picture.

The situation abroad looks even murkier. While the company's captured international growth, Medtronic's not the only competitor looking to push into the transcatheter heart valve market in Europe. Boston Scientific (NYSE:BSX) scored CE Mark approval for its Lotus valve late last year, and while it will take some time for sales to get going, the company's also aiming to kick off trials for the Lotus in the U.S. later in 2014. Boston Scientific's a longer-term threat to Edwards, but while the Lotus won't catch up to the Sapien or the CoreValve just yet, it's worth keeping an eye on.

Rivals closing in
Edwards Lifesciences undoubtedly has made progress in 2014. The company's approvals in Japan, the U.S., and Europe for the Sapien XT valve bode well for the future, and for Edwards's leadership in the transcatheter aortic valve market. However, with Medtronic encroaching on the company's turf at home and Boston Scientific and other rivals crowding the market in Europe, the gulf between Edwards and hard-charging competitors could be closing. This company's still struggling to keep sales and earnings headed in the right direction, and if Edwards can't make the most of its dominance in the transcathether valve market, this stock will be hard-pressed to keep up its gains in the year so far.

Will Edwards Lifesciences Stock Slip in the Second Half of 2014? @themotleyfool #stocks $EW $MDT $BSX Next Article
Current