The minimum wage battle is heating up again and the outcome will have important consequences for shareholders of Costco Wholesale (NASDAQ:COST) and Wal-Mart Stores (NYSE:WMT). In February, President Obama issued an executive order to raise federal contractor pay to at least $10.10 an hour, and many are calling for a similar rise in the federal minimum wage. Although it is unlikely that a minimum wage hike will pass the US Congress any time soon, states and municipalities could take action independent of the federal government. Even if wages do not rise, investors should understand why Costco can absorb wage hikes much more easily than Wal-Mart -- and what this means for each company as the 21st century gets under way.

If Costco can, why not Wal-Mart?
Advocates of a higher minimum wage have long used Costco as a model for other retailers. In 2013, Costco reported that it pays a starting hourly wage of $11.50 and hourly workers earn an average of $20.89 per hour. Wal-Mart's full-time hourly employees average just $12.91 an hour -- above the federal minimum, but well short of Costco's wages. Public documents do not reveal what percentages of the companies' respective workforces are paid minimum wage, but average wage statistics suggest that Wal-Mart pays many more employees close to minimum wage than Costco does. 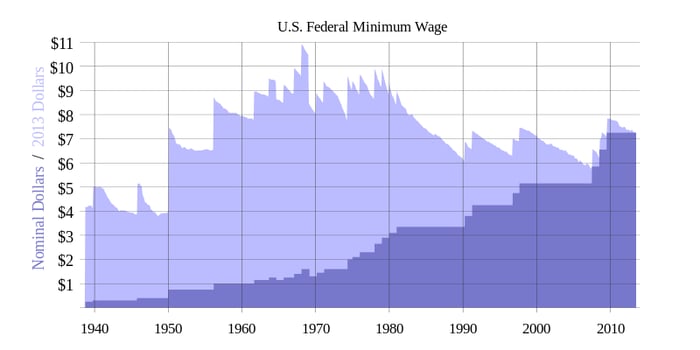 The current federal minimum wage is $7.25 per hour. Data sources: Department of Labor, Bureau of Labor Statistics. Image from Wikipedia.

If Costco can afford to pay $20.89 per hour, Wal-Mart can probably afford to pay its employees more than $12.67 per hour. However, Wal-Mart shareholders should be concerned if wages increase significantly. In addition to the fact that Costco already pays its employees substantially more than the minimum on average, wage hikes would affect Costco less than Wal-Mart for three more reasons.

Costco pays its workers higher wages, but maximizes employee productivity so it employs fewer workers. Costco earned $3 billion from operations in 2013 and employed 184,000 full- and part-time employees at the end of the year. This means it generated $16,300 in profit per employee. By comparison, Wal-Mart employs 1.4 million US workers and generated $20 billion in operating income in the US. That's $14,300 in operating profit per employee, or $2,000 less than Costco even though it pays 60% of what Costco pays in hourly wage rate on average.

Costco's workers are more productive because of how the company manages inventory. The typical Costco warehouse stocks just 3,700 SKUs, or stock-keeping units, while Wal-Mart Supercenters stock over 140,000 SKUs. This makes it simpler for Costco to restock inventory, direct customers to the proper aisles, and focus its purchasing power on a narrower range of products. As a result, Costco's stores are less labor-intensive than those of Wal-Mart.

In addition, Wal-Mart cannot streamline its model to become more like Costco. Costco's customers do not expect to do all of their shopping at Costco; they can supplement their Costco shopping with trips to other stores. On the other hand, Wal-Mart shoppers expect to fill all of their shopping needs at Wal-Mart. In 2011, Wal-Mart had to bring back 8,500 SKUs to recover from a dip in sales. It's clear that Wal-Mart cannot simply reduce inventory and minimize labor -- it needs to carry a wide range of products at low prices. This will always require more labor than running discount warehouse stores.

Customer demographics
Sol Price, founder of Price Club, which merged with Costco in 1993, once said, "the richer people are, the more they like to save." Costco's customer base really likes to save. Members pay anything from $55 to $110 per year to gain access to thousands of products sold at rock-bottom prices. Costco's prices are so low that its gross margin on inventory is less than half of that of Wal-Mart; last year, Costco's gross margin was 10.6% and Wal-Mart's was 24.3%.

Customer demographics play an important a role in Costco's ability to pay higher wages. Costco's model depends on consumers who are able to pay for memberships in advance of the savings that accrue throughout the year -- and for a store that may not provide for all of one's needs. This strategy targets more affluent households than Wal-Mart, which appeals to a lower-income demographic. Costco does not need to make a large profit on the goods it sells because it derives an 100% gross profit from membership revenue, which allows it to pay high wages to a relatively small labor force that provides excellent customer service. This gives its stores a natural advantage via financially secure consumers -- something that Wal-Mart can never hope to match.

Profitability is already equal
Costco is often held up as a model of corporate responsibility for all stakeholders; some say that Costco forgoes higher profits in order to provide better wages to employees. Indeed, Costco's 2013 operating profit margin was just 2.9%, about half that of Wal-Mart. Wal-Mart could give each of its 1.4 million US employees a $9,000 raise and still have a higher operating margin than Costco. For some, this is a sign that Wal-Mart has plenty of room to raise wage rates and still remain competitive.

However, Foolish investors know there's more than one way to calculate profitability -- and profit margin may not be the best one. We already know that Wal-Mart earns less per employee than Costco, but there's another measure that shows that the world's largest retailer may not be able to sustain large increases in wage rates: return on invested capital.

By this measure, Wal-Mart and Costco are equally profitable even though Costco pays much higher wages. This highlights the difference between the two companies' business models, which enables Costco to employ enthusiastic hourly workers by offering better pay and still generating an acceptable return on investment. Wal-Mart's model is not designed to pay higher wages. Thus, shareholders will suffer if wages rise.

Foolish takeaway
Wal-Mart and Costco can both absorb higher pay rates if legislation or pressure from outside groups compels them to do so. However, Costco's labor-efficient model puts the company in a much better position than Wal-Mart for complying with higher wages. Wal-Mart generates less profit per employee, caters to a lower-income demographic, and generates about the same return on invested capital as Costco.

Even if wage rates do not rise in the near term, investors should be concerned about Wal-Mart's long-term profitability. A labor-intensive, bricks-and-mortar general retailer seems destined for mediocre profitability as the 21st century progresses. On the other hand, a labor-efficient retailer that focuses on a narrow range of high-value SKUs could be the model for physical retail of the new century. There may always be a need for a general merchandise retailer, but that doesn't mean it will be as profitable as time progresses. Make your investments accordingly.