Please ensure Javascript is enabled for purposes of website accessibility
Free Article Join Over 1 Million Premium Members And Get More In-Depth Stock Guidance and Research
By Adam Levine-Weinberg - Jul 13, 2014 at 9:06AM

Warren Buffett loves earnings growth -- as long as a company doesn't have to reinvest all of its earnings just to eke out marginal gains in net income.

"... [I]n industries with low capital requirements, or if management has a record of plowing capital into projects of low profitability; then earnings should be paid out or used to repurchase shares— often by far the most attractive option for capital utilization. -- Warren Buffett, 1978 Berkshire Hathaway letter to shareholders

Most investors are obsessed with earnings growth, and for good reason. As a company's profit increases, its share price usually follows, as investors can typically expect higher dividends or share buybacks from a company with higher earnings.

Dillard's has returned over $1 billion to shareholders in the last few years rather than trying to grow (Photo: Wikimedia Commons)

However, legendary investor and Berkshire Hathaway ( BRK.A -0.45% ) ( BRK.B -0.59% ) chairman Warren Buffett has urged investors to abandon their single-minded focus on earnings growth. Sometimes, a company is better off not pursuing earnings growth, but instead returning cash to shareholders. In the last few years, department store operator Dillard's ( DDS -8.04% ) has proven the value of this approach.

Growth vs. capital return
At a basic level, Warren Buffett's point is that a company has two choices for what to do with its earnings. On the one hand, it can reinvest the earnings in its business by pursuing organic growth projects or making acquisitions. On the other hand, it can return the money to shareholders through dividends or share repurchases.

Reinvesting capital can often allow a company to grow its net income. That does not necessarily make it a good idea. After all, if the company paid out all of its earnings in dividends, each investor could "reinvest" the money individually.

What really matters is how the internal rate of return (IRR) of any growth project compares to the company's cost of capital. If a project will provide a 5% annualized return but the cost of capital is 8%, then the project should be canceled -- even though it might increase earnings from an accounting perspective.

Suppose I own a company that generates $10/share in earnings. The company can either reinvest the $10/share in growth projects that will add $0.50 in annual EPS. Alternatively, it can return the $10/share to shareholders through repurchases or dividends. (Obviously, it could also do a combination of the two.)

If I have other investment opportunities that will earn $0.70 or $0.80 on a $10 investment, I would be better off getting the dividend and investing it in one of those other stocks. In other words, a big dividend and no earnings growth is often better than earnings growth with no dividend. If a company's stock is undervalued, share buybacks may be an even better way to return cash to shareholders than dividends.

The answer, of course, is no! Buffett hasn't returned very much capital to investors because he has consistently found investment projects that offered a higher return than investors could achieve elsewhere. (Just think: would you prefer to manage your investments yourself, or have them managed by Warren Buffett?) It's hard to argue with the results. 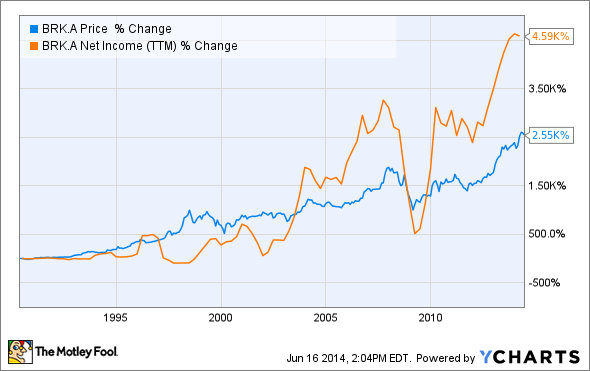 As the chart shows, Berkshire Hathaway's net income has grown nearly fifty-fold just since the late 1980s, and the stock has appreciated more than 2,500%. Very few investors can boast a better record than that. Whereas many companies reinvest capital to grow earnings without creating value, Warren Buffett has clearly created a ton of value for Berkshire Hathaway shareholders over the years.

Dillard's: disinvesting to return capital
Department store chain Dillard's is a polar opposite to Berkshire Hathaway. Whereas Warren Buffett has meticulously reinvested the vast majority of Berkshire's earnings, the management team at Dillard's has been "disinvesting" in its business in recent years, in favor of returning capital to shareholders through buybacks and (to a lesser extent) dividends.

For the last several years, Dillard's has averaged more than $300 million in annual share repurchases. It has spent just as much money on buybacks as it has earned during that time period, while also paying nearly $300 million in dividends since 2010. 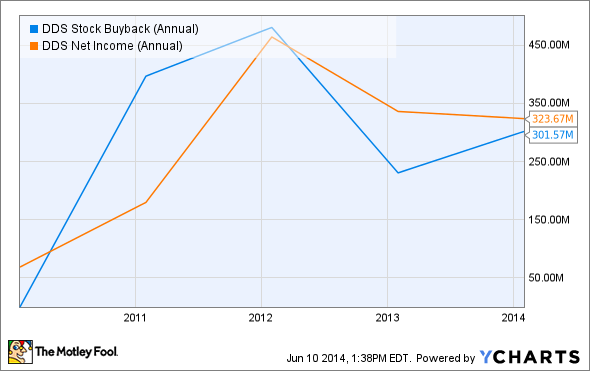 Dillard's has done this by closing numerous stores, minimizing investment in its remaining stores, and opening very few new locations. Dillard's depreciation and amortization expense -- which reflects the annualized cost of past investments -- is currently $255 million/year.

By contrast, it spent just $95 million on CapEx (i.e. new investments) last year, and plans to spend $150 million this year. In other words, Dillard's is investing less than the amount it would theoretically need to maintain its current business. Meanwhile, it has closed almost 10% of its full-line stores in the last 5 years.

However, considering the relatively uninspiring long-term potential of mall-based department stores and the cheap valuation of Dillard's stock, prioritizing share buybacks over organic growth was a smart decision. Dillard's has reduced its share count by about 40% since 2010, causing EPS growth to outpace net income growth. 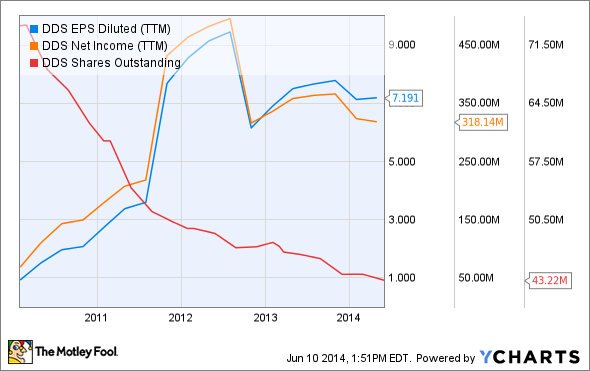 It all depends on context
Berkshire Hathaway has historically reinvested almost all of its earnings, while Dillard's has recently been returning all of its earnings to shareholders. Despite taking diametrically opposed paths, Warren Buffett would argue that both companies made the right strategic decisions.

At Berkshire Hathaway, Buffett has found plenty of places to invest capital and earn better returns than could be found elsewhere in the market. Dillard's hasn't had many good investment opportunities, so it has instead returned all of its earnings (and more) to shareholders. In each case, the result has been market-busting stock gains.