Wind turbines are increasingly being used to provide electricity, but they aren't reliable enough to replace older, dirtier fuels.

When discussing electricity, the words "carbon dioxide" invariably come into play. The utility industry's use of carbon based fuels is responsible for roughly 40% of the generation of this greenhouse gas domestically. Alternative power options are often held up as the solution to this problem. But wind turbines are a great example of why this isn't true—and these two graphs show why.

Getting into wind
Xcel Energy ( XEL 0.20% ) has made a big commitment to wind power. This mid-western utility got just 3% of its power from wind in 2005, which happens to be the backdated starting date for CO2 emission regulations being proposed by the Environmental Protection Agency (EPA). By 2020, however, wind is projected to make up 22% of the company's generation.

That's a huge increase, with coal taking most of the hit. However, even after the rapid wind power growth coal will still account for 43% of Xcel Energy's power pie. Natural gas, which is cleaner than coal but still emits carbon dioxide, and nuclear power will throw in another 30%. And the Texas experience with wind power shows why: 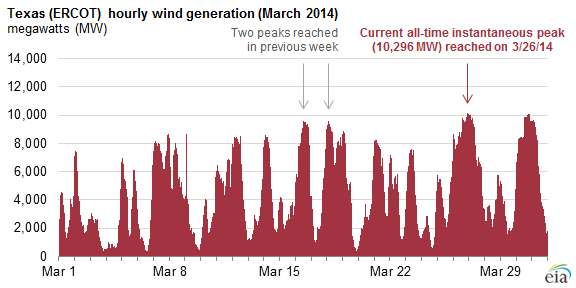 According to the Energy Information Administration (EIA), "At 8:48 p.m. on March 26, wind generation on the electric grid covering most of the state of Texas reached a new instantaneous peak output of 10,296 megawatts (MW). At that moment, wind supplied almost 29% of total electricity load." While that's impressive, note the use of the word "instantaneous" as you look at the graph above.

The power generated by wind turbines is anything but constant. It juts up and down with often severe moves. For example, before and after hitting that peak, wind turbines in Texas were only producing around 2,000 MW of power. It's not because someone in Texas turned the turbines off, it's because the wind stopped blowing. That's why Xcel Energy isn't giving up on the base-load trio of coal, gas, and nuclear.

I have the power!
This trio is controlled by the utility and can be run as hard as needed. Nuclear, for example, is usually run between 80% and 100% of capacity. Coal and natural gas tend to run at lower levels, but could easily be pushed higher if needed. The important thing is that how hard these power sources are worked is within the control of the utility.

In fact, the next graphic shows how important the interplay between nature-controlled wind and man-controlled power is. Look at the lines for wind and coal. When wind is up, coal is down. And when wind is down, coal is up. The same dynamic is true for natural gas.

This isn't a fluke -- it's because utilities like Excel need to have a reliable power source to offset the peaks and valleys of an inherently unreliable fuel source. It's the same reason why Southern Company ( SO 0.43% ) is building 1.5 gigawatts of nuclear and coal plants right now. It wants to maintain its flexibility.

For example, in 2020, the company expects to have the option to generate as much as 50% of its power from coal or gas, whichever is cheaper. Nuclear, meanwhile, is expected to run at a steady state of around 18%. Renewables? Well, they are just small slice of the pie at 8% of total capacity in 2020.

Note, however, that renewable sources provided 4% of Southern Company's power last year, despite coming in at 6% of the utility's total capacity. And the 4% is elevated by the fact that hydro, which tends to run at high capacity rates, is a big part of the mix. Despite investing in solar and wind, Southern Company isn't willing to give up the control offered by natural gas, coal, and nuclear power plants.

Good and bad
Renewable power like wind turbines is a wonderful thing. However, it isn't an answer to the CO2 problem. The generation profiles of Xcel energy and Southern Company prove this out. Expect the wind to become an increasingly important utility player, but don't expect it to kill coal, gas, or nuclear anytime soon.

Why ESS Tech Stock Slumped More Than 11% in November