There was a day when Tesla was a small player in the charging infrastructure world. But those days are long, long gone.

While political entities and manufacturers debate about a common and compatible charging platform, electric-car maker Tesla Motors ( TSLA -0.53% ) is continuing to expand its charging network, already known for being the world's largest fast-charging network and the fastest growing. From North America to Asia, Tesla is expanding one country at a time. The latest country to see meaningful electrification? France. 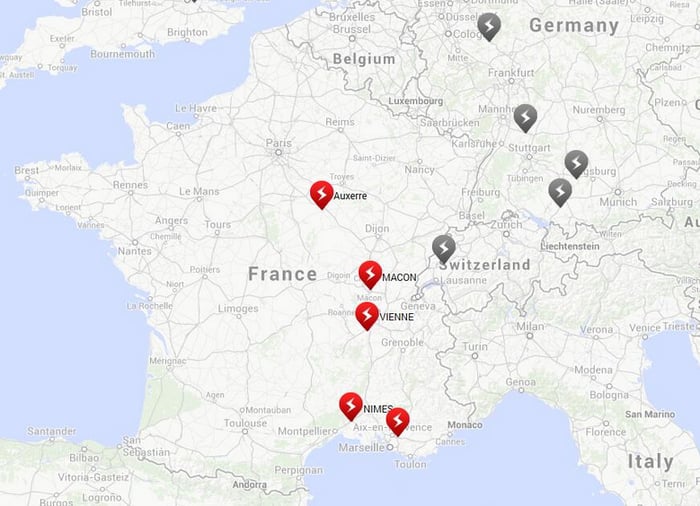 The rapid European expansion
Tesla tweeted on Sunday that "France is now charged," saying that Model S owners can now use Tesla's Superchargers to travel free from Paris to the Cote d'Azure.

Tesla's European Supercharger network has grown rapidly in the past two weeks, with Tesla growing the network from 24 less than two weeks ago to 37 today. 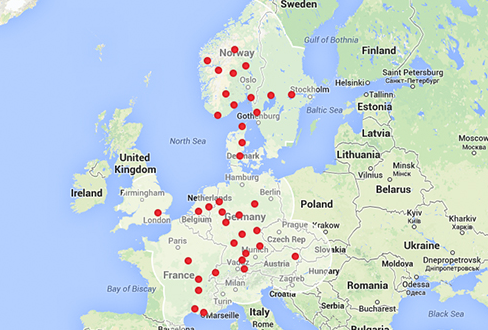 By the end of this year, Tesla has said that it plans for 100% of the population of Germany, the Netherlands, Switzerland, Belgium, Austria, Denmark, and Luxembourg to live within a 320 kilometers of a Supercharger station. Tesla also expects 90% of the population of England, Wales, and Sweden to live within the same distance of a Supercharger station in the same time period.

ALL IN
These are only two words in all capital letters in Tesla's list of principles for the Tesla Culture. Those words come in the last and final tenet, which reads, "We are ALL IN."

This notion certainly seems to hold true with the company's approach to expanding its network of charging stations. Consider for instance, CEO Elon Musk's instructions to the team overseeing Tesla's charging infrastructure in China: Spend as much money as possible on expanding the network without wasting it.

To illustrate just how fast Tesla is planning to rollout out its Supercharger network, consider this. On April 24, Tesla said it opened its 100th Supercharger station. By the end of this year, Tesla says its plan is to have 300 globally. And today, Tesla has 143 stations. So, in less than six months, Tesla plans to double the total number of charging stations.

The effect of such rapid growth in the network has been astounding. As Tesla CEO Elon Musk recently tweeted, long distance driving in the Model S is growing exponentially.

Musk has said he is open to sharing the network with other manufacturers under the condition that they build compatible vehicles and contribute their fair share of capital toward construction and maintenance. By the end of this year, Tesla's charging network looks poised to dwarf any other fast-charging solution. By that point, the most rational solution to creating a compatible charging network will be to tap into to the Supercharging party.

Tesla is on pace to have 80%of the U.S. population within range of the Supercharger network in 2014 and 98% of the population by the end of 2015. Superchargers can charge a Tesla Model S 16 times faster than most public charging statins, juicing the cars to a 50% charge in 20 minutes and an 80% charge in 40 minutes. Tesla has made the Supercharger stations free to Model S owners for life.