By focusing on high-margin liquids production, Devon Energy Corp (NYSE:DVN) has been able to consolidate around key positions with high returns while shedding low-growth, gas-weighted assets. Over the past five years Devon has underperformed the S&P 500, as low natural gas prices took a chunk out of its growth prospects -- but now that Devon is on the crude bandwagon, investors have plenty to look forward to.

Crude delivers strong free cash flow
As Devon Energy keeps shifting its production mix toward crude, it will be able to keep generating larger and larger streams of free cash flow. From the first quarter of 2013 to the first quarter of 2014, Devon Energy increased its U.S. oil production by 56% after factoring out asset sales, which resulted in its unhedged operating margin per barrel of oil equivalent, or BOE, jumping 54%. The more cash Devon is able to pocket per BOE the better, as it can deploy that money to keep growing production, buy back shares, or increase its 1.2% dividend yield.

In order to grow its margins and oil production by such large percentages, Devon Energy had to completely revamp its operations. To do so, Devon has been steadily divesting non-core assets, which generated $5 billion in cash that Devon was able to divert toward high-growth, liquids-rich plays. One great example of how Devon put that cash to work is its $6 billion acquisition of GeoSouthern Energy's Eagle Ford acreage.

Through that purchase, Devon gained 53,000 boe/d of oil-weighted production, 400 million BOE in reserves, and 1,200 possible drilling locations. By spending $1.1 billion developing the Eagle Ford this year, Devon is guiding for production to average 70,000 boe/d-80,000 boe/d in 2014, growing by a 25% compounded annual rate thereafter until peaking at 140,000 boe/d. As a cherry on top, Devon sees its Eagle Ford position generating $800 million in free cash flow next year.

Now that Devon Energy has shed its slow growth assets and is growing at a faster pace through smart investments, it may be able to fetch a higher valuation. Currently, Devon trades at a trailing 12-month P/E of 19.5, while other high-flying shale players trade above that. If Devon was to trade on par with its peers, it would see its stock price significantly increase as traders factor in its recent moves.

To justify a valuation expansion, Devon is expanding on the opposite side of North America by investing in Canada's oil sands through SAGD operations.

Steam assisted growth
Stream assisted gravity drainage, or SAGD, is a form of oil extraction used in Canada's oil sands. The way SAGD works is through two different wells that run side by side, working together toward a common goal. On top is the well that injects steam into the ground, which heats up the cold bitumen (a form of oil) and allows it to flow down into the production well underneath the steam well. 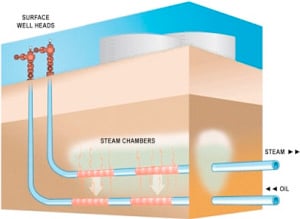 From there a diluent is added to the bitumen to keep it in liquid form so it can flow to a processing facility that will remove impurities. By using this technology, Devon Energy Corp has been able to complete two out of three Jackfish projects up in Canada.

Last quarter, Devon Energy reported that its Jackfish 1 and 2 projects were pumping out 9% more crude versus the same quarter last year. Jackfish 1 came online in December 2007 and is now outperforming its own peak capacity. Sometime in the third quarter of 2014, the third Jackfish project is going to be brought online. By bringing the third installment of this SAGD project online, net oil production from these three projects will grow from 47,000 bpd-52,000 bpd this year to 77,000 bpd-82,000 bpd by 2016.

It's important to note when these projects start up, as it takes a few years to reach peak production, but once they do strong free cash flow ensues. Free cash flow from the Jackfish projects is guided to grow from under $200 million this year to over $1 billion by 2016. That would be a huge catalyst for Devon and will allow it to invest in future free cash flow generating projects.

Foolish conclusion
By investing in oil plays, from Canada's oil sands to the Eagle Ford shale, Devon Energy has boosted its margins and substantially padded its free cash flow streams. As Devon keeps focusing on oil-weighted plays it will begin to see a valuation expansion as it trades more in line with its peers. On top of that, huge streams of free cash flow that can be used to increase its dividend, buy back shares, or purchase more oil production will help keep Devon's recent rally alive. Devon's stock price may have jumped ~26% this year, but that doesn't mean the rally has run out of steam just yet.