Dividends are hot right now, and for good reason. Not only do high-quality dividend stocks pay more than treasuries or savings accounts, but numerous studies show that higher yielding companies outperform over the long term. Dividend growth stocks do even better, as do less volatile stocks.

ConocoPhillips (NYSE:COP) is the largest independent oil and gas producer in the world and seems to offer dividend growth investors the trifecta of long-term returns. It's 16% less volatile than the stock market as a whole, yields 3.45%, double the industry average of 1.7%, and has grown its dividends by 8.24% over the last 19 years. 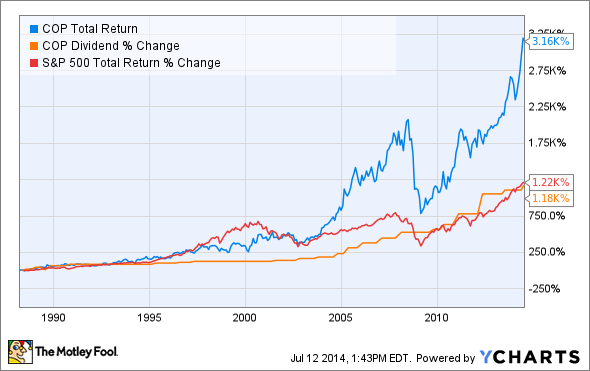 However, great size usually comes with a slowdown in growth. With smaller competitors such as Anadarko Petroleum Corporation (NYSE:APC) recently raising its dividend by 50% and Apache (NYSE:APA) refocusing on major US shale plays, is ConocoPhillips still the best oil producer for dividend growth investors?

ConocoPhillips: still king of the oil and gas hill

As this table illustrates, ConocoPhillips dominates Anadarko Petroleum and its average industry peer when it comes to margins. When it comes to operational efficiencies, not even highly profitable Apache can stand against it. I would bring to your attention ConocoPhillips' low cost of equity and how its returns on equity are three times as high. This is a stunning example of how ConocoPhillip's management is much better than Apache's and Anadarko's at growing shareholder value. As an added bonus ConocoPhillips trades at an incredible 57% discount to its industry peers, despite equally strong growth prospects.

When it comes to growth, whether it be of reserves, production, earnings, or dividends, ConocoPhillips surpasses Apache, Anadarko Petroleum, and its industry peers.

For example, in 2013 ConocoPhillips replaced 167% of its production, grew its cash margin by 11% and hiked its dividend by 4.5%. With its most recent 5.8% dividend increase, ConocoPhillips continues to prove its dividend growth chops, but the company is just getting warmed up.

Strong growth ahead
In 2012 and 2013 ConocoPhillips sold $12.4 billion in non-core assets and reinvested it into the Bakken and Eagle Ford shales, Permian Basin, and Alberta Tar Sands.

The results were spectacular:

During its first quarter ConocoPhillips reported even better output from its shale assets, with production from the Bakken and Eagle Ford up 41% year over year. Cash margins per barrel of oil equivalent rose 11% and cash from operations soared 37%.

Yet ConocoPhillips is still expecting annual production growth of 7%, 18%, 16%, and 21% from its Bakken, Eagle Ford, Permian and Tar sands assets through 2017.

All told, ConocoPhillips believes its shale and tar sands assets can grow its cash flows by 8% annually through 2017, which is likely to continue its dividend dominance over competitors such as Apache and Anadarko Petroleum.

What about the competition?
From 2006-2012 Anadarko Petroleum had a token dividend of $0.36 (0.3% yield). This year its tripled its dividend yet still yields just 1%, less than a third of ConocoPhillips. What's more, Anadarko isn't profitable, and its subpar dividend isn't covered by its free cash flows. This isn't to say that the dividend is threatened.

Anadarko Petroleum has $6 billion in cash, and production is expected to increase by 7%-9% this year, fueled by Anadarko's onshore US production growth of 12%. With 8 billion barrels of low-risk development opportunities, the company is likely to continue growing the dividend in the coming years. However, Anadarko Petroleum is unlikely to catch or outgrow ConocoPhillips' yield or dividend growth over the long term.

Apache has taken a page out of ConocoPhillips' play book and has sold off $9.4 billion in assets in the last 18 months in order to focus on domestic shale production, especially in the Permian Basin. Apache has another $1.8 billion in asset sales pending and has authorized a 30 million share buyback program -- 7.8% of outstanding shares. With onshore production up 21% this year, Apache is likely to continue raising its dividend in the short term (up 13% in 2012, 18% in 2013, and 25% this year). However, analysts are not expecting the long-term yield on Anadarko Petroleum and Apache to go above 1% and 1.5% respectively, through 2023.

Foolish bottom line
When it comes to independent oil and gas producers ConocoPhillips stands head and shoulders above competitors such as Apache and Anadarko Petroleum. Whether it's yield or growth in production, earnings or dividends, ConocoPhillips has its competitors beat. As an added bonus ConocoPhillips offers industry-leading profitability, operational efficiencies, and undervaluation. Long-term dividend investors can expect many years of market beating income and total returns from this master of oil and gas production.