After the market closed, People's United Financial (NASDAQ:PBCT) reported net income of $72.3 million, or $0.24 per share, in the second quarter of this year, an improvement of 25% over the $0.20 per share seen in the same period last year.The reason behind the increase in earnings resulted from the bank recognizing a gain of $13.4 million, or $0.04 per share, following the establishment of a joint venture with payment processor Vantiv (NYSE:WP), known as People's United Merchant Services, which was also announced today.

The newly established company will seek to leverage the existing relationships across the Northeast in an effort "to provide the next generation of payment solutions to businesses throughout the People's United Bank footprint."

The operating earnings at People's United Financial stood at $0.20 per share as it continued its remarkable consistent run, as shown in the chart below: 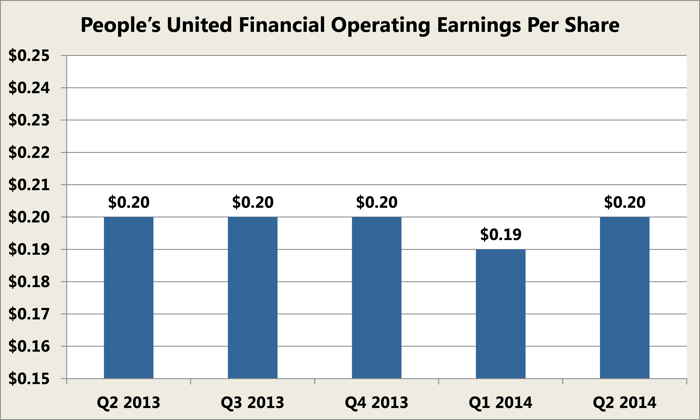 In the earnings announcement, President and CEO of People's United, Jack Barnes, said:

Our results this quarter demonstrate continued momentum in growing our businesses, fueled by ongoing strategic investments in people, products and services. This quarter we experienced annualized deposit growth of seven percent and loan growth of 13 percent, reflecting our strong commitment to fostering customer relationships. At the same time we continue to maintain superior asset quality metrics.

The new company will offer customers a comprehensive suite of payment solutions by combining People's United's strong reputation and broad access to commercial merchants with Vantiv's deep payments expertise, innovative products, security tools, technology and processing scale. This new partnership with Vantiv reflects our ongoing commitment to strengthen our products and services and should provide long-term growth for both companies.

In addition, People's United Financial reported it would officially be raising its dividend to an annualized rate of $0.66 -- or $0.165 per quarter -- a modest improvement over the previous $0.65 annualized dividend.