Under pressure from private equity investors to sell itself, pet supply specialist PetSmart (NASDAQ: PETM) is jumping through their hoops and is reportedly in talks with investment bankers to discuss strategic alternatives -- but perhaps also to initiate defensive strategies.

It was hedge fund Jana Partners that started barking for PetSmart to sell itself. With the pet supply company's stock underperforming the S&P 500 over the past year, the PE firm announced it had taken a 10% stake in PetSmart and wanted the company to explore a sale or other alternatives to enable shareholders to enjoy a significant return of capital.

Although initiating discussions following an activist investor's command is not uncommon -- there's a certain fiduciary responsibility on the part of the board of directors to at least begin considering the possibility -- the piling on by passive investor Longview Asset Management also urging a sale was seen as a significant development and helped bring the pet supplies company to heel. An activist investor typically takes a position in order to effect substantial change at a company; you know where they're coming from. A passive investor, on the other hand, is usually seen as supportive of management, so Longview, which owns 9% of PetSmart's stock, coming out in favor of a sale is a big deal.

Talking to investment bankers is a bigger step for the pet supplier to take than the review it initially began of ways to return more capital to shareholders, such as through increasing its dividend, repurchasing more of its stock, or even taking on more debt.

PetSmart currently pays a dividend of $0.78 per share that yields 1.4%, for a 22% payout ratio. According to data compiled by Bloomberg, that's significantly less than the average 35% payout offered by companies comprising the S&P 500. It further notes that PetSmart spent approximately $485 million buying back shares over the past 12-month period ending Feb. 2. Its last quarterly report showed it had around $300 million in cash, equivalents, and restricted cash on hand and little in the way of long-term obligations, other than the capital leases for its stores.

The pet retailer has been suffering from a slowdown in business that's affected retailers all across the landscape, but is also coping with competitive pressure from mass retailers like Wal-Mart and Target, both of whom have expanded their pet supply offerings, and from Amazon and its Wag.com website. While revenues were up 1.1% last quarter, same-store sales inched lower 0.6%, with comparable transactions decreasing 2.2%.

Even so, PetSmart has been recording multiyear double-digit increases in earnings per share and last year generated more than $468 million in free cash flow. That's lower than the half-million dollars or so it generated the year before, but that had more to do with compensation-related matters than any failings in the business.

Pet supplies remains a growth industry. According to the American Pet Products Association, more than-two thirds of U.S. households own a pet, with dogs remaining the top choice at 57% and cats coming in second at 45% (fish are a distant third at just over 14%). Overall spending hit a record $55.7 billion in 2013, enough to apparently cause Del Monte to sell its well-known fruit business, the biggest in the country with a 30% market share, in favor of focusing on its pet food business. It was a little-realized fact that Del Monte was also the fourth-largest pet food maker. 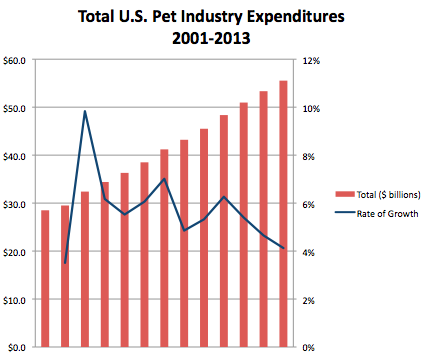 Yet it's also become apparent that the rate of growth is slowing. With more retailers devoting more of their attention to the profit-making centers of pet supplies, namely premium and super-premium food, PetSmart is starting to lag. Wal-Mart, for example, introduced an ultrapremium dry dog food, Pure Balance, that contains no soy, wheat, or corn additives, no artificial colors, no preservatives, and no chicken by-products.

PetSmart has been bolstering its online offerings to counteract the threat that Amazon represents, but repositioning such as that takes time, time it apparently doesn't have as private equity looks for short-term gains. It may be wagging its tail right now to please its masters, but its discussions with investors could lead it to take a defensive posture too, and it could always end up biting the hand that's fed it.