Intel (NASDAQ:INTC) is having a rocky week. On Wednesday, a fantastic second-quarter report led to a 9% share price surge overnight, making it the Dow Jones Industrial Average's (DJINDICES:^DJI) strongest performer by far that day. Today, Intel is one of the Dow's worst stocks, losing 0.6% of its value Friday afternoon.

Intel is a complex beast with tons of market forces pulling the stock hither and yon. But today, two factors seem to be holding the smoking gun:

The first downside catalyst makes sense. Intel shares are up a market-beating 30% in 2014 and 45% over the past year, and like I said, that Wednesday peak set fresh 10-year price records. 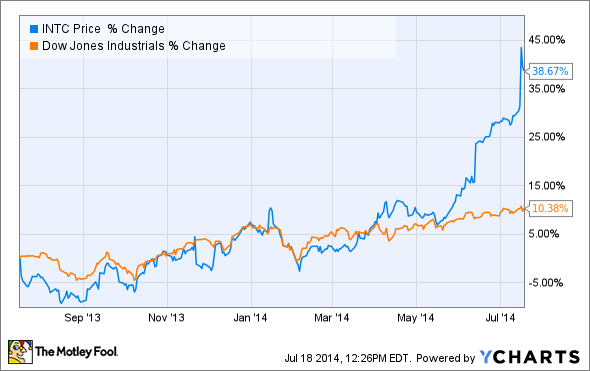 Warren Buffett says that the best holding period is forever, but not every investor agrees. So it makes perfect sense to see a few Intel shareholders cashing in their chips for a generous six-month or one-year gain.

The AMD fallout also seems to make sense -- but that's a mirage.

Sure, AMD set third-quarter guidance far below current analyst projections. CEO Rory Read may say that AMD's turnaround is on track, but the company still can't live up to Wall Street's market analysis as we head into the season for manufacturing holiday gifts and corporate budget-flush hardware. So if AMD is any barometer of the PC market's health, then we're in for a rude awakening this fall.

But what?
Focusing on AMD's weakness would force you to ignore Intel's own guidance. Based on Intel management's market analysis and guidance, 35 of the 38 analysts who cover the stock have boosted their next-quarter earnings estimates this week. The consensus rose 14%. In short, it's fair to say Intel has a far rosier view of the PC market's health than AMD does.

And who would you rather trust to analyze Intel's business prospects? You could listen to Intel's own executives, who have easy access to all of the company's order flows and financial metrics. Or you're free to jump to conclusions about Intel's second-half prospects based on AMD figures that don't depend on Intel's data, don't necessarily apply to anyone other than AMD, and were never designed to reflect the entire PC market in the first place.

Get to the point, buddy
You see where I'm going with this argument. AMD and Intel are not joined at the hip, and one can absolutely succeed while the other suffers.

That's why I think it's dangerous to apply AMD's market forecasts to Intel's business or to sell Intel shares based on AMD's plunge.

If anything, the evidence currently points to Intel crushing AMD just a little bit harder than usual in market segments like corporate PC systems. And where I come from, a near-monopoly that increases its dominant market share even further tends to be a reason to buy the stock.

So one of the Dow's biggest drops today rests, in part, on nothing more than flawed analysis or jittery nerves. AMD's weakness is not a death knell for the PC market, but a buy signal for Intel investors.