For a long time, Apple's (NASDAQ:AAPL) exclusion from the Dow Jones Industrial Average (DJINDICES:^DJI) was viewed as a clear sign that the legendary 30-stock index was outdated and irrelevant. The obvious excuse was that Apple's share price -- in double digits since 2007 and consistently above $200 since late 2009 -- was simply too high for a price-weighted index. Adding Apple would have tilted the balance too much in favor of the tech industry, which was already well represented on the Dow before the iPhone was even an insanely great gleam in Steve Jobs' eye.

By the time Apple stock blew past $400 in the fall of 2011, each of its shares were already more than twice as expensive as the Dow's priciest component, IBM (NYSE:IBM), which wouldn't crest the $200-per-share level for another six months. Even if it had taken IBM's place to prevent complete tech-sector dominance, Apple's influence on the Dow would have still been so overwhelming in late 2011 that it would have taken the next five largest components combined to offset its price swings on any given day.

Of course, now that Apple's shares have been split seven-to-one, these old arguments no longer hold any weight. As it again closes in on triple-digit levels, Apple stock ranks somewhere between American Express and McDonald's among the current Dow components by share price, which would work out to a weighting of roughly 3.5%. And because Apple is, again, far and away the largest company in America by market cap -- second-place ExxonMobil is worth more than $130 billion less than Apple right now, a gap as wide as the one between Cisco (NASDAQ:CSCO) and a lemonade stand -- its continuing exclusion makes about as much sense as the Dow tracking a lemonade stand instead of Cisco.

It seems inevitable that Apple will join the Dow, and likely sooner rather than later. The tech sector is currently represented by six stocks, including IBM's, but because IBM is the only one of the six with a share price significantly higher than $50, those six stocks collectively exert less influence on the Dow's daily moves than three other sectors, even though only one of these sectors actually accounts for a larger part of the American economy. Adding Apple, even if it means giving one of the Dow's five current non-IBM tech representatives the boot, would give the sector a fairer influence over the index's moves.

We shouldn't be asking whether (or when) Apple will join the Dow -- most arguments against were nullified by the split -- but which stock should get the boot to make room for Apple's addition.

If we're going by market cap alone, Travelers would get the boot, as it's barely half the size of the next-smallest component. But dropping Travelers would leave the Dow with no general-purpose insurance-industry representative. Since the sector, as a whole, underwrote more than $1.1 trillion of premiums in 2012, the equivalent to roughly 7% of GDP, it deserves adequate and diverse representation. Maybe Travelers isn't the best insurance company to represent its sector, but insurance, as a whole, should continue to be represented.

It would be a bad idea to toss the Dow's lowest-priced stock, since Cisco is the only clear and unambiguous representative of the part of the economy known only as "the Internet." You could argue that Apple is also an ideal representative of online commerce, because its iPhone led to an explosion in mobile Internet use that continues to this day. But Apple, at its core, has always been a hardware company with great supporting software, not a connectivity company in the Cisco mold. Besides, if the Dow replaces Cisco with Apple, it won't do much to correct its underrepresentation of the tech sector. Cisco stays.

When it comes to odd-man-out companies, the obvious choices to get tossed are either 3M or DuPont. DuPont isn't even the largest company in its own sector, according to the latest Fortune 500 rankings, and 3M is so difficult to classify, that Fortune simply sticks it in a small group of five "miscellaneous" companies, none of which bear much resemblance to the others in the group. Booting 3M or DuPont in favor of Apple would bring the basic materials sector's representation more in line with its true economic weight, so this might be a viable option -- but there's still a better option available, one that would go a long way toward better aligning an unbalanced Dow with the way America's economy actually works. 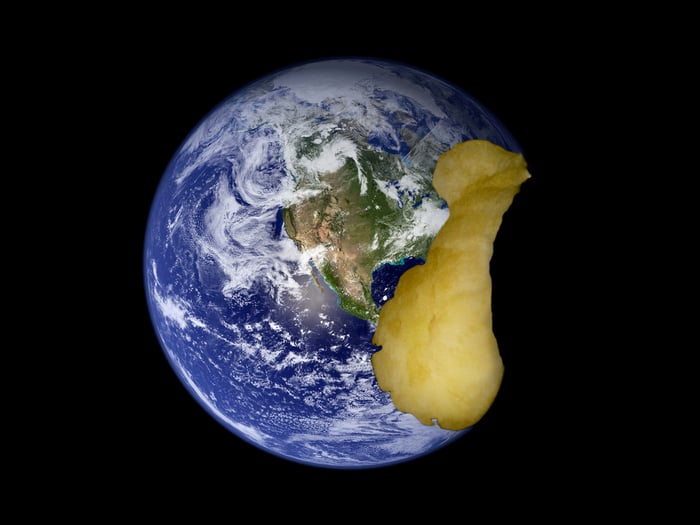 The tech sector and the financial sector each have six representatives on the Dow, but where the tech stocks largely occupy the lower end of the Dow's share-price spectrum, financial stocks dominate the top of the charts. Last year, the Dow added two new financial stocks -- Visa and Goldman Sachs (NYSE:GS) -- and in the process, it boosted that sector's representation by more than 12%, from roughly 15% to nearly 28%, while simultaneously dropping the tech sector's weight from more than18% of the index to less than 14%. These two new additions, which boast the highest- and third-highest-priced shares out of all 30 Dow components, together account for nearly 15% of the Dow's total performance!

Few people would begrudge Visa its place on the Dow, since no company better represents the shift in American consumer buying habits than the one that operates the world's largest credit card network. But what about Goldman Sachs? It's an excellent representative of Wall Street, but only the most devoted trader would argue that a company that makes its money by skillfully pushing large piles of money around is a proper proxy for American industry.

Replacing the vampire squid with the world's largest computer maker (counting tablets along with desktops and notebooks vaults Apple over its rivals by computer sales, and adding smartphones to the tally only helps it pull further ahead), would be perhaps the single most-effective move the Dow could make to bring the sectors it represents closer to a fair weighting:

Sources: Finviz and author's calculations, based on latest reported share price.
Numbers may not add to 100% due to rounding.

This one swap goes a long way toward making the Dow more closely resemble the American economy, and it also puts it in relatively close alignment with the S&P 500, particularly in regards to its tech sector representation:

Sources: Finviz, author's calculations, and Bespoke Investment Group.
Numbers may not add to 100% due to rounding.

Is Apple's addition to the Dow inevitable? It should be, now that there are no longer any share-price excuses blocking its way. But will the Dow make the right choice and remove Goldman Sachs in favor of Apple? That remains to be seen.

Editor's Note: The previous headline "Which Stock Should Get the Boot When Apple Inc. Joins the Dow?" was edited to clarify that Apple has not joined the Dow.

Which Stock Should Get the Boot If Apple Inc. Joins the Dow? @themotleyfool #stocks $^DJI $AAPL $GS $IBM $CSCO Next Article
Current