Please ensure Javascript is enabled for purposes of website accessibility
Log In Help Join The Motley Fool
Free Article Join Over 1 Million Premium Members And Get More In-Depth Stock Guidance and Research
By Travis Hoium - Jul 20, 2014 at 11:30AM

Conflicts are increasing around the world, and thus far U.S. stock markets have ignored to growing risks.

U.S. stock markets continue to shine despite a rising number of broad geopolitical risks posing threats to stability around the world. The Dow Jones Industrial Average (^DJI 1.63%) is within shouting distance of all-time highs as investors gloss over conflicts that could have lasting impacts on the market. 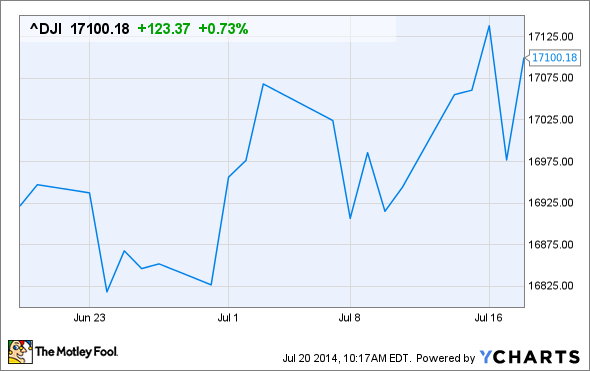 The most concerning is the crash of Malaysian Airlines flight MH17 that was allegedly shot down by Russian rebels in eastern Ukraine. The area has been in turmoil since Ukrainians ousted their previous government, and if it's found that pro-Russian rebels shot down the jetliner, it puts the U.S., Europe, and Russia in tenuous positions.

Of course, the MH17 disaster comes on top of increasing tensions in Iraq and increasing Israeli attacks on Gaza. If any of these situations escalate, it could cause the entire market to pull back and could have a particularly strong impact on energy stocks.

Who may be affected most
Few companies have as much to lose as ExxonMobil (XOM 1.93%), which has a $500 billion joint venture with Russian energy company Rosneft among other agreements in the country. It also has operations in northern Iraq, which has been a hotly contested area as rebels attempt to separate from the central government there.

The greatest risk is that these conflicts lead to lower production, particularly in Russia. ExxonMobil is reducing capital spending from $42.5 billion in 2013 to $39.8 billion this year and will lower spending further over the next three years. The reason is that they're not seeing as high a return on investment as they have in the past, and projects are becoming larger and riskier in locations like ultra-deepwater offshore and the Arctic.

The deal with Rosneft exemplifies the sheer scale big oil now has to pursue just to keep up production. When you add in the political risks that come with doing business in Russia and the tensions that are picking up in the region right now, investors need to be aware that the impact on companies like ExxonMobil could be huge.

Risks are rising
Markets have shrugged off these geopolitical risks so far, but don't be surprised if they react sharply if conflicts continue around the world. It's no reason for investors to panic unless a major conflict erupts, but it's worth looking at the market as a whole with caution, because traders appear to be overlooking many pending risks for the market.

Travis Hoium and The Motley Fool have no position in any of the stocks mentioned. Try any of our Foolish newsletter services free for 30 days. We Fools don't all hold the same opinions, but we all believe that considering a diverse range of insights makes us better investors. The Motley Fool has a disclosure policy.