Shares of The Container Store (NYSE:TCS) have plummeted since the company's IPO last November, as optimism over the purveyor of storage and organization products seems to have faded. After reaching a high of around $47 per share earlier this year, the stock has been cut in half, and a disappointing earnings report from the company earlier this month, along with talk of a "retail funk," has added fuel to the fire. 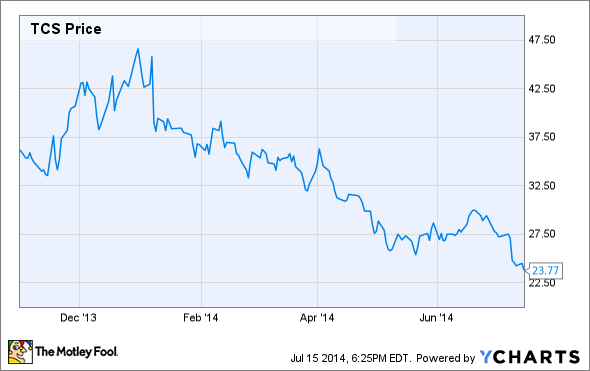 Much has been written about The Container Store; here's a good overview of the company, along with some pros and cons of investing in its stock. The growth story seems to be there, with the company looking to increase its store count by a factor of five over time. It also has a 35-year history that at the very least shows that the concept is sustainable. There's one big problem with the company that I can't get past, though.

Seasonality and costs
In the company's annual report, the following statement appears:

Our storage and organization product offering makes us less susceptible to holiday shopping seasonal patterns than many retailers. In addition, our marketing plan is designed to minimize volatility and seasonal fluctuations of sales across periods.

This sounds like a big positive for the company, as many retailers, especially specialty retailers, see big swings in revenue and profitability throughout the year. The problem is, this statement doesn't tell the whole story. The very next sentence in the annual report is:

Historically, our business has realized a higher portion of net sales, operating income and cash flows from operations in the fourth fiscal quarter, attributable primarily to the impact of Our Annual elfa® Sale, which starts on December 24th and traditionally runs through early February. In fact, in excess of 60% of our adjusted net income was derived in the fiscal fourth quarter in the past three years.

The holiday quarter has higher sales and operating income due to an annual sale. Fine. Backing out the effect of this sale, based on the first statement, sales and profits would presumably not fluctuate much from season to season.

Here is The Container Store's revenue and operating profit broken down by quarter in fiscal 2013:

While revenue doesn't fluctuate too much from quarter to quarter, the majority of the company's operating profit comes during the holidays. It's not that the holiday quarter is simply more profitable, it's that the other quarters are largely not profitable at all. In the first quarter and the third quarter, the company essentially broke even before interest and taxes.

On one hand, the products that The Container Store sells aren't really seasonal. On the other hand, the company is largely unable to turn a profit without a holiday sale. This seems to point to The Container Store's prices simply being too high throughout the year. A gross margin of nearly 60% is nice, but if sales volume isn't high enough to turn a meaningful profit while a sale isn't going on then the prices probably need to come down.

Compare this to a specialty retailer like Bed Bath & Beyond (NASDAQ:BBBY) :

Bed Bath & Beyond is far larger than The Container Store, but the company manages to turn a significant operating profit during every quarter and its lowest quarterly operating margin is still well in excess of 10%. The gross margin for Bed Bath & Beyond hovers around 40%, around 20 percentage points lower than The Container Store. This leads to the conclusion that The Container Store is sacrificing sales volume in order to maintain its hefty gross margin. With the current level of operating costs there isn't much room to cut prices, so the company would need to cut back on the above-average wages that it pays its employees.

The Container Store is in the position where it can't cut costs without giving up its employee-centric culture, it can't lower prices without cutting costs, and it can't increase sales and turn a sustainable profit without lowering prices. The Container Store is just scraping by at this point, and interest from the $350 million in debt is wiping out most of the company's feeble operating profit. Premium brands are supposed to make premium profits. The Container Store appears to only have half of the equation figured out.

The bottom line
When I look at The Container Store, I see a company that barely sells enough product to keep its head above water. The company spends nearly 55% of its revenue operating its stores, a number that looks outrageous compared to Bed Bath & Beyond (which spends 26% of revenue on operating expenses) and essentially every other retailer out there. Even RadioShack, which is on the verge of collapse, only spends 46.5% of its revenue operating its failing stores. I just don't see a good reason to invest in The Container Store. Sure, the company can build new stores, but if they have the same economics as the existing ones then it doesn't seem like the investment is worth it.