Please ensure Javascript is enabled for purposes of website accessibility
Free Article Join Over 1 Million Premium Members And Get More In-Depth Stock Guidance and Research
By Dan Moskowitz - Jul 21, 2014 at 7:00AM

If you want a big clue as to how a retailer will perform in the future, take a look at the job market.

Job market disparity
The unemployment rate ticked down to 6.1% in June from 6.3% in May. However, average hourly earnings increased 2% year over year while consumer price inflation increased 2.1% over the same time-frame. This is a negative for consumer spending. Additionally, the drop in the unemployment rate partially related to an increase in low-wage jobs. This was yet another negative for the real economy (opposed to the stock market).

However, the most telling numbers in regard to the long-term picture for consumer spending appear in the unemployment breakdown by generation:

The problem for Millennials is that entry-level positions are highly competitive. Despite their high unemployment rate, Millennials are still the key to future consumer spending given their enormous size of 89 million people. Generation X only has 49 million people, and not even the Baby Boomers (75 million people) have the population of the Millennials.

Now consider the job growth (and decline) for these three generations from 2007-2013:

So ... what does it all mean for the retailers listed above?

Impact on retailers
Wal-Mart primarily targets the low-income consumer, and younger consumers (Millennials) aren't big on companies with bad reputations. This would seem like a net negative for Wal-Mart, but Wal-Mart is growing quickly in the e-commerce space (sales up 30% in fiscal 2014 to $10 billion, partially because it acquired companies that Millennials don't know are related to Wal-Mart) and consistent growth in its small-box stores.

The latter is a key initiative because Wal-Mart will locate many of these small-box stores in high-foot-traffic areas, where Millennials are opting to live instead of owning homes in the suburbs. Therefore, it's possible, if not likely, that more Millennials will frequent a Wal-Mart brand (Neighborhood Market) in the future.

Additionally, Wal-Mart recently announced that it has seen no change in consumer behavior over the past six months, and that it doesn't foresee any gross margin pressure in the second quarter compared to the first quarter. This is excellent news for Wal-Mart and its investors.

Target is a different situation. It's still dealing with the after-effects of the data breach, poor performance in Canada, and looking for new upper management. Its target consumer is Generation X, which represents 37% of the unemployed and hasn't seen job growth since 2007. This is part of the reason why Target has trailed Wal-Mart and Costco on the top line over the past five years: 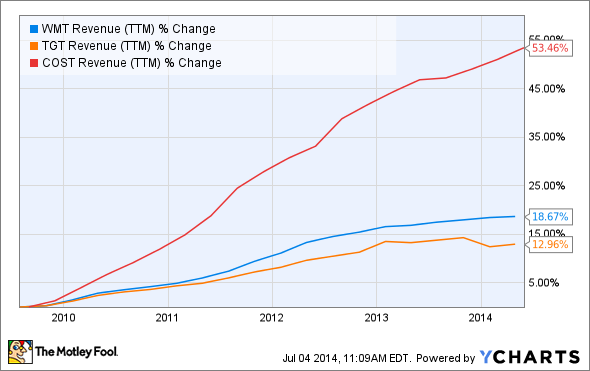 Costco primarily targets Baby Boomers, a wealthier generation that is still enjoying job growth. In addition to the top-line growth seen above, Costco has slowly but surely delivered on the bottom line over the past decade. 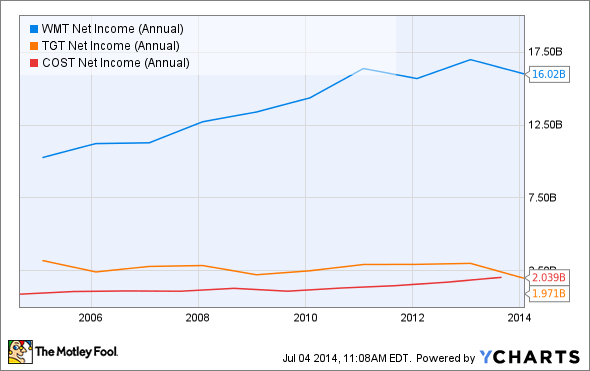 Future generational impact
Given the current job market and the target demographics of the three aforementioned retailers, the most likely scenario is that Wal-Mart will hold its own and grow revenue and profit slightly, Target will continue to struggle until it increases its e-commerce and small-box presence, and Costco will continue to deliver quality results until the Baby Boomer ages and reduces spending.

Costco is increasing its e-commerce presence and adding more natural and organic foods to its stores in order to attract more Millennials, but it won't achieve this easily given its mandatory annual membership fees -- Millennials don't like spending money upfront.

Your investment decision should depend on your investing time frame, but all three of these retailers are innovating at rapid rates in order to cater to the consumer of today and tomorrow.