Last month, there was quite a bit of chatter about the possibility of Anadarko Petroleum (NYSE:APC) being acquired by one of the oil majors. Perhaps the oil major mentioned the most in these discussions was ExxonMobil (NYSE:XOM). In 2013, Warren Buffett's Berkshire Hathaway purchased 40.1 million shares of ExxonMobil, giving it an almost 1% stake in the company. What would the Oracle of Omaha think about ExxonMobil buying out Anadarko Petroleum?

I will answer this question based on the principles embodied in two of his most famous quotations. First, "Rule No.1 is never lose money. Rule No.2 is never forget rule number one." Second, "If, when making a stock investment, you're not considering holding it at least ten years, don't waste more than ten minutes considering it." We can adapt the second quotation to a business acquisition case by understanding the principle to be that a company should make acquisitions to gain long-term benefits.

Applying these principles to this possible acquisition will shed light on two critical questions: Would acquiring Anadarko Petroleum help ExxonMobil strengthen its cash flows, and would the acquisition help bolster ExxonMobil's future productivity? 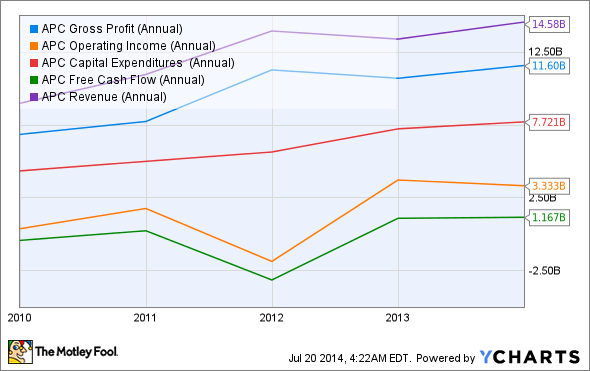 In 2011, Anadarko Petroleum posted a loss that was driven by a settlement and payment to BP for the Deepwater Horizon oil spill. The extraordinary circumstances surrounding the incident constitute grounds to not consider this a violation of Buffett's first rule, especially since it doesn't indicate a fundamental flaw in Anadarko Petroleum's business. We can see this in how revenue and gross profit were greatly divergent from operating income in 2011. This is further supported by the fact that the company has not lost money since 2011. 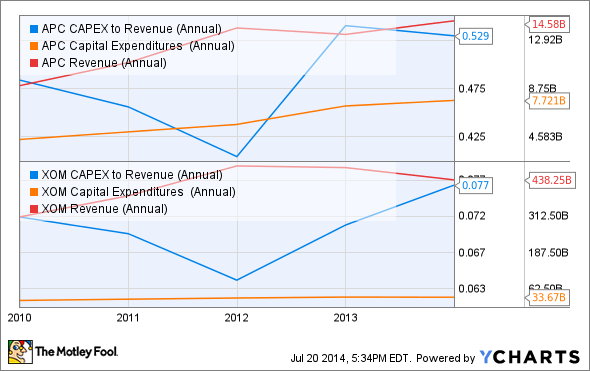 An issue for ExxonMobil is rising capital expenditures with falling revenue. The capex-to-revenue ratio expresses the relationship between how much a company is spending to acquire and upgrade physical assets and how much it generates in revenue on an annual basis. This ratio has been rising for the company since 2012. Greater capital expenditures yielding decreasing amounts of revenue signals that ExxonMobil is having greater difficulty generating revenue.

Acquiring Anadarko Petroleum would help ExxonMobil by bringing an efficient unit under its umbrella that generates revenue and is profitable. Warren Buffett would likely find this point in favor of the acquisition.

Think about 2024 before acquiring
Production growth is a constant concern for any oil and gas producer. ExxonMobil's production has declined for three consecutive years. Additionally, its reserve-replacement ratio -- which measures the amount of proven reserves added to a company's reserves relative to its production per annum -- has been trending lower over the past five years.

A contributing factor to this state of affairs is that ExxonMobil, like other supermajors, has missed much of the American shale boom. Still, the company has made some significant moves over the years to become a shale player. One move was the acquisition of XTO Energy in 2009, which CEO Rex Tillerson described as being not about the near-term, but "about the next 10, 20, 30 years." More recently, ExxonMobil swapped assets with LINN  Energy in May to strengthen its position in the Permian Basin. Acquiring Anadarko Petroleum would help combat declining production and, like the XTO Energy acquisition, help ExxonMobil over the coming decades.

Anadarko Petroleum is a global company, but is particularly strong in its U.S. onshore assets. ExxonMobil would instantly become a major player in the American shale boom after acquiring Anadarko Petroleum, a top Eagle Ford and Marcellus producer. 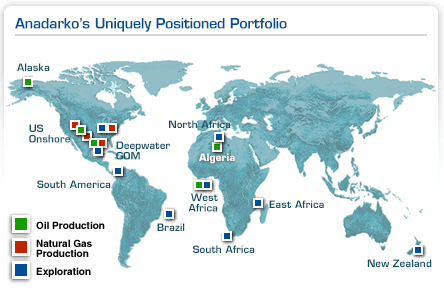 With significant positions in highly productive plays, Anadarko Petroleum has been able to increase production by 7% per year since 2009. The company has set its long-term growth target at 5-7%. Further, it has achieved truly impressive reserve-replacement ratios since 2009.

Anadarko's future prospects appear bright, given its presence in highly productive plays and projected growth. ExxonMobil would improve its production capacity and reserve-replacement ratio by buying out the company. Warren Buffett would likely find Anadarko's projected performance, too, as a point in favor of the acquisition.

Foolish bottom line
A few of ExxonMobil's problems include rising expenditures and falling revenue and production. Anadarko Petroleum's revenue is rising at a greater rate than its capex spending and the company is poised for years of growth. From the two perspectives embodied in Buffett's quotations, it seems that the Oracle of Omaha would have a favorable view of an acquisition of Anadarko Petroleum by ExxonMobil.

What Would Warren Buffett Think About This Massive Acquisition? @themotleyfool #stocks $XOM $APC Next Article
Current