After keeping pace with Starbucks (NASDAQ:SBUX) for all of 2013, Dunkin' Brands (NASDAQ:DNKN) first-quarter earnings fell flat. Both companies report earnings this Thursday and, for Dunkin', it's an opportunity to turn things around. Here's what Dunkin' investors should be watching for when these coffee giants report this week.

Blame it on the weather?
It turns out that Dunkin' was not immune to the polar vortex. Like most retailers, particularly restaurants, Dunkin' blamed poor first-quarter results on the winter weather. That weather seems like a distant memory now, but in the winter it caused more than a few U.S. customers to stay home. The weather excuse holds more water for restaurants because they can't make up lost sales; if you skip Dunkin' one day, you probably won't buy twice as many donuts the next day. For the quarter Dunkin' missed analyst expectations on both earnings and sales, and same-store sales in the U.S. grew only 1.2%.

Starbucks did not need to blame the weather; the Seattle-based coffee chain had awesome growth. In its most recent quarter Starbucks had top-line sales growth of 9%, and same-store sales growth of 6%, but it does have a more global footprint than Dunkin'. Dunkin's highest concentration of stores is in the Northeast U.S., followed by the Chicagoland area, two regions that saw the worst of the rough winter. With that said, Dunkin' Brands international had a decline in same-store sales (-2.4%) as well, which suggests that other factors than the weather are a concern.

Dunkin' is a growth company
While its products, coffee and donuts, may not be sexy, it's important we remember that Dunkin' is a growth company. It trades at a premium, a forward P/E over 20 (right in line with Starbucks), which suggests that investors are expecting big growth. Like all things that "cost" a premium, whether it be golf clubs or stocks, high expectations follow. Here's what Dunkin' is telling us to expect.

In a recent investor presentation Dunkin' reminded us that it expects to double its U.S. footprint of stores. There are very few stores west of Illinois, and the highest concentration is still in the Northeast. Considering Dunkin' has nearly 8,000 U.S. locations already, this is quite ambitious.

Despite its mediocre quarter, Dunkin's guidance for this year was lofty. It's expecting full-year EPS growth of 17-20%, and revenue growth of 6-8%.

With that in mind, for Dunkin' to stay on track for its growth plan we should expect earnings growth over 17% and top-line growth over 6%. Anything lower would put Dunkin' in danger of losing its growth-stock valuation, that it currently shares with Starbucks.

One reason to choose Dunkin' over Starbucks
While Starbucks may carry more cred than Dunkin', depending on who you talk to, Dunkin' enjoys higher profit margins. As the chart below illustrates, Dunkin's long-term gross and operating profit margins lead Starbucks by a large distance. Operating margin, which factors in costs beyond those directly related to the sale, is where Dunkin' really shines, suggesting its operating costs are leaner as well. 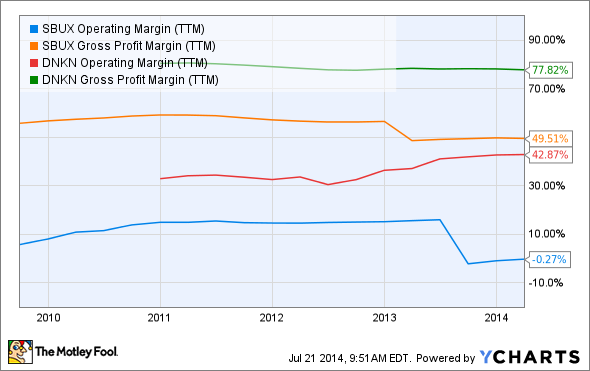 These margins are at the top of my mind, for this quarter in particular, because coffee costs have trended a bit higher as of late (see chart). 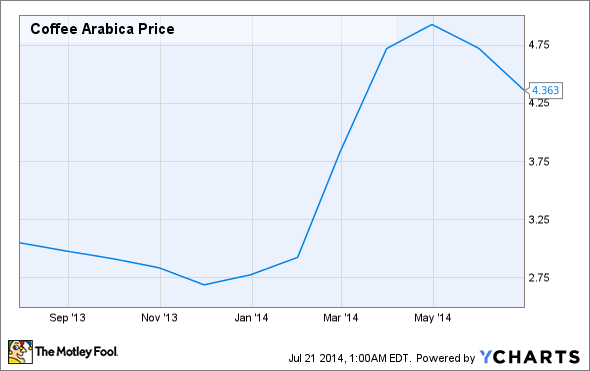 While Baskin-Robbins is not the "high growth" area of Dunkin's business, it does contribute to revenue (26% from either a BR or DD/BR) and profit. Perhaps ice cream can shield Dunkin' from the pain of higher coffee prices, a bit. At the very least the fact that Dunkin' enjoys better margins, while selling a lower priced product, is something to celebrate.

Foolish conclusion: expect a rebound
Considering Dunkin's overwhelming concentration of Northeastern U.S. stores, its "weather" excuse seems plausible. It seems obvious to say it, but we need to see a double in same-store sales this quarter, and top-line growth over 6%. I expect Dunkin' will deliver on both numbers, and return to its winning ways. If it doesn't, things could get ugly.