The market is having a fine day. Every single market sector is trading up in aggregate today, with the vast majority of stocks showing black ink. 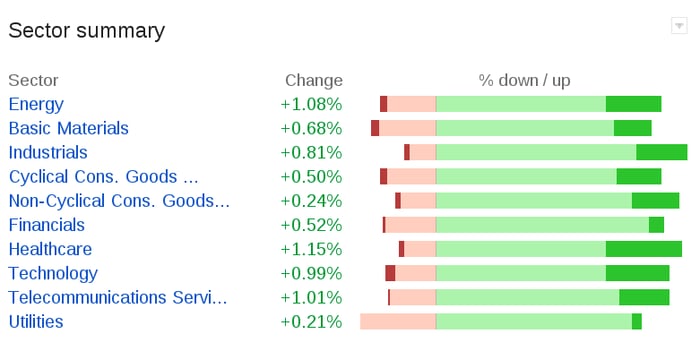 As part of this general market joy, 19 of the 30 Dow Jones Industrial Average (DJINDICES:^DJI) components also traded up as of 2 p.m. EDT. But there's an interesting wrinkle to the positive Dow trend.

In the thick of this year's third earnings season, no fewer than six Dow stocks reported results this morning. Of these six reports, five triggered a downward move in the reporting stock, Tuesday's market euphoria withstanding.

Leading the downward charge, shares of Travelers (NYSE:TRV) fell by 4% on a double whammy: The insurer's earnings per share fell 19% year over year due to large catastrophe losses caused by hail and windstorms during the spring. Travelers was also hit with a court order to cover more than $500 million of asbestos claims in a case with roots dating to the 1980s.

Most of the other early morning reports unleashed far milder share price drops. And then there's a single Dow fish swimming upstream.

Verizon (NYSE:VZ) shares followed the general market tenor more than the trend among results-reporting Dow components. Not far, mind you -- Verizon was up a piddling 0.5%, in line with the Dow's total value change. Of course, Verizon's earnings surprise wasn't huge, but simply meeting expectations was enough to make this report stand out from the crowd today.

Verizon also stands out for another reason: This stock is not riding any overall telecom market surge, either. Fellow Dow member and telephony giant AT&T (NYSE:T) was down ever so slightly.

So Verizon is definitely an odd duck among the 30 Dow components today. The stock is swimming against every trend I can come up with, both positive and negative.

Big Red added 1.4 million wireless subscribers in the second quarter, and all of them fell in the lucrative postpaid contract category. On the wireline side, strong growth in the FiOS fiber-optic services category made up for the never-ending hemorrhaging of wired phone subscribers hanging up on Verizon.

These puts and takes resulted in 0.3% year-over-year wireline revenue growth -- not much, but it's the first uptick Verizon's landline division has seen since 2007.

So why isn't AT&T tagging along for a positive ride? Verizon's coattails should be spacious enough for another rider.

Well, 1.4 million subscriber additions is nothing to sneeze at. Verizon snared just 540,000 postpaid customers in the first quarter, falling behind AT&T. Ma Bell herself only expects to bag 800,000 new postpaid accounts the second quarter. We'll hear all about that when AT&T reports its own results tomorrow morning, but Verizon's strong showing might signal shifting market shares.

So that's how Verizon followed the overall market upward today, without taking AT&T along for the ride.

As for the rest of the Dow, it's a little premature to panic over a handful of disappointing reports. There are six more blue-chip earnings reports to come this week. I would suggest keeping an eye on these reports before jumping to any conclusions about the health of the American economy or large-cap stocks. Let me help: Click here to add this week's pending Dow reports to your Foolish watchlist, or here to keep an eye on the entire blue-chip index.