Wouldn't it be great to know how a company would perform in the future? What if the chief financial officer came out and told you the answers? Would this make you feel better about your investment? Of course it would.

You might be thinking that this only pertains to guidance, which anyone can find with ease, but most people don't listen to a company's conference calls or read its SEC filings and investor presentations. This is how you find key information related to future expectations. So, yes, the following information should give you a better idea of what to expect from Home Depot (NYSE:HD) in the coming quarters.

Home base
Prior to looking ahead, let's first look back, which will give you a good idea of how Home Depot has been performing.

In its first quarter, net sales increased 2.9% year over year to $19.7 billion. This was "below expectations," due to severe winter weather, but be careful with expectations on Wall Street. These expectations lead to short-term stock price swings, which often revert back to the direction a company's stock should be heading based on underlying fundamentals.

In other words, avoid the Wall Street game, which will help you take emotions out of the equation, and strongly consider long-term investments in high-quality companies. As you can see, a sales increase -- regardless of expectations -- is a step in the right direction, but it's not as important as comps sales (sales at stores open at least one year).

Fortunately, comps improved 2.6% for the quarter. This wasn't as impressive as least year's first-quarter increase of 4.3%, but a comps improvement at a home- improvement store during a quarter hit by severe winter weather in much of the country should still be seen as a positive. Better yet, that 2.6% comps increase is an overall number: U.S. comps improved an even more impressive 3.3%. But what's sales growth without earnings improvements?

Net earnings came in at $1.4 billion versus $1.2 billion in the year-ago quarter, and diluted earnings per share improved to $1 from $0.83. It should be noted that the partial sale of HD Supply Holdings contributed $61 million and $0.04 to the numbers above, but there were still quarterly improvements in both areas.

At this point, you might be wondering how the above numbers compare to Lowe's (NYSE:LOW). We could look at Lowe's most recent quarter, but let's take a bigger-picture look instead. 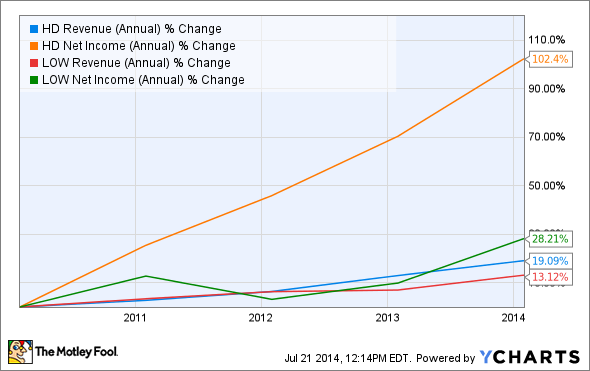 Lowe's has been performing well, but Home Depot has been growing its sales and net income faster, despite its larger size. And if you're more focused on comps sales, Lowe's delivered a 0.9% increase last quarter -- not bad considering the circumstances (severe weather) but not as impressive as Home Depot.

Now let's get to the good stuff...the future!

Guiding you home
Home Depot plans on opening seven stores this fiscal year: five in Mexico, one in Puerto Rico, and one in Canada. This might seem like a small number, but it demonstrates discipline. Many retailers become overambitious and open too many stores, then outgrow themselves. Home Depot isn't taking this path.

In regard to return on invested capital between Home Depot and Lowe's, the following chart paints a pretty clear picture: 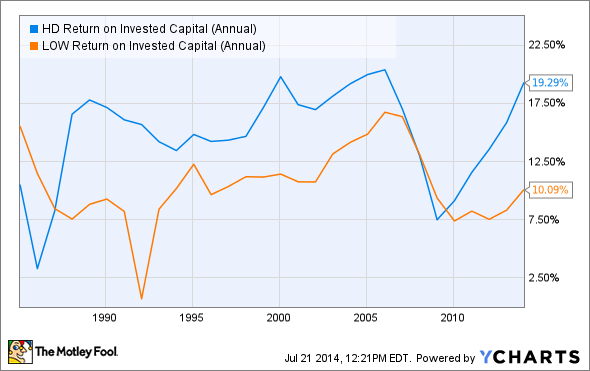 It's also clear that Home Depot is very focused on margin expansion and net income growth. In fact, it has cut management bonuses and leveraged hourly pay, and it keeps its margins healthy by working deals with its suppliers. It has also gone to the extent of reducing store reports by 40%, decreasing store manager emails by 20%, and eliminating unnecessary meetings and conference calls.

All of this is impressive, but it's still not the best part.

Future hints
Carol Tome, executive vice president and chief financial officer, stated on Home Depot's first-quarter conference call that inventory was up a little more than $500 million in the first quarter year over year due to the sales environment, which related to the harsh winter. However, that's not what matters.

Tome went on to say that the sales environment was robust in the second quarter (through May) and that inventory was expected to improve by year-end. Later on the same conference call, Tome stated that the fourth quarter should be the best quarter of the year, with the second quarter a close second.

Think about this for a moment. Keep in mind that the first quarter was weaker than expected due to severe winter weather. Therefore, is should be easy for Home Depot to show first-quarter improvements next year. Combine that with the fact that the CFO of the company just told you that the fourth quarter should be the company's strongest.

It appears as though the ideal entry point has been provided for you -- prior to the fourth quarter. The best part about this plan is that you will have an opportunity to watch the Fed Funds rate, 30-year fixed mortgage rate, and the way the broader market and housing respond to these factors.

The bottom line
Digging deeper on a company isn't difficult. It's just time consuming. Read all SEC filings, listen to conference calls, and read PDFs from investor presentations. You will greatly increase your knowledge on a company. In this case, upper management pretty much provides the answer regarding what to expect going forward. Home Depot's second quarter should be strong but not as strong as its fourth quarter. It's also logical to assume that the company shows first-quarter improvements next year.