Banking done well is a kind of boring business. Accept deposits, make loans, and manage your risks. If you boil it down, that's really what its all about. There aren't really any high flying success stories like you'd see in the high tech or other sectors.

That's why when you see a bank that's hitting on all cylinders, growing like a risk-averse weed, and trading at a hefty discount you get excited.

In this post, we'll take a look at First Citizens Bancshares (FCNCA 0.31%), a $22.2 billion bank headquartered in Raleigh, North Carolina. I'm excited about this bank, and I think that you should be, too.

Let's dive right in
When I evaluate banks, I follow a model made famous by former Wachovia CEO John Medlin: Soundness, profitability, and growth. As investors, we then take a look at valuation and the potential for investment after gaining a better understanding for each bank.

Soundness
Soundness refers to the bank's asset quality. Generally speaking, this means loans. If a bank makes loans that are never repaid, that bank will fail and fail quickly. The best banks put risk management first, ensuring that shareholder capital is protected if a portfolio of loans turns sour.

The provision for loan and lease losses is a reserve of money that the bank pulls out of its income each quarter to guard against future losses in the loan portfolio. Banks are required by regulation to maintain certain levels of reserves, but within that management has plenty of wiggle room to over or under reserve. Over reserving increases protection but hurts net income; under reserving increases risk but keeps net income high.

First Citizens has plenty of reserves for its problem loans. Source: BankRegData.com

These results are both very good and better than the industry norm, but there's another element to soundness at First Citizens that is unique among most banks of this size.

First Citizens is, by and large, a family owned institution. Chairman and CEO Frank Holding Jr. owns 14% of the company. His father, Frank Holding, still holds the title of executive chairman. Holding's sister, Hope Holding Bryant, is a vice chair of the board of directors.

As an investor, it's nice to know that bank management puts shareholder interests first. In this case, there is no doubt that the Holding family does exactly that.

For First Citizens, the first calendar quarter of 2014 fortunately wasn't that bad. The company generated total net revenues of $222.1 million for the quarter -- that is total interest income plus noninterest income subtract interest expense. 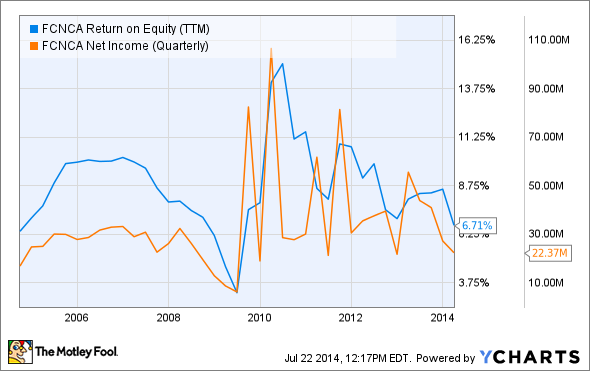 FCNCA Return on Equity (TTM) data by YCharts. Please note that ROE is presented here on a trailing 12 month basis.

Over the past 12 months, First Citizens has generated $979.1 million in total net revenue, and 72% of that revenue was attributable to net interest income, the difference between interest earned on loans and paid out to depositors. The remaining 27% was through fees, trading, or other noninterest revenue sources.

The bank was able to turn a profit margin of 14% on that revenue. The industry averaged around 22%. The bank's lagging profitability, both in terms of profit margins and return on equity is traced back to the company's efficiency ratio. The efficiency ratio measures a bank's noninterest expenses relative to its income. The lower the ratio, the better. First Citizens' reported an efficiency ratio of 85% for the first quarter, which compares to 62% for the peer group.

The bank's premises and equipment expense is also 125% higher than peer, though in raw dollar terms the salary and employee benefits expenses are far more significant.

Keep this inefficiency in mind as we move onto the company's growth below. I see this trend as being a short term symptom of an overall positive strategy.

Leverage
It's at this point we should probably discuss leverage.

Leverage is just part of the game with banks, so if you're a conservative investor who really focuses on conservative capital structures, the banking industry may not be the best place for your money.

Bank's use all kinds of esoteric and overly complex accounting methods to determine leverage. We'll keep it simple here with an old fashioned assets to equity ratio. The lower the number, the less levered (and more conservative) the bank. 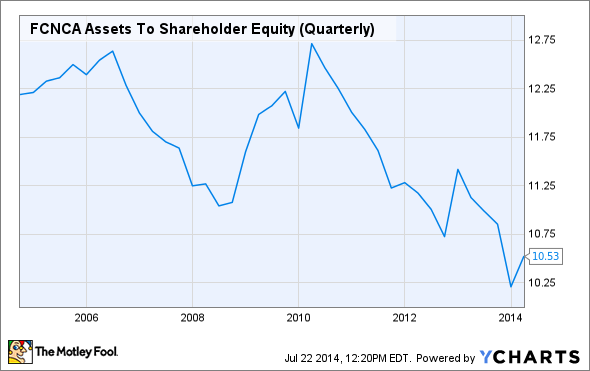 First Citizens' assets to equity ratio comes in at 10.5 times. The average of the 62 banks analyzed in this series of articles was 9.1 times.

Growth and Valuation
First Citizens saw its revenues change by -2.6% over the past 12 months. That compares with the average of the 62 banks analyzed of 5.7% growth.

This change in revenue corresponded with a -13% change in net income over the same period. The peer set averaged a 14.1% increase, and 54% of all U.S. banks saw year over year earnings growth in the first quarter.

The declines in both revenue and net income came in spite of an increase in total assets from $20.8 billion to $21.8 billion quarter over quarter.

As noted above, First Citizens will grow to over $30 billion later this year upon completion of its acquisition of South Carolina based First Citizens Bancorporation. 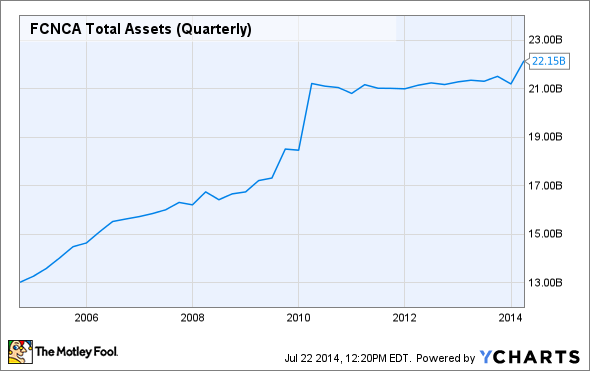 Perhaps more than any other bank in the U.S., First Citizens fully capitalized on buying opportunities presented by struggling banks during the Financial Crisis. As it stands today, the bank has increased total assets by nearly 40% since 2008 and doesn't appear to be slowing down.

When this deal closes later in 2014, the bank will become the largest family owned bank in the U.S. with over $30 billion in total assets, more than 575 total branches in 18 states and the District of Columbia.

This means that by year end, the bank will have doubled in size over a short six to seven year period.

Moving now to valuation, First Citizens traded at a forward price to earnings ratio of 22.0 times according to data from S&P Capital IQ as of the time of this writing. This compares to the peer set average of 16.7 times.

First Citizens' market cap is, at the time of this writing, 1.1 times its tangible book value. The peer set average was 1.9 times.

Based on the factors we've discussed here -- soundness, profitability, and growth -- First Citizens appears to be undervalued.

The bank has acceptable soundness metrics and a management team fully aligned with shareholders to the tune of 18% plus ownership.

The bank's profitability lags the industry to some degree, but that is fully mitigated by the bank's aggressive growth over the past five to 10 years.

The stock has retreated over the past two months as investors adjust for the dilution created in the merger with South Carolina based First Citizens Bancorporation. Over the coming quarters and years, I anticipate a continued aggressive growth strategy via acquisition for this family owned bank. As those acquisitions are integrated into the bank, profitability will improve.

It is not often to see a true growth story in the old fashioned world of regional banking. At 1.1 times tangible book value, this is a story that strikes me as too good to pass up.