Please ensure Javascript is enabled for purposes of website accessibility
Free Article Join Over 1 Million Premium Members And Get More In-Depth Stock Guidance and Research
By Evan Buck - Jul 23, 2014 at 10:19AM

FedEx has recently come under scrutiny from the U.S. federal government for supposedly shipping drugs illegally to online pharmacies. Will FedEx's legal trouble be a significant negative catalyst for the stock?

Shipping company FedEx ( FDX 1.75% ) has been accused by the U.S. federal government for illegally shipping pharmaceuticals to illicit online pharmacies. Rather than capitulate to the charges, like fellow logistics company United Parcel Service ( UPS 0.66% ), FedEx is fighting the accusation in court. Is this development a negative one for FedEx, or will the lawsuit have little to no overall impact on the company's stock? Long-term investors should not buy or sell stocks based only on news events; rather, investors should take news events into consideration along with valuation metrics and a company's financial strength. In the short term, though, the lawsuit could have serious implications for FedEx depending on how the case is handled.

The charges
According to the Justice Department, FedEx is guilty of knowingly assisting illegal pharmacies by delivering packages with dangerous drugs to customers without prescriptions. The feds allege that FedEx shipped anti-anxiety medications Valium and Xanax, the powerful sleeping aid Ambien, and other miscellaneous drugs to customers who had no actual medical need for the drugs. The government also says FedEx purposefully ignored warnings from the Food and Drug Administration, the Drug Enforcement Agency, and several members of Congress.

Essentially, the government is charging FedEx as a drug trafficker, although no specific company executives or employees have been indicted. FedEx is flatly denying any wrongdoing and is vowing to hotly contest the issue in court, unlike UPS, which paid $40 million in a settlement in a similar dispute with the feds.

What it all means for FedEx investors
If FedEx is convicted on the Justice Department's charges, then the company would have to pony up big time. FedEx would be responsible for paying a whopping $1.6 billion fine, almost twice as much as the $820 million the feds say FedEx made off of illicit drug operations. To put this number in perspective, FedEx reported $11.6 billion of revenue and $730 million in net income in the fourth quarter of fiscal 2014.

So, if FedEx does lose its case in court, the company may take a relatively big hit in the short term, which would hurt the company's bottom line. Investors may be spooked from the stock as well, driving down confidence in the brand.

However, FedEx obviously very strongly believes in its ability to fight the government's charges. UPS simply acquiesced to the government's demands and paid a comparatively minuscule fine along with promising to ramp up efforts to combat drug trafficking. FedEx's vehement denial of the Justice Department's claims, on the other hand, demonstrates FedEx's strong belief they have a potent case in their defense.

The big picture for FedEx and UPS
Now that we've covered the FedEx lawsuit, let's zoom out and take a look at the big picture for both FedEx and UPS. The macroeconomic picture is looking brighter for logistics companies. Global trade is increasing, and the International Monetary Fund (IMF) is projecting higher economic growth rates for 2014-2015.

UPS in particular is also making wise choices internationally, specifically by focusing on building company infrastructure in Germany. Germany is the largest economy in Europe in terms of Gross Domestic Product (GDP) and is a key focal point for the continent's economic recovery. UPS recognizes the need to bolster its presence in the region and is taking steps accordingly to fend of competition.

FedEx, on the other hand, may face some stiff competition from DHL in the United States and already has to compete with the company abroad. DHL is the world's leading logistics company, holding 32% market share. DHL is followed by FedEx at 27% and UPS in third with 21%. While FedEx holds a commanding 50% of the market share in the Americas, DHL holds the lead in all other international markets. 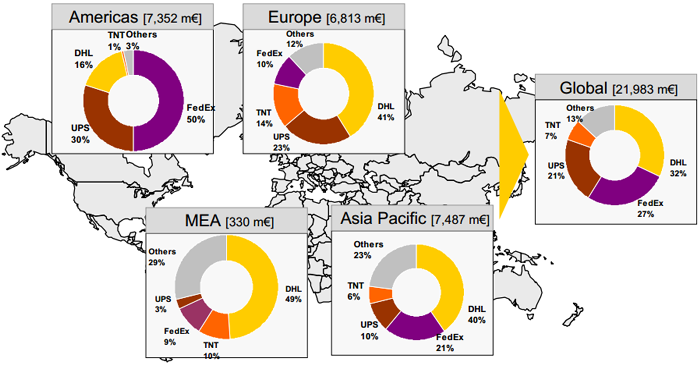 DHL is now making a comeback in the United States, six years after the company withdrew its operations. DHL has a global network covering more than 220 nations. But, on the flipside, FedEx and UPS also offer international services in most of the 220 nations DHL covers. With both DHL and UPS nipping at FedEx's heels, FedEx needs to make itself cost-competitive in order to maintain its market position. FedEx's recently announced pricing strategy effective January 1, 2015 may help, but only time can tell.

Whichever way FedEx's court case goes, I don't believe this event will be a huge long-term negative for FedEx or UPS. At worst, both FedEx and UPS stock may take a slight dip on the news, which would allow investors to buy in to two strong delivery companies with great financial track records. The indictment of FedEx alone should not be a major cause for concern, nor a reason to stay away from either company's stock, whichever way the courts rule on the matter.