Pfizer (NYSE:PFE) investors have had enough of the patent cliff already.

The big pharma giant's loss of patent exclusivity on the world's former top-selling drug, cholesterol fighter Lipitor, has cost its drug revenues dearly. Pfizer's sales have fallen sharply in each of the past two years, declining by 6% year-over-year in 2013 after plunging 10% in 2012. Meanwhile, the company's up-and-coming drugs are taking longer to pan out, meaning that drugs and vaccines such as Lyrica and Prevnar are doing much of the heavy lifting for Pfizer today.

Will the patent cliff strike again before Pfizer can turn this ship around? Teva Pharmaceuticals (NYSE:TEVA) and other top generics makers are looking to pounce on Pfizer's expiring patents as soon as this year. With expirations looming in the near future for big sellers in the company's portfolio, Pfizer's stock is facing a murky future.

Celebrex's December downfall
The patent cliff's taken a bite out of more than just Pfizer's financial statements since Lipitor's patent expired in 2012. Shareholders have felt the pressure as well as this stock's underperformed its fellow American big pharma giants over the past two years. 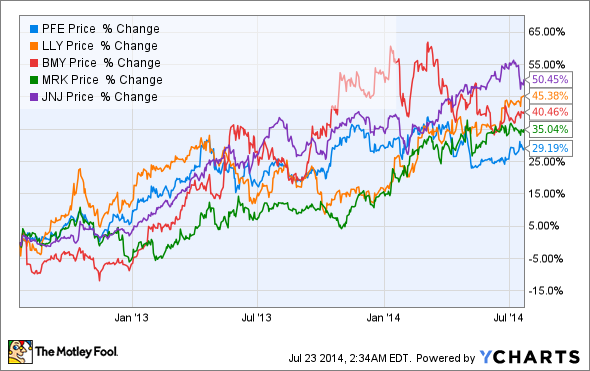 Yet more woes may be on the way. While Pfizer's not facing a single patent loss on the scale of Lipitor -- a drug that once brought in $13 billion per year in peak sales -- several of the company's top drugs in its portfolio will be facing the possibility of generic competition through the end of the decade, starting this year.

Pain-fighting anti-inflammatory agent Celebrex is first up on Pfizer's line of patent blows. Celebrex has been a big winner for a long time, and the drug ranked as Pfizer's fourth highest-selling pharmaceutical product in the first quarter, even as it saw sales slump by 4% year-over-year.

Time's running short for Pfizer's blockbuster, however. The company's fought a protracted battle to stave off Celebrex's patent loss as long as possible, but this year Pfizer negotiated with top drugmakers to allow generic copies to roll out across America this December. Teva Pharmaceuticals has ended up the big winner of this deal, as Pfizer and Teva negotiated a six-month exclusivity window starting in December for three doses of Celebrex.

It's a big boost for Teva, which is currently fighting its own battle against the patent cliff as rival drugmakers look to prey upon the company's Copaxone, which made more than $4 billion last year. Celebrex, as a drug that earned $624 million in Q1, should help mitigate losses from Copaxone when generic copycats emerge. Mylan's (NASDAQ:MYL) also getting in on the action. Pfizer negotiated with Mylan for a similar six-month exclusivity period for the smallest dosage of Celebrex, although the generic drugmaker's fighting against Teva's own exclusive rights.

For Pfizer, however, December's bringing a big hit -- whether it's Mylan, Teva, or any other generics drugmaker getting its hands on this top blockbuster. Down the road, however, Celebrex isn't the only drug that could cost Pfizer in a big way.

Painful hits on the way
Another top-ten drug in Pfizer's portfolio is facing challengers in 2015. Zyvox, the company's seventh best-selling drug in the first quarter, is set to lose its primary patent protection next year -- although formulation and delivery patents extend further. Still, Teva's already earned approval for its own generic version of Zyvox, and investors shouldn't be surprised if this blockbuster -- a drug that picked up more than $1.3 billion in sales last year -- takes a hit going forward.

Viagra, one of Pfizer's most recognizable brands, is already feeling the heat. The drug's sales plunged by more than 8% last year even as it raked in more than $1.8 billion in revenue, a casualty of the drug's European patent expiring last June. Viagra's patent extends in the U.S. through 2020, but Teva Pharmaceuticals once again is capitalizing on Pfizer's loss, as the generic drugmaker will be free to launch its own generic version of the drug in 2017. With more than half of the drug's revenue coming from the U.S., Pfizer's set to take a hit in a few years from Viagra's loss.

But the biggest obstacle looming over Pfizer is the 2018 patent expiration of current top-seller Lyrica. Lyrica, which generated nearly $4.6 billion in revenues for the company in 2013 (good enough for around 9.6% of Pfizer's total biopharmaceutical product revenue), also managed to keep up growth. The drug's been Pfizer's biggest bright spot in its post-Lipitor downturn, as Lyrica posted the highest year-over-year sales growth among Pfizer's top 20 best-selling drugs in 2014's first quarter.

Pfizer won a critical court ruling this year against generic drugmakers in its fight to preserve Lyrica's patent to December of 2018, but when that date rolls around, the company stands to lose a huge piece of its portfolio's foundation.

A foggy future
What's Pfizer's best hope going forward to avoid the same type of struggles that have plagued it since Lipitor's patent loss? The company needs ballyhooed drugs such as blood thinner Eliquis and immunology therapy Xeljanz -- a drug that first loses patent protection in 2020 -- to come through. Both Eliquis and Xeljanz have been hyped as potential blockbusters, but both have gotten off to slow starts. Star vaccine Prevnar, Pfizer's second best-selling pharmaceutical product in the first quarter, also needs to keep going strong, particularly after seeing sales slide in 2013.

Pfizer's pipeline boasted 26 products in phase 3 or later development as of early May, but the bigger winner for Pfizer's future is palbociclib, a breast cancer drug with peak sales estimates varying from $1 billion to $2 billion per year all the way as high as $6 billion. Still, that may not be enough to stave off falling sales in major products, particularly with the patent cliff on the way. A smart acquisition may be Pfizer's best chance now to impress investors in the long term, but for now, don't expect this stock's future to brighten in a hurry.