Please ensure Javascript is enabled for purposes of website accessibility
Log In Help Join The Motley Fool
Free Article Join Over 1 Million Premium Members And Get More In-Depth Stock Guidance and Research
By Dan Moskowitz - Jul 24, 2014 at 8:00AM

The statement that Wal-Mart is the next Sears is becoming tiresome. Make sure you know why this statement is untrue.

Recently, some pundits on Wall Street have been comparing Wal-Mart Stores (WMT 5.11%) to Sears Holdings (SHLDQ). Simply put, Sears was once the largest retailer in the world and now appears to be in a death spiral. Given that the world's new world's largest retailer, Wal-Mart, is having troubles of its own could it too be marked for the same fate? Let's take a look at this argument and see what it might tell us about the future of Wal-mart Stores.

Top line infatuation
Many investors (and traders) love revenue growth more than anything else. Margin expansion, return on invested capital, and cash flow are more important for the long haul, but top-line growth is still important. Since it's likely what you crave most, let's first look at the top-line comparisons between Wal-Mart and Sears over the past five years: 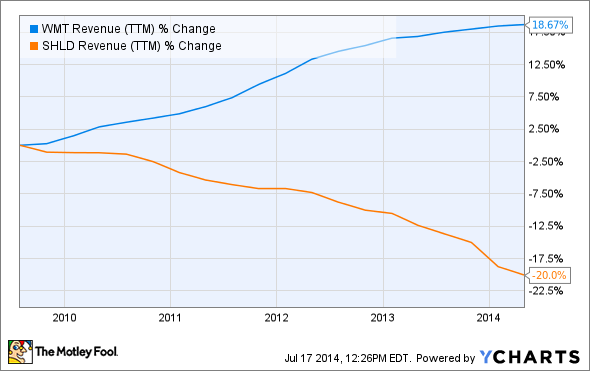 That's a substantial divergence. Many people feel that Eddie Lampert, Chairman and CEO of Sears, is in the process of a slow liquidation of the company. If that's the case, it makes your decision even easier. But let's assume that's not the case.

In this instance, Sears (and Kmart) have failed to deliver merchandise at appealing prices for consumers. This should come as no surprise since Sears is more focused on selling off assets to free up capital than investing in its retail business.

On the other end of the spectrum, Wal-Mart is holding its own in a difficult consumer environment. Yes, it's target consumer (low- to middle-income) is struggling due to reduced government benefits and a lack of wage growth, but unlike Sears, it has several future growth channels. Its Neighborhood Market has delivered 46 consecutive quarters of comps growth, and its digital sales increased 27% in the first quarter year over year. Wal-Mart is also fully invested in beating out competitors in price (offering lower prices); its new Savings Catcher is a prime example.

Wal-Mart is a clear winner on the top line, but that's not the only metric that matters.

3 other key metrics
If you're looking to invest for the long haul, then you can ignore what the broader market is doing and focus on profits. A company delivering consistent profitable growth can put an investor's mind at ease. With that in mind, take a gander at the chart below: 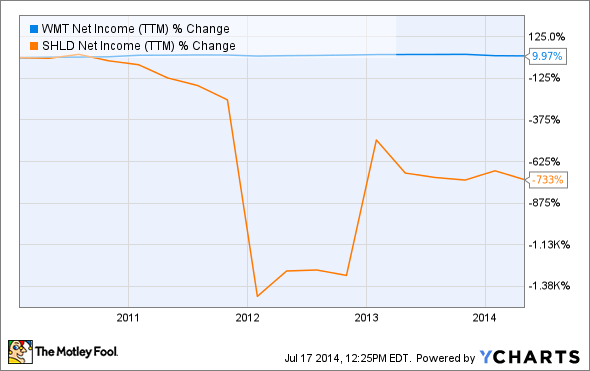 You also want to see free cash flow growth, which allows a company to reinvest that capital into the business and return excess capital to its shareholders. Wal-Mart currently offers a 2.5% annual dividend yield. Sears can't offer this luxury, which is evidenced by the chart below: 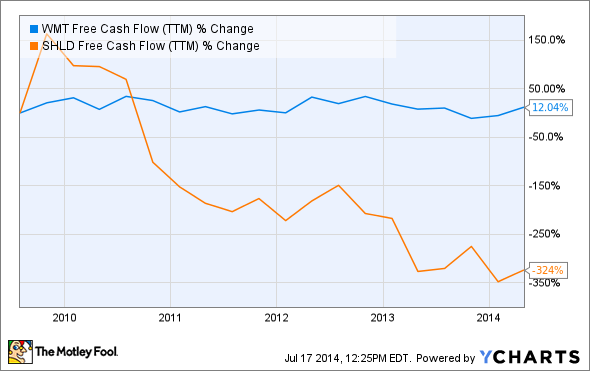 Furthermore, when you invest in any company, you're investing in the upper management team and its abilities. If you want to determine the efficiency of this team, look at return on invested capital. The picture below paints a clear picture: 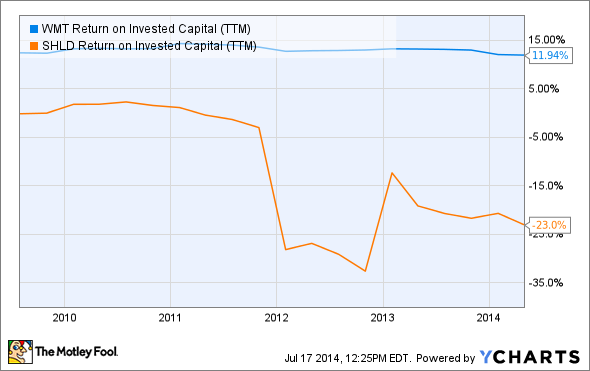 The bottom line
Wal-Mart is not Sears. Wal-Mart's largest growth stage is over, but it's still capable of slow but sustainable growth. The key difference between these two retailers is that Wal-Mart consistently changes with the times and always attempts to stay ahead of the curve, while Sears sat on its hands and hoped for the best. In the retail world, hope fails. Action wins.