The Dow Jones Industrial Average (DJINDICES:^DJI) was down over 120 points as of 1 p.m. EDT. The sell off was broad-based, but the Dow's decline far exceeded that of other indexes in relative terms; while the Dow was down 0.72%, the S&P 500 (SNPINDEX:^GSPC) was only down 0.42%.

This disparity owes to the face that the Dow is a price-weighted index, meaning stocks with higher prices are given greater weight. The S&P weights its components by market cap, which is generally considered a better gauge of broad-market sentiment and will mute the impact of one or two stocks with exaggerated movements.

When a few specific stocks disappoint, the Dow can take a sharp, sudden turn for the worse.

Visa: for better or the worse, the most influential stock on the Dow
The Dow's highest-weighted stock, Visa (NYSE:V), set the tone early. After the bell on Thursday, Visa reported its fiscal third-quarter results. The stock plunged at the outset of trading Friday and continued falling throughout the morning. Visa was down 4% at 1 p.m. EDT. 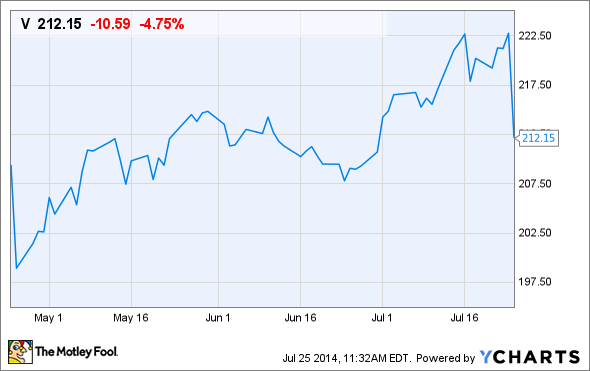 Last night marked the third consecutive quarterly earnings beat for Visa. The company reported $2.17 in operating earnings per share, beating estimates of $2.09. Operating revenue was $3.16 billion -- a 5% gain year over year. The company's performance is directly linked to the volume of transactions across the Visa payment network. Visa reported $1.2 trillion in payments on the network for the quarter, an 11% year-over-year increase (excluding currency fluctuations).

In this case, the market couldn't be more wrong
The market was unimpressed. Investors are anticipating a stronger dollar, which would be a headwind to growth at U.S.-based Visa and would hamper the company's international transaction business. Management lowered its guidance for net revenue growth to the low single digits, primarily because of currency concerns. That change sent investors running.

Taking the long view, this change has little to no impact on Visa's intrinsic value. The company has a fortress-like balance sheet. Operating margins grew from 60% to 64% year over year, and management expects that metric to improve even further. The company expects operating profit to grow at 18% annually!

The world is transactions are changing rapidly, and perhaps no other company is better positioned that Visa. Debit and credit card adoption are widespread in the developed world, and every time a Visa customer swipes their card, Visa gets a cut.

Concerned about payments moving from card to smartphone? Don't be. Visa has strong strategic partnerships with all the major technology players. When you "swipe" with your phone -- in store or online -- Visa gets a cut.

And the biggest potential of all is in the emerging markets.

Digital payments are fueling a revolution in finance in Africa, Asia, and South America as companies bypass traditional infrastructure requirements and go straight to mobile. And which payment company comes pre-loaded on the majority of those phones being distributed across the third world? You guessed it -- Visa.

The bottom line is that Visa will grow as global commerce grows. Forget the currency fluctuations. Forget yesterday's earnings report. Think bigger and think long-term. If the world continues to become more and more digital, then Visa will win. It's just that simple.