Home Depot (NYSE:HD) and Lowe's (NYSE:LOW) have been stellar investments over the past three years. Over that time frame, their stocks have appreciated 137.8% and 123.9%, respectively. With Home Depot trading at 16 times forward earnings and Lowe's trading at 15 times forward earnings, it would appear as though this is a wash from an investment selection perspective. However, as can be seen from the company's recent investor presentation this might just not be the case.

Important comparisons
Home Depot and Lowe's appear to be running neck and neck, but the truth is that Home Depot generates more cash flow, which leads to more generous returns to its shareholders: 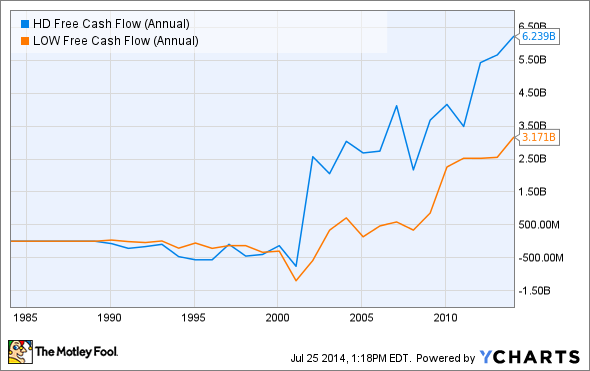 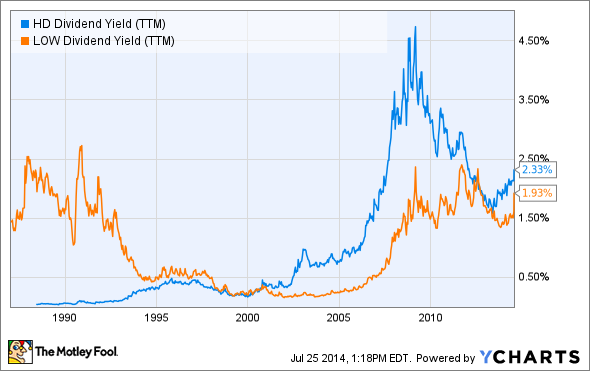 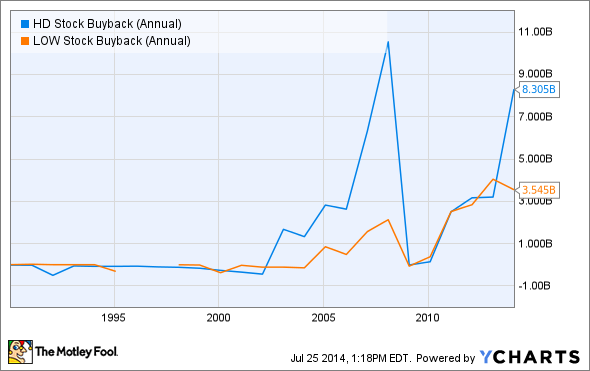 Up until this point, we have established that Home Depot offers an edge over Lowe's for investors (not that Lowe's is a bad option.) Now that this has been established, let's look deeper at Home Depot based on information it provided during its 2014 European Investor Meetings in early June.

Guidance to and beyond the horizon
For fiscal-year 2014, Home Depot expects to open seven new stores: five in Mexico, one in Puerto Rico, and one in Canada. You might notice there are no domestic stores on that list. This would usually be a red flag for a retailer, but Home Depot delivered U.S. comps growth (sales at stores open at least one year) of 3.3% year over year in its first quarter. This number would have been even higher if it weren't for severe winter weather in the Northeast.

The lack of new store openings in the U.S. shows discipline and controlled growth, which should prevent Home Depot from outgrowing itself and allow it to continue to return excess capital to shareholders in a generous manner.

Speaking of returning capital to shareholders, during the European Investor Meetings, Home Depot made the following comment, "We are generating significant free cash, which enables solid repurchases today."

For fiscal-year 2014, Home Depot is targeting $5 billion from excess cash for share buybacks. When a company buys back its own shares, it reduces the share count, which then leads to an improvement in earnings per share.

For the fiscal year, Home Depot expects diluted earnings per share to come in at $4.42 with share buybacks. This would represent a 17.6% increase over fiscal-year 2013. Below is yet another example of Home Depot's outperformance of Lowe's over the years: 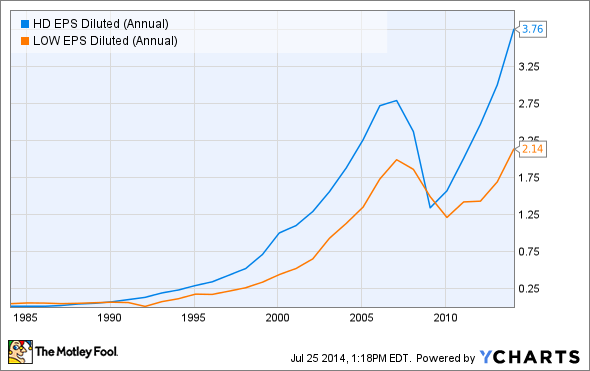 For this fiscal year, Home Depot expects return on invested capital of 24%, and that number is expected to increase to 27% for fiscal-year 2015. Home Depot intends to increase its dividend every year going forward and to return excess liquidity in the form of share buybacks.

Another important point is that Home Depot expects its operating margin to expand 70 basis points to approximately 12% this fiscal year and for that number to further expand to 13% by fiscal-year 2015.

The Foolish bottom line
It's clear that Home Depot does a superb job at returning capital to its shareholders. This is an obvious positive for investors. If you're really digging deep for a potential negative (excluding external events), then you could say that Home Depot should invest more in organic growth; but Home Depot is operating well (not affected by promotions like most retailers) without having to take this approach. This is also a big positive for Home Depot investors and warrants giving the national home improvement retailer a closer look.