Battlefield: Hardline will be pushed back from Oct. 21 to "early 2015," while Dragon Age: Inquisition will be delayed from Oct. 7 to Nov. 18. EA claims in a blog post that delaying Hardline was necessary to incorporate feedback from its beta testing and improve technical stability. EA's official statement regarding Inquisition was similar as well -- that the title needed more polish before being launched.

While this sounds like EA has learned from its past mistakes -- SimCity's server troubles, Battlefield 4's technical glitches, and the recycled environments of Dragon Age II -- the two delays could take a bite out of the company's holiday quarter sales.

How important are Battlefield and Dragon Age to EA?
To understand the financial impact of those two delays, we should study the previous sales of the two franchises.

Has EA learned its lesson about rushing games into the holidays?
Therefore, considering how much Battlefield and Dragon Age matter to EA's top line, why would the company delay either title? The answer is simple -- EA finally realized that quality matters.

When EA launched Battlefield 3 in October 2011, the game suffered from severe game instability, lag, and squad functionality issues. That debacle was a huge embarrassment for former CEO John Riccitiello, who foolishly picked a fight with Activision Blizzard by stating, "We have the superior game engine, a superior development studio, and a flat out superior game" in comparison to Call of Duty: Modern Warfare 3.

When EA launched Battlefield 4 last November, a 40% sales decline between games indicated that fans had lost faith in the series. To make matters worse, Battlefield 4 suffered from even worse problems than its predecessor -- bugs rendered the game unplayable and erased players' save files. DICE, the original developer of the game, was also widely criticized for its poor customer support following the botched Battlefield 3 and Battlefield 4 launches. Therefore, it wasn't surprising when Visceral Games, the developer of Dead Space, took over the series with Battlefield: Hardline. 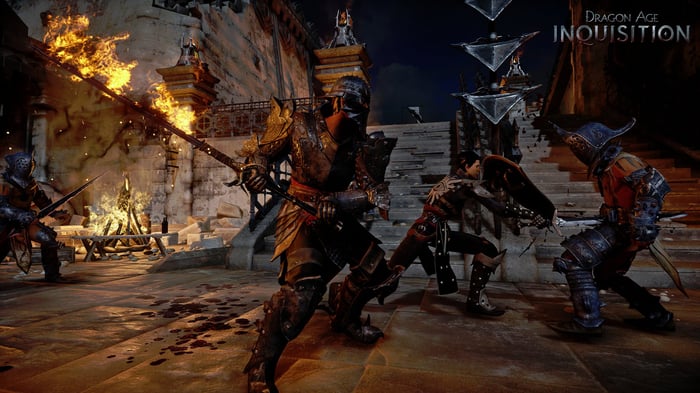 We see similar issues with Bioware's Dragon Age: Inquisition. Dragon Age: Origins was a widely loved title that took over five years to develop. Yet its sequel, Dragon Age II, was developed in less than two years, and it showed through recycled game environments, a shorter main quest, and a sloppily written story. The game alienated fans of the original, and sales plunged.

Considering that Battlefield and Dragon Age are both on shaky ground with longtime fans, it makes sense for Visceral and Bioware to take more time with Hardline and Inquisition before launching them. After all, delayed sales would be preferable to the destruction of an entire franchise.

Avoiding the crowded fall launch schedule
In addition to better quality control, EA is wise to avoid pitting Battlefield: Hardline against big fall shooters like Take-Two's (NASDAQ: TTWO) Borderlands: The Pre-Sequel, Activision Blizzard's Destiny, and Call of Duty: Advanced Warfare. Dragon Age: Inquisition, on the other hand, has less triple-A competition in the role-playing segment, so EA remains confident enough to launch the game ahead of the holiday season.

Missing the holiday season also isn't a huge deal anymore. Game publishers are now launching top games year-round, rather than concentrating all of them on the holidays. For example, Ubisoft (NASDAQOTH: UBSFF) and Nintendo (NASDAQOTH: NTDOY) respectively launched Watch Dogs and Mario Kart, two of their biggest IPs, in late May.

The Foolish takeaway
In my opinion, it was smart to delay Battlefield: Hardline and Dragon Age: Inquisition. Hopefully, EA has realized that short-term quarterly gains from rushed holiday launches are not worth the long-term losses from gamers giving up on a franchise altogether.