Believe it or not, almost half of Wal-Mart Stores (NYSE:WMT) super-centers are located in towns with populations of less than 500,000 people.

This is a much more important fact than you think. Why? Because we as a society are slowly but surely moving towards living in more urban environments. This has major ramifications for big-box stores like Wal-Mart, none of them good. Fortunately for Wal-Mart shareholders the world's largest retailer is aware of this fact and has a solution in the offing.

Likely future developments
Approximately half of Wal-Mart's stores are located in areas with seemingly smaller populations (populations less than 500,000). Inevitably, the company  will attack urban and rural areas to make its brands more accessible to the majority of the U.S. population.

For proof of the urban growth trend, consider the following line from a Time article written in July 2013: "In 2011, for the first time in nearly a hundred years, the rate of urban population growth outpaced suburban growth, reversing a trend that held steady for every decade since the invention of the automobile."

Wal-Mart is already in the process of changing with the times thanks to its small-box stores. For example, its Neighborhood Market stores have seen 46 consecutive quarters of comps growth. According to Bill Simon, former President and CEO of Walmart U.S., Wal-Mart's small-box stores are stealing share from drug stores and dollar stores.

The inevitable losers of this trend are Dollar General (NYSE:DG) and Family Dollar (NYSE:FDO.DL). We'll talk more about them soon, but let's first take a look at a few examples of Wal-Mart's small-box expansion and whether or not it's likely to be effective.

Walmart Express advance
Neighborhood Market has been impressive, but it's not Wal-Mart's only small-box store. Wal-Mart doesn't release numbers on Walmart Express yet, but it has stated that pilot tests have been successful.

Walmart Express stores are only 15,000 square feet (Wal-Mart's smallest footprint) and are located in urban and rural areas with no access to supercenters. Most Walmart Express stores sell groceries, general merchandise, and sometimes pharmaceuticals and gasoline. They allow consumers to get in and out quickly, which fits today's consumer trends well.

When you see what Wal-Mart is doing with its Walmart Express stores, it might remind you of what traditional Wal-Mart stores did to mom and pop shops in earlier decades. A few recent rural developments provide examples.

Walmart Express is making a strong push into East Texas. In Naples, TX (population 1,400), Mayor Danny Mills contacted Wal-Mart and asked for a Walmart Express, but Wal-Mart stated that the town was too small. Pruett's invested $1.5 million, and the people of Naples love the store. Soon after, Wal-Mart announced it would open a Wal-Mart Express in Naples.

In Lone Star, TX, Wal-Mart will open later this year and compete with a small grocer in town. Some people in Lone Star are unhappy about this development, but others are happy because it will bring jobs, sales tax revenue, and property tax revenue. This is an important point. If people living in rural towns feel that it will bring these benefits, then Walmart Express should have no problem weaving its way in to other rural communities.

In Tatum, TX, Walmart Express will be infringing on Dollar General and Family Dollar territory. You might ask why Walmart Express would win against the dollar stores in towns like Tatum. What proof do I have? Good question. Simple answer.

Distribution and convenience
Wal-Mart is in the process of leveraging its size to meet the demands of its customers. These customers want convenience. In fact, many of them don't want to drive to shop. This is a big reason why Wal-Mart is entering the urban market with its small-box stores.

One example of how Wal-Mart plans on leveraging its size and offering more convenience: it's Walmart Express stores feature Internet kiosks, where customers can order merchandise from supercenters that aren't as convenient. Those items will be delivered to Walmart Express. This kind of local distribution system and added convenience is something the dollar stores currently don't offer, thereby giving Wal-Mart an advantage.

Currently, Family Dollar has a strong presence in large cities, but the arrival of Wal-Mart's small-box stores isn't likely to bode well for the company, especially since many Family Dollar locations are in need of repairs and upgrades. Dollar General has already been stealing share from Family Dollar. Therefore, if you're going to invest in one of these dollar stores, assuming it can thwart the threat of Wal-Mart's small-box advance, then you might want to consider Dollar General first. Below is a simple chart demonstrating the differences in top- and bottom-line performances over the past five years: 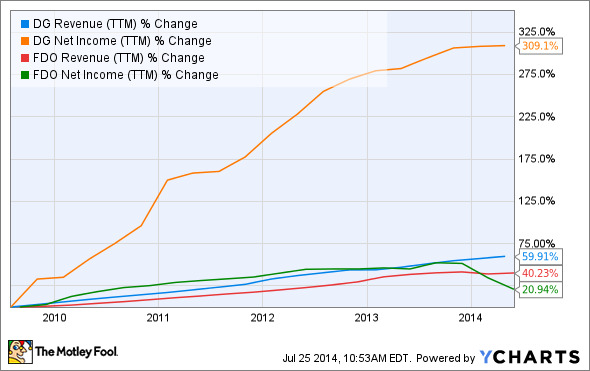 Getting back to Wal-Mart, another thing to keep in mind is that if nearly half of Wal-Mart super-centers are located in areas with declining populations , then Wal-Mart is likely to close some under-performing super-centers (10% of super-centers aren't performing well, according to Wal-Mart's first-quarter conference call.) This would free up more capital, which would then be put toward the aggressive advance of its lower-capital-cost small-box stores. This, in turn, would aid profitable growth.

The bottom line
Wal-Mart as it stands today is a retailer that's holding its own in a difficult consumer environment, but we need to be looking forward. Wal-Mart's strategy shift should lead to market share gains, reduced costs, and increased profits. All in all, Wal-Marts increased focus on smaller stores make the world's largest retailer worthy of a closer look by Foolish investors.